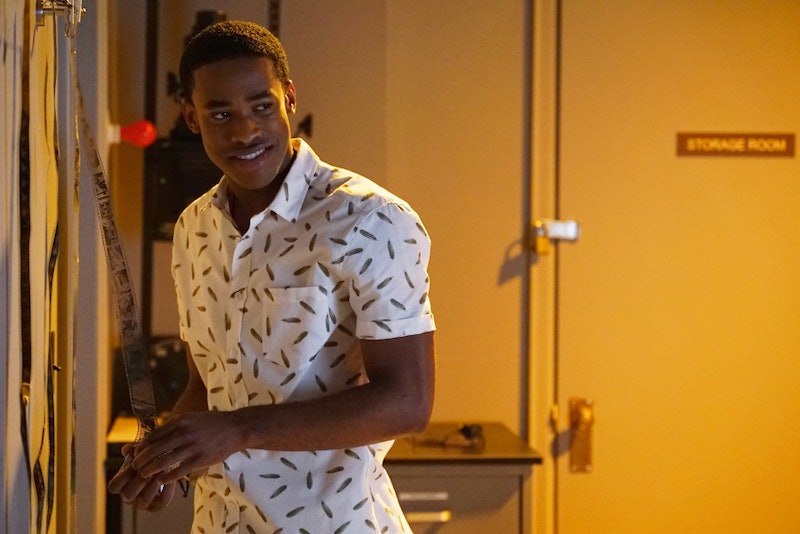 There are a lot of new faces in Rosewood these days. Sara Harvey, Lorenzo, Sabrina, and now Pretty Little Liars Season 6 introduces Clark, one of Aria's fellow aspiring photographers at Hollis. But don't let that description fool you into thinking that Aria met this new character met this guy by saying a friendly hello in the hallway. No, because this is PLL , Clark, played by Titus Makin Jr., met Aria by helping her escape the darkroom A had trapped her in just as she was really starting to panic. His timing was convenient... very convenient. Can we trust him? For Aria's sake, I hope so, because the last flirtation she struck up didn't exactly end well.

So far, there's no reason to distrust Clark, other than the fact that he's a guy who lives in or near Rosewood. But he's not a Rosewood cop, the major red flag surrounding Lorenzo, and doesn't seem completely unhinged, like Sara. He's just a nice guy who helped calm Aria down after she found a foreboding A note and was locked in the darkroom. Later, they discussed her, um, interesting photography, and he didn't seem too prying or to have any intentions other than a friendly chat.

Am I being too easy on Clark? Maybe, but after the darkness and heartbreak that made up "Don't Look Now," I just want to believe that he's nothing more than a flirty guy who dreams of working for National Geographic. But this is Pretty Little Liars, where everyone has a secret, so I'll try not to get my hopes up. For more on the guys of PLL, check out Bustle's new podcast, "Taking This One To The Grave."

More like this
Every Horror Movie Reference In The 'PLL: Original Sin' Premiere
By Alyssa Lapid
The 'PLL: Original Sin' Creators Say A’s Identity Will Be “Very Clear” By The Season Finale
By Alyssa Lapid
Molly-Mae Hague Has Secured Herself A Pretty Little Fortune
By El Hunt
Megan Thee Stallion Actually Auditioned To Be This 'P-Valley' Main Character
By Radhika Menon
Get Even More From Bustle — Sign Up For The Newsletter