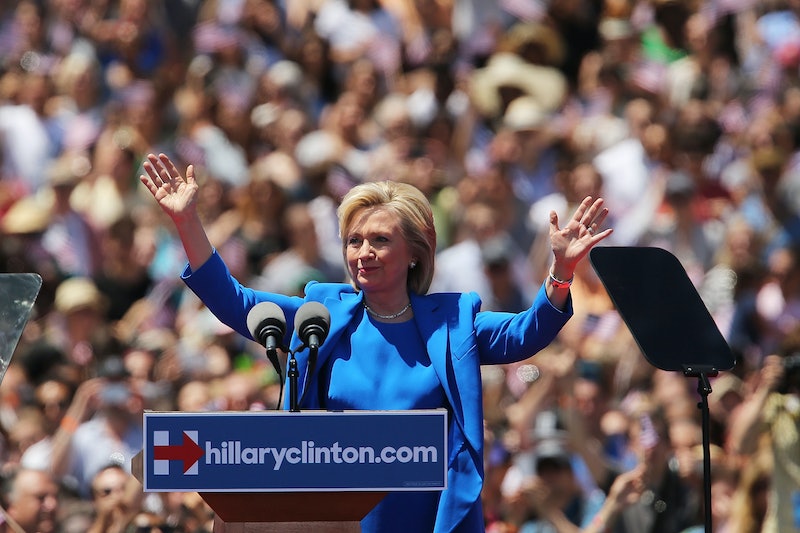 Though the Democratic primaries are far away, and she has yet to win the nomination, everyone is already wondering who Hillary Clinton will pick as her vice president and running mate. It's not a stretch to say that Clinton will likely win the nomination. Among Democratic candidates, she is coming out far ahead in polls, and she's almost as much of a pop culture icon as she is a powerhouse politician.

Some sources believe that the Clinton campaign has already found their desired vice president in former San Antonio Mayor Julian Castro, who currently serves as Secretary of Housing and Urban Development under President Obama. Like Clinton, Castro would also represent a "first" by becoming the first Latino vice president if elected. No offense to Castro, as I'm sure he would make a wonderful vice president, but I think Clinton needs someone with a bit more "umph" behind her name, who will not only support Hillz through her campaign, but also be a trusted friend and ally.

When picking a vice president for the future President Clinton, she should choose someone who will add to the mythos and following the Clinton cultural sensation, someone who has a following in her own right. We've selected five dream girl power tickets that we'd love to see because Clinton should obviously choose uteruses before dude-ruses.

Move aside Julian Castro — there's only one clear front-runner in the race to be Clinton's best friend and ticket mate, and that person is Leslie Knope. It's the political match made in heaven. Leslie's neuroticism and attention to detail would obviously be an asset to the campaign and presidency, while Clinton's levelheadedness would keep Leslie in check.

Binder-making skills aside, Leslie also has some friends in high places, like former Secretary of State Madeleine Albright, who could probably offer some wonderful words of wisdom (and also would be an awesome potential running mate in her own right). And don't forget her friendship with John McCain. Though he didn't end up being president and he's on the GOP side, it never hurts to get advice from someone who has run a full campaign. But the most important asset that Leslie would bring to the vice presidency is her unwavering friendship and loyalty. And out on the campaign trail, Clinton will need all the support she can get.

Donald Trump (shockingly) had a pretty good idea when he mentioned selecting talk-show host and self-made tycoon Oprah Winfrey as his running mate because "everyone loves Oprah." Unfortunately for Trump, Winfrey bats for the other side of the aisle. Though she's admitted to not really being into politics. she did endorse her friend, aka Obama, when he ran for office, so it's not too far a stretch to think she would endorse the possibility of the first female president.

Winfrey could bring a lot to the position, considering she's a self-made billionaire and obviously has a lot of business savvy. Winfrey also is a shining embodiment of the American dream. She was born in one of the poorest areas of Mississippi to a single teenage mother. She knows the pain and hardships that too many Americans have experienced, and she would be a breath of fresh air in Washington with her attempts to combat these burdens.

When it comes to political figures with huge followings, you can't dismiss Supreme Court Justice Ruth Bader Ginsburg. With the exception of Clinton, Ginsburg is probably the only woman in Washington whose face appears on a multitude of T-shirts. The Notorious RBG clearly isn't afraid of the spotlight, as she gives more appearances and interviews than any other Supreme Court Justice. Sure, she's 82, but she's still a spring chicken. I am very confident she would be up to the rigors of a campaign (and let's be real, the vice president doesn't have to do much, so that job wouldn't be very taxing for her).

Ginsburg would be an ideal running mate because she's not afraid to speak her mind and dissent every now and then. Ginsburg is a feminist for the ages and a perfect companion and confidante to Clinton. The only downside of having Ginsburg as a vice president would be getting her to stay awake (and sober) during the State of the Union.

The Massachusetts senator has been extremely vocal about the fact that she is not running for president, and I'm starting to think she's been a little too vocal. Perhaps the lady doth protest too much, and she's actually building suspense for when Clinton announces the Clinton-Warren 2016 ticket. And after all, two senators are better than one. Sometimes.

Though Warren is known and loved for being fiercely liberal, her history shows that she's not afraid to evolve and change her way of thinking. Surprisingly, the consumer protection warrior used to repeatedly vote Republican and has said she will continue to vote both ways because she doesn't think one party should dominate over the other. I don't know about you, but that's the kind of logic I want to see in the White House.

You literally cannot say pop culture icon without immediately thinking of Beyoncé. Although Beyoncé hasn't announced her Clinton endorsement as clearly as her feminist ideals, the diva did attend a Clinton campaign fundraiser in May. I know it's a long shot that Beyoncé would put aside her music career for a political one, but no one can deny that she would bring a fierce voting base with her. Clinton has even attempted to appeal to Beyoncé fans during campaigning because she knows the power of the Beyhive. It would be the dark horse ticket for sure, but can you imagine if they won? Move aside, Queen B, here comes VPB.

More like this
A Political Thriller Inspired By The Munich Massacre Is Coming Soon
By Darshita Goyal
We’ve All Had Bad Sex. Nona Willis Aronowitz Is Talking About It.
By Sophia Benoit
Naomi Osaka & Emma Raducanu’s Experiences Have Inspired A New Amazon Show
By El Hunt
Why Eurovision 2023's Host City Won’t Be Revealed For A While Yet
By Sam Ramsden and Rachel Mantock
Get Even More From Bustle — Sign Up For The Newsletter