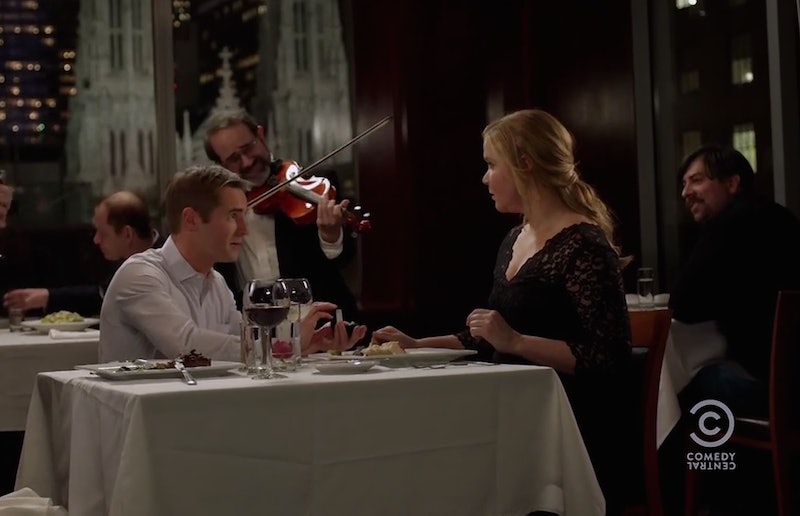 Ladies, have you ever had that dilemma of when to tell a guy you have a boyfriend if it feels like he might be hitting on you? If you tell them too soon, they'll call you arrogant. But if you wait too long, you're stuck in your lie and telling the truth too late makes everything worse. Amy Schumer understands your problem. On Tuesday night's episode of Inside Amy Schumer the comedian pointed out this problem with her 'I Have A Boyfriend' sketch, and proved that it's actually a really annoying way that gives men the advantage over women even when women are in the right. Schumer attends a cocktail party where her boyfriend goes to the bar to make her an overly complicated drink. Meanwhile she gets hit on by two different men asking to get her a drink. When she casually and politely states that her boyfriend is already getting her a drink, they insult her for thinking they would ever want to hit on her. "Pretty arrogant for a three," one of them states as he walks away. So when another man asks to get her a drink, she just says yes and things spiral out of control.

Soon Schumer is back at the man's apartment hooking up with him, and the scene shifts to six months later, one year later and finally to the end of the man's life where she finally reveals the truth.

And even at that point, the man calls her "arrogant" and states that he was never into her. He only married her because he was gay and needed a beard to keep his job at Haliburton. Much like most of Amy Schumer's insanely hilarious sketches, this one is so funny because it's so damn true.

More like this
The Kenan & Kel Reunion On SNL Took A Dramatic Turn, Thanks To Keke Palmer
By Brad Witter
Keke Palmer Just Announced She's “Going To Be A Mom” On SNL
By Brad Witter
Another 'Sex Education' Star Has Joined The 'Doctor Who' Franchise
By Darshita Goyal
The First Trailer For 'That '90s Show' Includes So Many Nods To The Original Series
By Jack Irvin, Alyssa Lapid and Grace Wehniainen
Get Even More From Bustle — Sign Up For The Newsletter