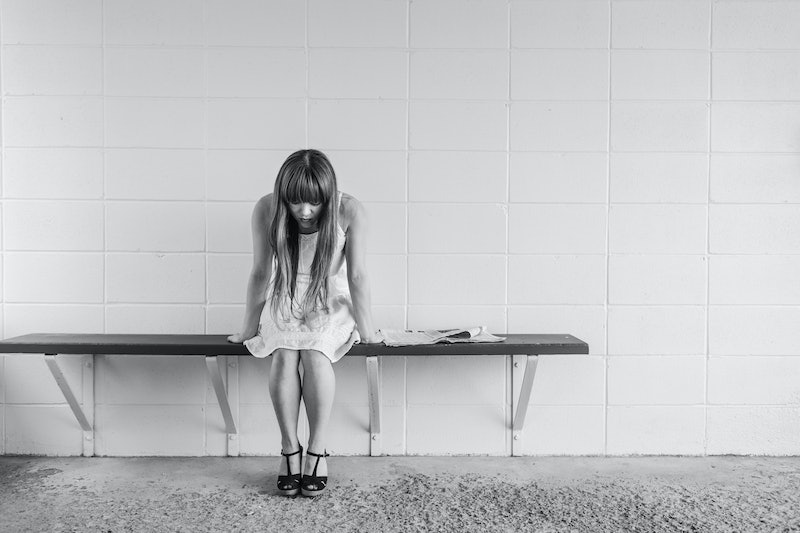 Depression is, in many cases, still seen as a "First World," Western disease. And in the cases of many sufferers, families and friends may simply not believe in its existence, instead labeling it as exaggeration, laziness, selfishness, or an attempt to punish other people. Understandably, if you're already struggling with serious negative thoughts and imbalanced brain chemistry, this is not going to help. But how can you explain depression to the non-believers?

Depression is a fact. It was not invented by Big Pharma; melancholia has been a recognized condition throughout the centuries, and while we're only just beginning to understand how it manifests in the brain, it definitely exists. But explaining it to people who come from a position of denial poses a lot of problems. One is that depression differs wildly from person to person, and that there are at least nine different types, including situational depression, postpartum depression, dysthymia, and major depression — so it's difficult to make it understandable in a one-size-fits-all way.

Another is that depressive symptoms are often misunderstood as escapable by pure force of will: it's not like you turn purple and swell to the size of Nevada. You can't defeat measles by thinking really positively. The symptoms are mental, which means it's harder for people to conceive of them as serious, outside your control, and medical in nature. Plus, mental illness is still, in some areas of society, a taboo, suggesting that you are in some way "wrong," "dangerous," or "broken" — which may make it difficult for others to accept the diagnosis.

Experiencing depression in an environment that doesn't support or believe in it is going to be extremely challenging. (Believe me, I know.) Here are a few ideas to help you explain the situation, in a way that might turn their perspective around.

1. Ask about why they don't believe in it.

This could be the real key to figuring out what's going on and convincing them to think otherwise. Do they think depression is an invention? That our happiness is all down to our willpower and mental strength? That it only happens to weak people or the confused?

This will likely get difficult for you — depressives do not, understandably, cope well with being told it's all in their heads and they're failures — but it may be necessary. We're formulating a plan of attack here, and you need to know the opponent's position.

2. Be frank about how much you're struggling.

Openness about the seriousness of your struggle and how dark things have become may be the spark that's required for them to believe you. Do not hold back: the sleeplessness, the weeping, the self-harm, whatever you're feeling, all there on the table. Be frank and calm; do not exaggerate, appear as rational as possible, and rehearse it a bit beforehand if you need to.

Parents, family, and friends who don't like hearing about emotions will not appreciate this approach, in which case it's possibly better to target them with the science first (see #5).

3. Be prepared for ignorant questions and outright rejections.

"But last week, at Emily's wedding, you were smiling!" "Oh, you're just exaggerating for attention, stop it." "If you really wanted to stop being sad, you could." These kinds of comments might be thrown at you. If possible, do not get into a position where these things could be said if you're not ready to deal with it.

Chances are, you'll have heard this sort of song-and-dance before. Rehearse answers, if rational answers can be had. For instance, explaining that depression can come and go, or outlining your own efforts to defeat depression with pure willpower (see #4). And minimize accusations of attention-seeking by having this conversation privately.

4. Highlight your wish to get better, and how denying it isn't solving anything.

You will possibly be told you could decide to snap out of it if you wanted to, or weren't so weak. It's valuable, in these situations, to have a counter-argument prepared: how you've tried to combat it on your own, and couldn't. (Because that is how depression works. You can't just magically talk yourself out of it.)

Tell them all the things you wish you could still do — get out of bed, see friends, enjoy what you once loved doing — and the invisible psychological wall standing in your way. Leave it in no doubt that you are trying. Because you are, and you're very brave.

5. Have the science on hand.

This won't help for everybody, but if they're the kind of people to pay attention to facts and figures, have studies and respectable websites on hand to prove that it exists.

I once overheard a father tell his daughter a meant-to-be-helpful story about a coworker who "thought he was depressed, and he walked around all day so sad, so upset, but then he went home and it was just gas!" Science may not be able to combat that kind of thinking, but a link to the Royal College Of Psychiatrists, the Washington School of Medicine, or even the World Health Organization may come in handy. WHO lays out the devastating fact that 350 million people worldwide suffer from depression, the Washington School points out that 17.5 million Americans have some form (and that it's likely to be inherited), and the RSP outlines the benefits of common treatments.

6. Back up diagnosis with validation from somewhere they trust.

Hell, even Fox News treats depression as a valid mental illness. If the non-believers are more likely to believe a doctor than you, get a doctor; look for positive quotes about depression from politicians or parties that they follow; and if they look to religious leaders for guidance, cite them.

There's widespread openness about depression among pastors in the Christian faith, for example, and Islam has positive views on helping depressives. (This last decision may backfire, though: there's a strand of evangelical Christianity that believes depression is a choice and can be cured by prayer alone.)

7. Be wary of comments about simply "getting over it" with drugs.

"So you're depressed. So you take a pill, you're fine, right?"

This is a particularly tricky conversation if the people you're convincing are the ones who would pay for these options. If you can, try to research the easiest, cheapest, and most convenient options locally, from therapy to regular exercise to antidepressants.

Also, some people accept the depression but refuse point-blank to accept your taking drugs to defeat it. This isn't uncommon, but remember, these medications can be very useful, often lifesaving, things. Only you and a doctor can know what's right for you.

8. Convey that recovery is going to take a long time, if ever.

Some people will never come around to the idea that a person they love and respect has an illness they don't believe in (or think only happens to a "certain type" of person). This is, unfortunately, one of those tricky parts of life that make for fantastic novels and sh*tty family reunions. Try to be kind and understanding. I know it sucks. I am here, and I believe you, and even if those close to you do not, there will be people who do.

9. Understand they may treat you differently.

If they do come around, having a family or support circle who do believe you're depressed may not be more fun than one that doesn't. They may not understand you, catastrophize, get scared for your safety, ostracize you socially, worry that you're ruining their reputation, or keep you away from others to stop it from "spreading".

This is a new frontier, in which you'll have to target an entirely new enemy: preconceptions and myths about mental illness. Be prepared for the future to require even more hard work, but be assured that help is out there.