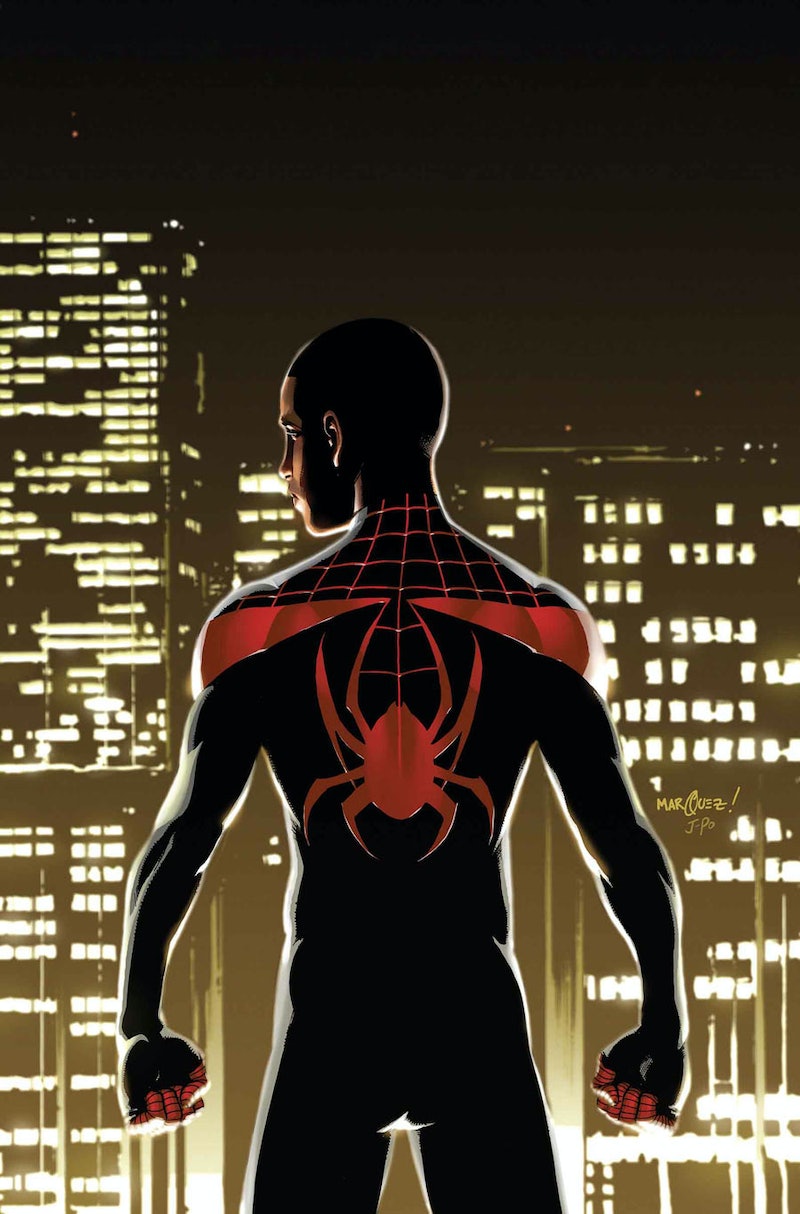 You can't talk about Marvel without talking about Stan Lee, who's of course famous for creating Peter Parker and Spider Man. And, as his creator, the former president and chairman of Marvel Comics has some things to say about the new bi-racial Marvel Spider-Man. In an interview with Newsarama, Lee questions the new Marvel Spider-Man Miles Morales — a bi-racial black, Latino teenager who puts on the spidey suit.

Lee says in the interview that he believes there should be black, Latino, and all kinds of diverse superheroes. But they should be created that way originally, not transformed to be. Lee says:

I wouldn’t mind, if Peter Parker had originally been black, a Latino, an Indian or anything else, that he stay that way. But we originally made him white. I don’t see any reason to change that. ... It has nothing to do with being anti-gay, or anti-black, or anti-Latino, or anything like that. Latino characters should stay Latino. The Black Panther should certainly not be Swiss. I just see no reason to change that which has already been established when it’s so easy to add new characters. I say create new characters the way you want to. Hell, I’ll do it myself.

Lee has also previously gone on record in Newsarama saying that his favorite part, and the most essential part, of Spider-Man is his head-to-toe costume that doesn't reveal any aspects of his features in the real world:

What I like about the costume is that anybody reading Spider-Man in any part of the world can imagine that they themselves are under the costume. And that’s a good thing.

In addition, back in 2010, Lee supported actor Donald Glover's campaign to be the next Spider-Man in the movies, which sadly hasn't happened yet.

Glover is part of the inspiration for as Miles Morales, who is drawn based on the likeness of Glover and President Obama. The Miles Morales Spider-Man storyline began as part of the Ultimate Marvel universe. Marvel has countless storylines, characters, and universes. And so, to streamline all of these elements, Marvel planned a large-scale reboot to begin in 2015, for the first time in around 75 years. Leading up to the reboot, we have the Ultimate Marvel universe, where our favorite characters — Tony Stark, Bruce Banner, the X-Men, the Fantastic Four, and yes, Spider-Man — are re-imagined from the beginning of their origin story. To start the reboot, this universe and our existing one smash into each other, and, to put it simply, only the best versions of the characters survive.

This time, Miles Morales has won out over Peter Parker. But it seems based on his recent reactions, Stan Lee was in favor of a Parker win.

It's hard to fully blame Lee, who after all created the iconic Peter Parker and Spider-Man and has a horse in the race, but no "new" Latino, gay, or, hey, even female, character is going to win over the spotlight and adoration like putting a diverse character into an already beloved role. Yes, it has started controversy, but it should also kickstart progress, showing established artists and writers that it's more than OK to have diverse superheroes. Look at how successful the female Thor is already. All steps in that direction are positive.