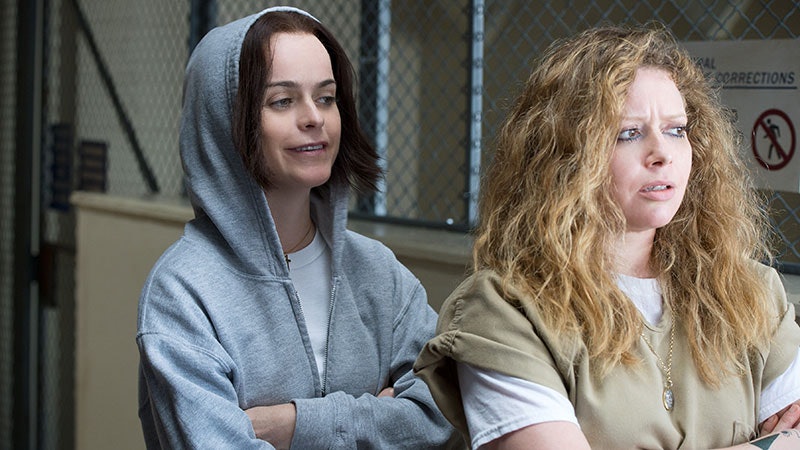 Whether they're flawlessly shutting down gender stereotypes or singing behind the scenes, the Orange Is the New Black cast always reminds us why they're our favorites. On-screen, they give us a wide range of complex, flawed inmates who we can each relate to on some level. In other words, we feel like we've gotten to know them more and more each season.

Not only do the characters' current conflicts give us insight into their lives, but their carefully crafted backstories help us understand how they went from being civilians to incarcerated criminals. Often flashbacks reveal the inmates' personalities, showing us a different side to them than we see in Litchfield.

Ever wonder why you relate with these fictionalized prisoners? I might be going out on a limb here, but there's a chance your astrological sign has something to do with it. I combed the internet to find the key traits of each astrological sign and matched them with an OITNB inmate. (Very scientific stuff here.)

Are you most like Piper? What about the "Bettie Page of Litchfield," Alex? Check out the guide below to find which Orange Is the New Black inmate is your favorite based on your zodiac sign. (Warning: There are def Season 3 spoilers below!)

Your fave is Red. Aquarius go about achieving goals in unconventional ways, just like Red's glorious return to the kitchen. They also value honest and loyalty, two things that Piper learned, rather unpleasantly, are important to Red as well.

Your fave is Poussey. Pisces are highly intelligent, although they are quiet and prefer to keep a low profile. Unfortunately, they can be gullible, as we saw in Poussey's Season 2 plotline with Vee.

Piper is your fave! Like our protagonist, you're creative, strong-willed and can be an over-achiever. Pipes is know for her scrappiness, especially in her recent underwear scheme.

Your fave is Alex. Strong and stubborn, Tauruses also happen to be good at business. Hopefully, unlike Alex, your business will keep you outta the slammer.

Stella is your fave! Gemini is represented by the Twins, so there's a duality to your personality. Likewise, Stella showed two very different sides to her personality, much to Piper's dismay.

Your fave is Morello. Like Lorna, Cancers love domestic life, tradition and families. As we've seen in the second and third seasons, Morello craves the stability that comes from a relationship.

Your fave is Pennsatucky. Like the inmate, you're a natural-born leader. Of course, this also means you're headstrong and brave, which totally sums up Pennsatucky.

Sophia is your favorite. Libras thrive on balance and stability. Sophia is usually a voice of reason, and a source of calm in the calamity of prison, making her a perfect fit.

Big Boo is your fave. Scorpios are bold, though often misunderstood. They're challenged by opposition, but possess a cool confidence. This totally makes sense, given the trajectory of Boo and Pennsatucky's relationship in Season 3.

Your fave is Nicky. One defining Sagittarius trait is the ability to comeback against all odds. (Here's hoping Nicky breaks out of max in Season 4!) Like her, you're also very focused and intense.

Daya is your fave! Capricorns seek order and stability, much like Daya does after she learns she's pregnant. They rarely share their problems, instead, choosing to shoulder them alone. Of course, your astrological sign might not match your favorite inmate, and these personality traits might not specifically apply to you, but that's part of the fun of astrology and Orange Is The New Black. Our opinions grow and change as the characters develop, and our star-born faves might become our starcrossed faves instead.