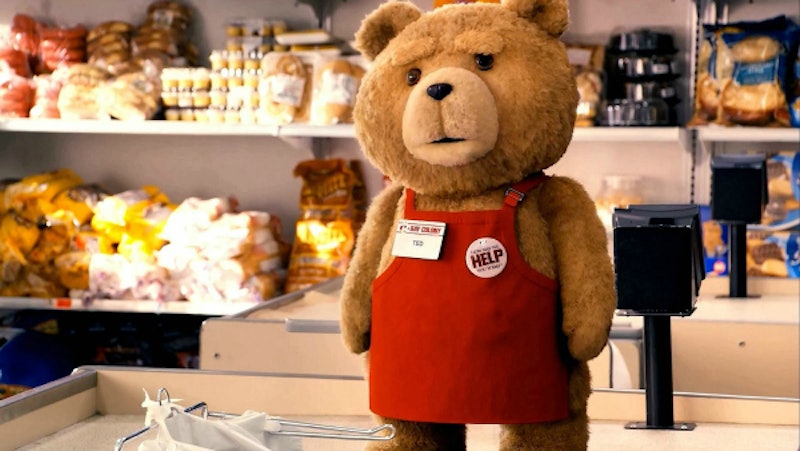 Whatever your feelings about Seth MacFarlane may be, you gotta admit, the guy knows his pop culture. Whether it's the celebrities he gleefully tears apart during episodes of Family Guy or all the jokes he made at actors' expenses that time he hosted the Academy Awards, the comedian has shown that when it comes to Hollywood, he's the guy with all the information (and all the punchlines). So it's no surprise that his new movie, Ted 2 , is filled with pop culture references galore, with no movie, celebrity, or scandal safe from the one-liners spewing out of the mouths of John (Mark Wahlberg) and his bear BFF (MacFarlane).

From famous actors agreeing to play parodied versions of themselves to classic movie scores being used for the comedy's biggest scenes, practically every moment of Ted 2 is filled with tons of pitch-perfect pop culture references. Some are simple laughs, meant to to be self-aware and self-depreciating; others, meanwhile, are meant to cause serious howls, gasps, and shocked whispers of, "did they really do that?" Check out the 18 biggest references below, and admire — or be terrified of — just how crazy MacFarlane's sense of humor really is:

There are many celebrity cameos in Ted 2, but one of the best is Neeson's, because it involves the actor making fun of his public persona. During a scene at the supermarket Ted works at, a customer (Neeson) buys a box of cereal — but not before asking odd questions like "is this really just for kids?" and "is anyone following me home?" in a deep, growly voice. It sounds just like the actor's Taken character, and it's a great shout-out to the film.

A running joke in the movie is how big Amanda Seyfried's eyes are, and at one point, Ted and John say she looks like Gollum, the big-eyed character from Lord of the Rings. It's a harsh comparison, but the actress takes it in stride.

During a major scene in the movie, Ted makes a joke at the Kardashians' expense involving their history of dating black men that will certainly elicit groans from audiences. It'd a bit too X-rated to repeat in full, but if you're a fan of the sisters, you probably won't be the biggest fan.

Another joke that some fans might not be so thrilled about? Ted, comparing his fight to be recognized as human to the plight of the slaves depicted in an episode of Roots.

Fans of the first Ted will remember that Sam Jones, aka Flash Gordon, had a significant role. In the second movie, he's back and better than ever, with an even bigger part to play.

6. The Breakfast Club Scene In The Library

There's a great scene in the movie where Ted, John, and Sam (Seyfried) are studying up on their case, and they unintentionally reenact a famous scene from The Breakfast Club. A perfect homage.

7. When John Thinks That Judy Blume Wrote The Great Gatsby

I mean, it's a solid guess.

A large portion of the movie's last section takes place at New York Comic-Con, and fans of the convention will be thrilled to see all the familiar nods.

When John, Ted, and Sam stumble upon a marijuana farm, the classic score from Jurassic Park begins playing. It is epic.

Ted and John have a ton of fun making up lyrics to Law & Order's opening credits in one memorable scene.

Tom Brady is in on the joke when John compliment his, um, footballs.

And the one to Germanwings, and Charlie Hebdo... Ted 2 has no problems crossing that line during a scene at an improv club, where John and Ted shout inappropriate things to the innocent comedians asking for suggestions for "places" and "people."

Donnie (Giovanni Ribisi) needs to find Ted, but he's hidden in a shelf full of lookalikes. So he gets the genius idea to play "Sweet Caroline," as he knows no Boston native can resist the Neil Diamond classic.

Later, Ted returns the favor by playing this song, to which Donnie is forced to dance.

Seyfried plays Sam L. Jackson, which would be funny if she'd ever heard of Samuel L. Jackson. "Have you seen any movie, ever?" John asks her.

Jimmy Kimmel makes a quick cameo discussing Ted's trial, but the real late night reference is a fake SNL skit, in which cast members like Kate McKinnon and Taran Killam re-enact the case.

Shortly into the movie, the credits roll, but they're not your average ones — the feature Ted doing an elaborate dance number that'll be familiar to fans of movies by Fred Astaire and the like.

Because when someone introduces himself as Dr. Danzer, it's only natural that you start singing "Tiny Dancer" to his face.

It's safe to say that Ted 2 doesn't hold back on the pop culture digs. And for the celebrities and movie studios that managed to make it out of the movie alive? Don't be so relieved: there's still the possibility of a third Ted movie, and you know that MacFarlane is aching to take you all down in the funniest ways possible.