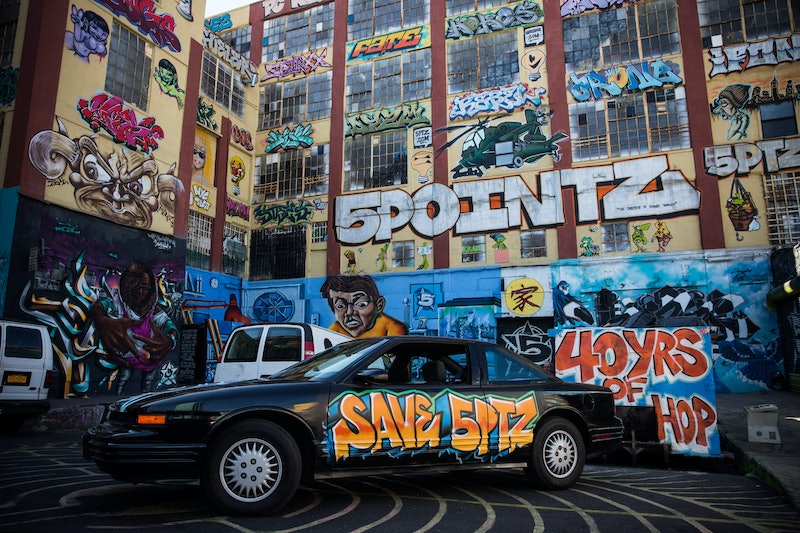 When we found out that New York City's legendary graffiti spot 5Pointz was painted white overnight this week, Bustle — along with the entire Internet — was bummed. Why did Jerry Wolkoff, the man responsible for the decision, do it? Wolkoff says he wanted to "avoid having the artists see their work being bulldozed piece by piece, and to avoid potential altercations mid-smashing." Now, there's no stopping the December demolition of the building, which will make way for new high-rises. After all, the petition for 5Pointz to receive landmark status will no longer succeed: if there is no art, there is no landmark.

To mourn the loss of the internationally renowned art space, graffiti artists and supporters alike held a candle vigil Tuesday night. Gone are the memories of Phun Phactory, as 5Pointz was formerly known. No longer will graffiti artists from across the U.S. and around the world come to the site to express their creativity using spray paint.

5Pointz may be gone, but graffiti art in the United States is very much alive. While Banksy may have enthralled us for the past few months, the United States has a vibrant homegrown graffiti movement that is alive and well. The graffiti art scene is more diverse than ever before, with female artists becoming even more visible.

Here are 5 U.S.-based graffiti artists you should knw about:

The Ecuadorian-born, NYC-bred Lady Pink began her career as a graffiti artist in 1979 by spray-painting subways. Her graffiti murals in 1990s, however, are what turned her into a legend.

The above mural by Lady Pink, Lady Liberty is Bush's Whore, was painted at 5Pointz.

Lady Pink was also one of the first female graffiti artists. Here's what she had to say in her artist statement for the Brooklyn Museum:

When you have guys that disrespect you you're gonna have to teach them a lesson, otherwise they are going to keep walking all over you. I'm sorry, but that's the way it is out there, it's not easy. But it also reflects what the art world in general is: 80% white males. So you have to fight tooth and nail, bitch and scream, be loud and be large to get respect.

In recent years, Lady Pink's had exhibits at Woodward Gallery, and just last month, she had a live graffiti art demonstration with Chris "Daze" Ellis on the Museum of the City of New York's terrace.

Check out this preview of the movie Bomb It! which features Lady Pink as well as other graffiti art legends.

Also known as Caledonia Dance Curry, Swoon is not only a spray-painting graffiti artist: cut-out graffiti is also her specialty.

Swoon typically makes her cutouts from recycled newsprint paper, and uses wheat paste as an adhesive. Her cutouts can be found anywhere from water towers to the walls of abandoned buildings.

The person who inspired her name was none other than her ex-boyfriend, who apparently dreamt she was spray-painting the name "Swoon" on her art with him. Swoon dropped the guy, but kept the name.

Another one of Swoon's greatest legacies is her 2011 musical installation for New Orleans, in which she created a small wooden town that also served as a series of sound sculptures.

Since 1984, Jonathan Avildsen — known as JA, sometimes JAone— has literally left his mark in Los Angeles and New York City.

Yup, that's it. Two simple letters: JA. Or, sometimes, JAone, or JA XTC. If you look for it, you can find his tag everywhere — from subway walls to trucks. We're guessing ego isn't an issue here, but JA must know he's made it, because he was even featured in Rolling Stone.

Here's a surprise: JA is also an actor, and his film career includes parts in The Karate Kid, Part III and Rocky V. JA's no museum's chump, but you'll still find people on Tumblr or on Twitter who'll take a snapshot of his tag and use the hashtag (get it?) #JA.

His process is a unique one. Judith creates his collage first, and once he's done, he blows them up and reprints them in greyscale. After that, he adds outrageous colors — often using the same color scheme of hot pink and sickly green-yellow.

Through his collages, Judith takes a stab at class consciousness and sexuality, often superimposing children's' heads onto naked adult bodies.

In September, Judith and Arrested Development actress Alia Shawkat announced that they would be partnering up for an exhibition. You can take a look at the results here.

"NYC Graffiti Artists For Hire" is the slogan you'll see on Tats Cru's website. Today, Tats Cru has no qualms about bragging about the crew of mural kings it comprises (though once, the group was a little bit more illicit, and known to tag subway cars).

These days, the graffiti group has done work for Nicki Minaj, Metallica, Missy Elliott, and Nas.

The current members of Tats Cru are Wilfredo "Bio" Feliciano, NICER, BG 183, HOW and NOSM, and Mister Totem. Watch them do their thing below.