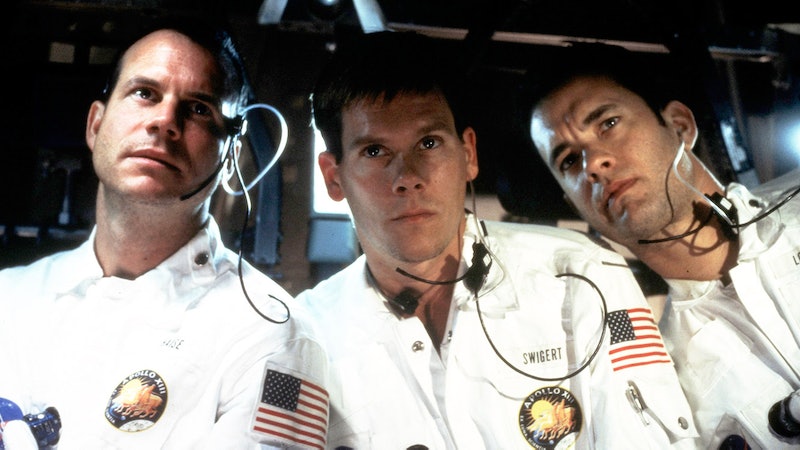 It's been 20 years since Tom Hanks, Kevin Bacon, and Bill paxton averted lunar disaster in Apollo 13. Ron Howard's modern classic tells the true story of a failed mission to the moon by NASA in 1970. A disastrous eruption in one of the ship's oxygen tanks caused the vessel to lose oxygen at a rapid and nearly deadly rate. The mission was manned by Jim Lovell (Hanks), Fred Haise (Paxton), and Jack Swigert (Bacon). The film tells the real life saga of how the astronauts and the NASA workers in Houston were able to avoid tragedy and bring the crew safely home. On the 20th anniversary of Apollo 13 , we can appreciate how big of a critical success the film was and just how groundbreaking its special effects and technology were for 1995.

Apollo 13 still holds up. Its director Ron Howard is a master storyteller and Tom Hanks has an unmatchable ability to make audiences care about a character and a film. It's no surprise that the Apollo 13 was listed as the number 12 most inspiring film of all time by the American Film Institute — it has everything a near-perfect dramatic film could have. Along with its historical significance and non-stop intensity, Apollo 13 is a resounding story about the triumph of the human spirit. Here are a few things you may not know about this incredible film.

1. The Film Was Partially Shot In Zero Gravity

Howard had the cast prepare for their roles by training in NASA's zero gravity jet, which is also lovingly called "The Vomit Comet." Howard was so taken by the experience that he got permission from NASA to build a set inside of an actual kc-135.

2. Howard Could Only Shoot The Weightless Scenes For 25 Seconds At A Time

In order to achieve zero gravity, the plane reaches 36,000 feet and then dips sharply downwards. The action generates enough centrifugal force to beat gravity for about 25 seconds. Once that ended, everything inside the vessel (including the actors and crew) was flung back to the ground and held there with intense force. Needless to say, even with NASA-strength motion sickness medications, everyone got sick.

3. Historically, the Line Isn't, "Houston, We Have a Problem"

4. Buzz Aldrin Is A Huge Fan Of The Movie

According to an interview with the Philadelphia Inquirer, after seeing a special early screening of the film, Aldrin, the second man to walk on the moon, walked up to Executive Producer Todd Hallowell and said: "You guys really got it right. You really nailed it."

5. The Film Actually Didn't Win The Oscar For Best Picture

It lost to Braveheart.

6. Tom Hanks Has An Asteroid Named After Him

7. The Real Marilyn Lovell Really Did Drop Her Ring Down A Drain

Critics thought filmmakers put it in the movie for dramatic effect, but Jim Lovell testifies that it's all true. Thankfully, she got it back. Tragedy averted!

8. The Apollo 13 Crew & NASA Team Were More Prepared Than The Movie Lets On

For this scene in particular, Ken Mattingly (Gary Sinese) commented in an interview with NASA, "Movies and everything makes it look like we invented a lot of stuff. Well, thanks to the kind of simulation training program we had, maybe the things weren’t exactly the same or in an exactly the same order, but everything we ended up doing had been done somewhere."

He would turn the temperature down in the studio during some filming segments so the actors could understand what the astronauts felt while on the dark side of the moon.

10. The Real Gene Krantz Used A Line From The Movie For The Title Of His Autobiography

Though he didn't say, "Failure is not an option," in 1970, the iconic line did become a part of his life later on.

11. Brad Pitt Turned Down The Film

He did it so he could star in Se7en. John Travolta and John Cusack also declined their offered roles.

12. Ron Howard Used A Real NASA Crawler In The Film

That would be the huge transporter that carries the ships to lift-off. NASA also didn't charge a rental fee. They only asked that the studio pay for fuel and labor.

13. Jim Lovell Appeared in the Film as an Extra

Hanks even had the honor of shaking his hand for the scene. Marilyn Lovell and Gene Krantz also made cameos in the movie.

More like this
Keke Palmer Hopes 'Lightyear' Will Help “Normalise” Same-Sex Relationships
By Sam Ramsden
Everything To Know About 'My Big Fat Greek Wedding 3'
By Grace Wehniainen
Alicia Silverstone Has Recreated An Iconic 'Clueless' Scene
By Frances Stewart
Emma Thompson, Lashana Lynch, & Stephen Graham Lead Netflix’s 'Matilda'
By Sophie McEvoy
Get Even More From Bustle — Sign Up For The Newsletter