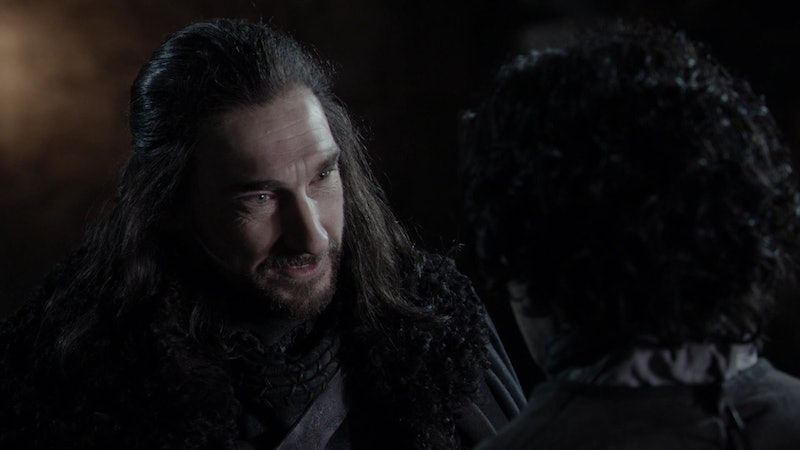 There are a lot of characters who seem to have quietly vanished from Game of Thrones without meeting a deadly fate. Arya's direwolf Nymeria is presumably running around the woods of Westeros just fine, Catelyn's brother Edmure Tully is off on his honeymoon still, and every time a scene takes place on water I keep an eye out for Gendry who is still rowin'. However, one character has been missing since Season 1 — whatever happened to Benjen Stark on Game of Thrones ?

That question may put a bad taste in your mouth after the Season 5 finale. The little punk Olly used his disappearance as a way to lure Jon Snow to his stabbing. If you recall, Benjen is Ned Stark's younger brother and a former ranger of the Night's Watch. He vanished while out searching for another ranger who went missing in the Haunted Forest — suspicious. Besides being a cool dude and good uncle to Jon Snow, he might also know the bastard's true parentage. Since this secret can't be known by too many people in the Game of Thrones universe, fans speculate that Benjen Stark has got to be alive... somewhere.

So what happened to him? Here is a round up of some fan theories and other possibilities about Uncle Benjen's whereabouts. Warning — I'm blasting the horn now because there are many book spoilers ahead.

He's Still Out There

Benjen Stark's horse returned to the wall without him, and on the show we later saw his companions as wights. For all we know Benjen is still out there, fighting the White Walkers, teaming up with Wildlings, and/or solving mysteries. He could be just fine. This is my roommate's belief, at least. She also ships Osha and Hodor, so take that with as much salt as you need.

This is a character who we have not yet seen in the HBO series. Coldhands is something of a sentient wight, not quite a White Walker, who chill hangs (get it) with Bran, Hodor, and the Reeds while they are exploring beyond the wall and meeting the Children of the Forest. It was the most popular fan theory for a long time.

However, recently George R. R. Martin debunked this Benjen Stark theory in an uncovered manuscript with notes from his editor. The handwritten notes asked if this character was Benjen, and G.R.R.M responded with a resounding "NO."

Wouldn't that be something? That would definitely explain why the Night's King was so interested in Jon Snow. This also serves a grander theory that the Starks and the White Walkers share a connection (why must there always be a Stark in Winterfell, you wonder).

Wait, what? This is actually one of the more popular fan theories about Benjen Stark, that he abandoned his Night's Watch post to go find Daenerys Targaryen. I know what you're thinking. They're played by different actors. This theory makes more sense in the books, where Daario appears with heavily dyed hair that could disguise any identity. The Starks are far too Noble to desert like that — he would have to have been sent by someone like Varys. There's also a theory that Daario is Euron Greyjoy, but I think the Benjen theory is more likely.

I guess we'll have a chance to find out next season on Game of Thrones, now that Daario has teamed up with Jorah Mormont to find Daenerys and Drogon. After all, House Mormont is of the North and, as we were reminded by Stannis early on in Season 5, remains loyal to House Stark. If anyone in Essos were to recognize Benjen in disguise, it's him.

However, I have to say — if this theory turns out to be true, it's either frustrating that the HBO series recast Daario halfway through the series, or brilliant. Also, if this theory is true and "R+L=J" is true... then I find it kind of funny that Daenerys traveled all that way just to somehow fall back into the arms of her own extended family.

...and so is Jon Snow and nothing matters. I'm kidding! Well, partly. I'm sure it's no coincidence that his name bares a resemblance to Uncle Ben from the Spider-Man comics and stories. His death and his character could still have meaning in the series, but it is possible that Benjen Stark is just another person to tell Jon Snow "we'll talk when I get back" and ride off to his doom.