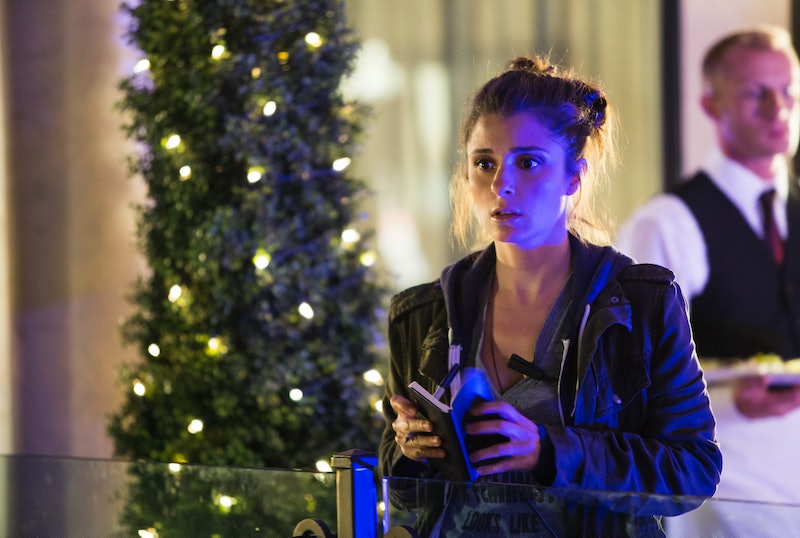 I have a confession to make: I am totally and completely hooked on Lifetime's new series UnREAL. It came as a surprise to me simply because I've never really gotten into a Lifetime scripted show before (though I've caught a few of the network's movies) and I was a little skeptical of the subject. I mean, I only watched one season of The Bachelorette, so a drama on Lifetime about the makings of a Bachelor-like show did not sound like my thing until I happened across the pilot — and you guys, it is good. I mean, crazy good. Marathon-worthy good. Pester all of your friends to watch so you have someone to talk about it with good. There are so many reasons this show is must-see summer TV. It's got a fun plot we can all relate to even if we're not fans of reality dating shows (everyone has at least seen the promos, they're hard to escape), coupled with fast, witty dialogue that never talks down to the audience.

All good things, but hands down the best part of this show is that it stars Shiri Appleby (who I will always love from her Roswell days) as Rachel Goldberg, a producer recovering from a very public meltdown. She lies, manipulates, and is rarely shown worrying or caring at all about her appearance. She's unlike most female leads out there, and thank goodness, because I believe Rachel Goldberg is the female antihero for the ages.

I know that sounds like a pretty bold statement, but there's no avoiding the truth. Though Rachel is the hero of the show (it follows her story, romance, and trials very closely), she's not a terribly likable person. By the end of the first episode, we watch her use one dating contestant's history of foster care and time spent in a psychiatric facility to get her to have a drunken meltdown on TV. Later, we see her paint another contestant whose father just died as an unstable psychopath. She's incredibly good at manipulating people, and uses that to her advantage to get the best sound bites possible. All in the name of good TV.

Emotionally, Rachel is a bit of a mess (barely coming back from an on-air freak out) and physically, the always adorable Appleby has never looked less glamorous. She slouches, slumps, and bites her nails through every scene — and very rarely showers. It's a complex role unconcerned with appearance, which is a character description usually saved for male leads.

Think about all of the antiheros that have become so promient on television these days: Walter White (Breaking Bad), Tony Soprano (The Sopranos), Francis Underwood (House of Cards), Don Draper (Mad Men), and Hank Moody (Californication). All of the big names are men. Sure, there are a few ladies kicking butt in that unlikable/likable way — Nurse Jackie and Sons of Anarchy's Gemma Teller are probably two of the biggest in the last decade or so — but for the most part, the men are the flawed ones. The women are either the Lady Macbeth, urging them on into greater misdeeds, or the nagging shrew trying to stop them from their "fun." While there has been a lot of amazing progress on television in how women are portrayed, there is still a definite need for female characters to constantly be sexy and likable.

That's what makes Rachel such a breath of fresh air. She's not obsessed with a man (though she has love interests) and she's not a workaholic (though she is very invested in her work). She does awful things for terrible reasons and I am still rooting for her, the way I rooted for Walter White to escape the consequences of his actions. UnREAL has created a very real feminist antihero, and I can't wait to see what horrible thing she does next.