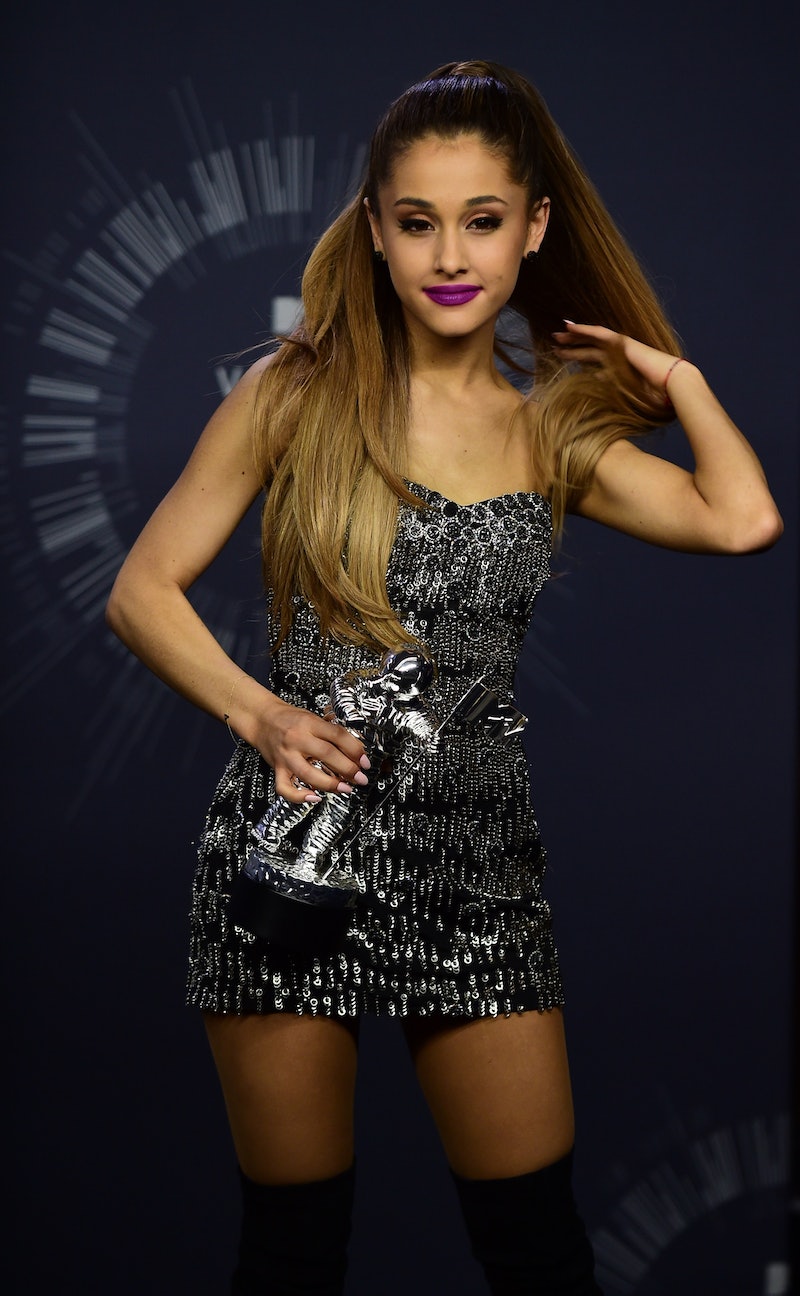 OMG, you guys! Half-up, half-down hair queen Ariana Grande got bangs and posted the photos on her largely black-and-white filtered Instagram. But relax, Arianators, relax. It's just a wig. The petite and ponytail-loving pop powerhouse was wigging out, experimenting with a bunch of looks, including bangs, temporarily so.

She may have been playing, but I for one would be totally pro her going for bangs for real. Grande's crop of brown hair is her style signature and she is often criticized for rocking the same ponytail over and over. So when Ariana Grande does something different with her hair, like wear it all down or mess around with wigs, the Arianators are quick to notice and respond.

Grande is naturally stunning enough that she could shave her head and still look amazeballs. But when she donned one wig that had bangs with shag, she sorta reminded me of a famous vintage TV housewife and supermom of six kids in a blended family. That hint should be big enough, but you'll recognize when you see it.

She was a little dirty in this pic, from being on set. But even that's cute.

Bangs! And the Carol Brady from The Brady Bunch flip. You know that's exactly what this coif looks like. Even Grande noted that it's a bit of a shock to see her with bangs, via her "What if?" caption.

In case you are not instantly familiar, there's the "real" Carol Brady flip up. Granted, it's Shelley Long playing Carol Brady and copying sitcom star Florence Henderson's flip in the film version, but it's the same 'do.

More Ariana Grande with bangs and a chic, head-hugging bob! She called them the worst wigs ever, but I think it's a cute, almost French girl look for her.

It worked for Selena Gomez in the "Bad Blood" video. Grande should try it. She might like the end result. It'd be a huge change, since she has so much hair and extensions, but I am fully on Team Fringe.

More like this
Ariana Grande Just Wore The Chunkiest Knit Sweater I've Ever Seen
By Dominique Norman
Pamela Anderson's Most Iconic Makeup & Hairstyle Moments
By Olivia Rose Rushing
9 Valentine's Day Hairstyles For 2023 That Look So Dreamy
By Audrey Noble
Blake Lively Debuts Red Hair For The 'It Ends With Us' Film Adaptation
By Olivia Rose Rushing
Get Even More From Bustle — Sign Up For The Newsletter
From hair trends to relationship advice, our daily newsletter has everything you need to sound like a person who’s on TikTok, even if you aren’t.