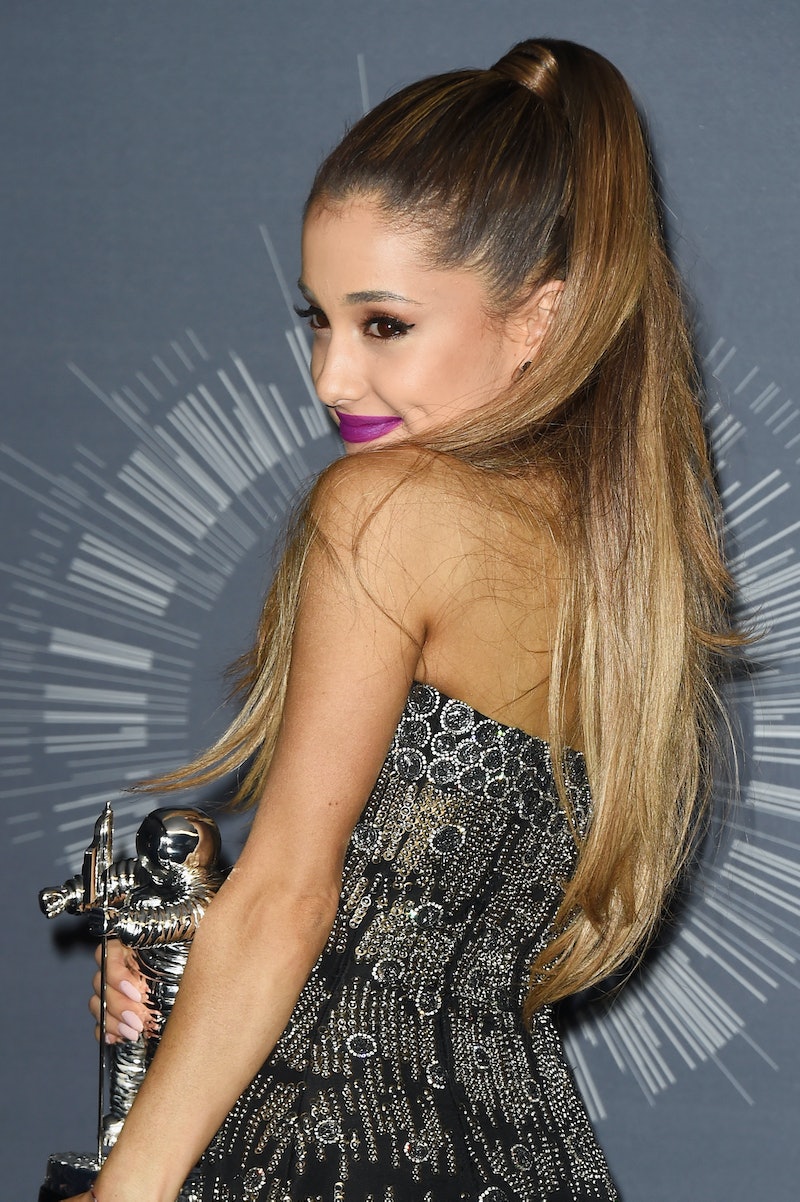 Sunday night at the MTV Video Music Awards, Ariana Grande was all over the place: walking the red carpet in a sassy leather ensemble, performing her hit "Bang Bang" with Jessie J and Nicki Minaj (despite a minor wardrobe malfunction), and just being generally adorable by bringing her grandmother as her date. And through all this, as per usual, Ariana Grande's hair was flawless, in that one half-up high ponytail style she's rocking perpetually.

But wait! Before you go calling Grande a one hair-hit wonder, let me do away with that popular misconception. Yes, clearly, this pony 'do is the "Break Free" singer's favorite. But sometimes she does other stuff! Like wears it in a full ponytail! Or down for approximately .2 seconds for an Instagram! In January of this year, Ariana Grande had a hair breakthrough, posting a photo with the caption "ciao ponytail, it's been real... new year new music new projects new chapters new weave," followed immediately by a rare selfie with her hair down...which she deleted by the morning. Since then, there have been a few times she's experimented with other looks — here they are, in no order whatsoever.

Thanks, Apple, for letting me screenshot on my phone so I could have this forever.

2. At The Jingle Ball

"I never wear my hair like this & when I do it doesn't last long. don't get used to it..," she captioned the pretty black-and-white photo.

4. At The Jingle Ball Again

It's kinda different! You know, because two ponytails instead of one.

5. When She Was Blonde

6. When She Did Full Pony Plus Headband

The same, but different.

7. When She Did Full Pony Plus Mouse Ears

8. When She Added Braids

9. When She Was On Cosmo

10. When She Tried To Make A Scary Movie

Getting into character, I suppose.

11. At The Kid's Choice Awards

And looking lovely in yellow.

12. When She Was On Teen Vogue

13. When She Did The Miley-With-A-Twist

Oh, right, this half-up do is a relatively new trend for Grande. While on Victorious, she had red hair that she wore in all kinds of different styles, which is probably how she came to land on the one she loves the most.

More like this
Ariana Grande Just Wore The Chunkiest Knit Sweater I've Ever Seen
By Dominique Norman
The Best Beauty Looks Spotted At Paris Couture Week 2023
By Audrey Noble
15 Modernized '60s Makeup Looks & Hairstyles That Feel Wonderfully Retro
By Olivia Rose Rushing
Hailey Bieber's New Bob Is Short Haircut Goals
By Olivia Rose Rushing
Get Even More From Bustle — Sign Up For The Newsletter
From hair trends to relationship advice, our daily newsletter has everything you need to sound like a person who’s on TikTok, even if you aren’t.