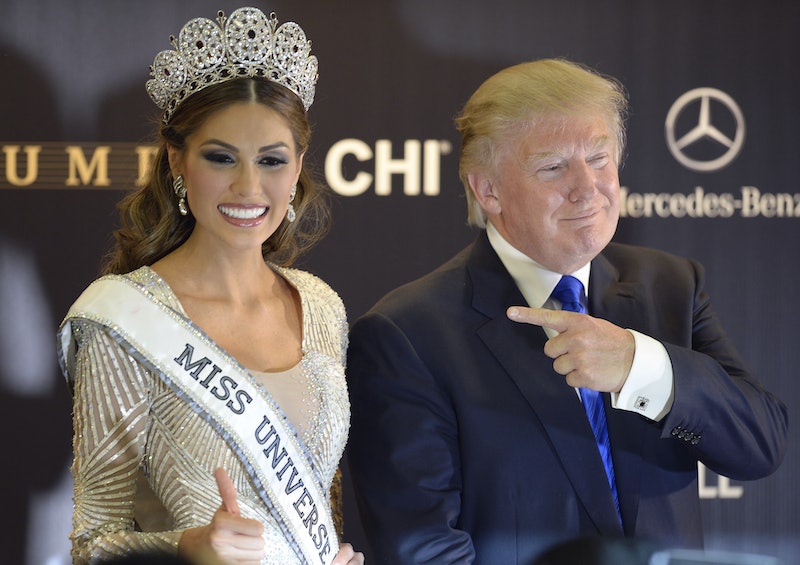 Clearly, no amount of sashes with Miss [insert state name here] emblazoned on them can keep an organization from doing what it thinks is right. On Thursday, Univision announced that they will not broadcast Miss Universe pageant, ceasing the network's partnership with the long-running pageant after the competition's part-owner Donald Trump made racist remarks about Mexican and Latin American immigrants. “Today, the entertainment division of Univision Communications Inc. announced that it is ending the Company’s business relationship with the Miss Universe Organization, which is part-owned by Donald J. Trump, based on his recent, insulting remarks about Mexican immigrants,” read the network's press release. “At Univision, we see first-hand the work ethic, love for family, strong religious values and the important role Mexican immigrants and Mexican-Americans have had and will continue to have in building the future of our country. We will not be airing the Miss USA pageant on July 12th or working on any other projects tied to the Trump Organization.”

UPDATE: It was reported by Politico that Trump will be attempting to sue Univision for breach of contract and defamation, for their use his quotes. Trump states that Univision is defaulting on an "iron-clad" $13.5 million contract, and goes as far to suggest that the reason Univision is cutting off ties is because of pressure "put on them by various sources in Mexico." We reached out to Trump's lawyer for comment.

Trump launched his presidential campaign earlier this month, and used his speech as an opportunity to spout racist rhetoric about Mexicans and other immigrants. In his announcement, Trump said that immigrants are "rapists," "bringing drugs" and "bringing crime" into the United States. He proposed building "a Great Wall" on the US-Mexico border, which he would demand that Mexico pays for.

Refusing to stay in business with Trump is a big move for Univision, showing Trump that there are actual consequences to prejudiced commentary and it will hit him where it hurts — his wallet.

Hopefully throughout this campaign season, Trump will learn to respect his fellow Americans and American immigrants. Until then, we can acknowledge that Univision made a very strong move. Here's hoping more media organizations will learn from this and see that standing up for their beliefs, instead of focusing only on ratings, can go a long way.