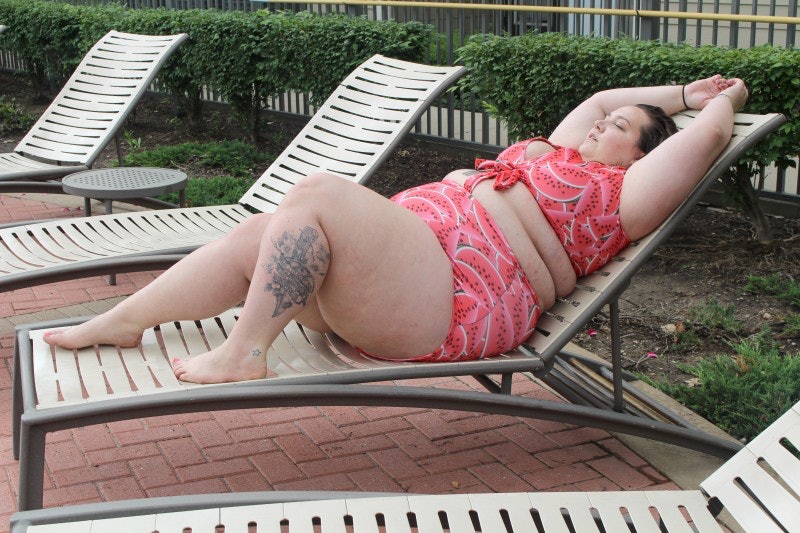 By choice, I see beautiful plus size women in bikinis probably every single day. I choose to surround myself with these images as an active member of the plus size fashion and body positive communities. These images inspire me. They help remind me that other women who look like me exist and are thriving. But when it comes to images of fat bodies in the mainstream media, it's a different story. The plus size woman we most often see selling us our bikinis is a size 12 white beauty with a very proportional hourglass body.

I sometimes find myself questioning whether or not a bikini is actually available in the size 22/24 that I need it in, because the model looks so different from me. I just don't see myself in these women. I don't identify with them. And I'm not the only one who feels underrepresented in the mainstream image of a plus size women.

Corissa, who only uses her first name for the purposes of blogging, has been posting casually on Tumblr for about five years, but recently started her body positive fashion blog on Wordpress. Fat Girl Flow quickly gained recognition in the body positive community when Corissa wrote a post about where to shop for clothing sizes 28 and up.

Corissa tells me in an interview via e-mail that the post took her more than two weeks to put together because of the lack of options, but in the end, the feedback she received showed just how necessary the article was.

"There were women who told me that they hadn't owned a pair of jeans in over 10 years and were going to purchase their first pair because of the post," she tells me. "But more importantly, people were emailing me and saying, 'Hey, thanks for thinking of me. It was awesome to see a post about plus size clothes that actually applied to me,' and that was amazing. Along with that, several people on the smaller end of plus size told me that the post helped them remember that there are people in the community who cannot shop most plus size lines, and that we need to make sure we include them in our body positivity."

Corissa's post on clothing for sizes 28+ highlighted the need for more diverse representation in the plus size community. And while she, too, admits to loving posts celebrating plus size women in bikinis, she wanted more.

"There is definitely a trend toward a very specific kind of plus size body that is represented," she tells me. "It's not easy to unlearn the behaviors and judgements that society has taught us, and frequently we fall into the trap of just stepping only slightly out of our comfort zone. People say things like, 'It's OK to be fat as long as you're healthy,' or 'Oh but they carry their weight so well they don't even look fat,' but body/fat positivity isn't just for people who vary slightly from the societal ideal. It's not just for fatties who are deemed 'acceptable' by the rest of the world. It's for everyone. Every body. And I think we need to make as much space as possible for as many different kinds of people as possible."

So Corissa put out a call on social media, asking specifically for women who feel underrepresented in the plus size community to submit their swimwear photos to her via e-mail. But finding women who were willing to submit was more difficult than she expected.

On top of submissions, Corissa reached out to a few women who had inspired her own self love journey and asked them to participate. She allowed women to submit selfies and camera phone pics, and as long as the photos weren't too blurry, she included them.

The results feature photos of 22 fat babes (including yours truly) and Corissa herself in all of our fatkini glory (and yes, I use that word with intention). In a society that would prefer fat women remain invisible, this post is a very purposeful way of saying that we won't disappear.

As a 5'1" size 3X woman, my body is just barely in the "acceptable" fat range, at least within the plus size community, and based on the comments I receive daily on social media, I know my body is still very far from "acceptable" in mainstream society. Someone said to me recently, "There's nothing worse than a fat girl with confidence." Aside from all of the eye rolls I did when reading those words, that comment portrayed something important to me that I always need to be reminded of when I am in my body positive community bubble: The existence and visibility of fat women who refuse to apologize for being fat still makes some people uncomfortable. And to combat this mindset, we need more visibility for all kinds of fat bodies in order to create a new narrative.

"When someone doesn't see their body depicted in images in the media or even in their social circle or family, it is very isolating," says Corissa. "Having exposure to bodies that look like your own helps to make people feel included and part of something. Anyone who has ever been through middle school probably knows what it feels like to not be included. Now imagine that feeling every single time you saw any form of media. Representation matters, not just for individuals, it matters for society as well. The more exposure to different bodies we can get into mainstream media, the more people will begin realizing that fat people are not invisible. You cannot look past us. You cannot ignore us. We are here, and we deserve love and respect."

Corissa says she hopes that this post can help spark the conversation about why we need more diverse representation and more importantly, what we can do to get it.