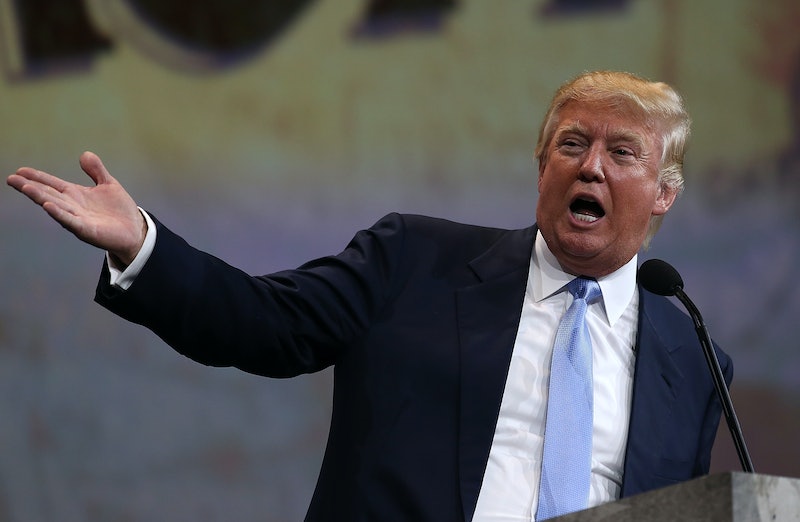 If there's one thing you can say for sure about Donald Trump, it's that the Donald says what he thinks. The billionaire is known for making odd, egotistical, and often inflammatory statements — and especially known for picking public fights with major players in politics and business. That might have worked for him as a business tycoon, but it can have serious consequences for a potential President of the United States. Trump got that lesson firsthand on Thursday, when broadcasting giant Univision ended its partnership with the Miss Universe organization, of which Trump is part owner.

The company’s president and CEO, Randy Falco, told CNN that he made the decision to break ties with Trump out of respect for the company’s Spanish-speaking employees and viewers. Univision is the largest Spanish-language media company in the United States. The media giant had just established a 5-year contract with Trump to broadcast the Miss USA and Miss Universe pageants in Spanish. The pageants, according to reports by the Los Angeles Times, are popular among the network’s viewers, 80 percent of whom are Hispanic. And with Univision out of the picture, competing broadcaster Telemundo would be next in line to take over Spanish-language broadcasting for both events. So why pull out of the deal?

In a written press statement, the company said that the decision was a result of Trump’s “recent, insulting remarks about Mexican immigrants.” The company felt forced to make an ethical decision between staying in a highly lucrative business partnership or respecting its employees and supporters—and the man who wants to be President of the United States forced them to make that choice.

At Univision, we see first-hand the work ethic, love for family, strong religious values and the important role Mexican immigrants and Mexican-Americans have had and will continue to have in building the future of our country. We will not be airing the Miss USA pageant on July 12th or working on any other projects tied to the Trump Organization.

In case you’ve forgotten Trump’s recent statements about Mexicans, let me refresh your memory. It began with this really ugly quote during his speech last week to announce his presidential bid:

The U.S. has become a dumping ground for everybody else's problems … When Mexico sends its people, they're not sending their best … They're sending people that have lots of problems, and they're bringing those problems with us. They're bringing drugs. They're bringing crime. They're rapists. And some, I assume, are good people.

A few days later, Trump went on Twitter to clear up any pretense that he held Mexico and Mexican-Americans in anything but the deepest contempt:

Univision's main news anchor Jose Ramos, recently named one of TIME Magazine's 100 Most Influential people, responded to Trump's insulting statements by calling out just how dependent the Trump empire is on Latino support with a blog. He noted:

It is hypocrisy to criticize Mexicans while, at the same time, you benefit from their work ... To Trump, who is so fond of setting challenges in his television show, The Apprentice, I propose the following: to spend one single day — just one — without their Mexican and Latino employees. He would not be able to do it. His businesses would be paralyzed. A day without Mexicans would stop the Trump empire.

If Trump thought that his biased statements were going to get him votes, he was wrong. It’s the other way around. He has already lost the Latino vote and, therefore, the White House. He’s fired.

Univision executives clearly agreed with Ramos. But that isn't changing anything in Trump's mind. On Thursday, following the announcement from Univision, he tweeted his own (slightly revisionist) reasoning behind the break.

Univision undoubtedly made the right choice here. The alternative, its silence, would have sent a message to the world that Trump’s brand of racism is acceptable—and that anything can be forgiven when you’re “really rich.” Instead, the company made the tough choice to take a financial hit and call the Republican candidate out on his bigotry.