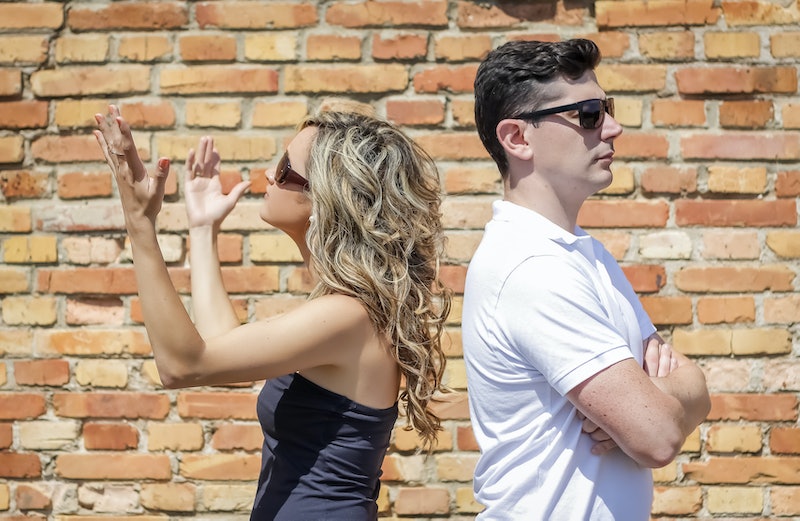 For the sake of maintaining sanity, we ALL need to take breaks, whether they're coffee breaks, spontaneous dance breaks, or Chipotle breaks. Sometimes, you even need to take a break from your relationship. As the adage goes, absence makes the heart grow fonder. And when you've spent so much time with your bae that you feel on the verge of affection overdose, absence can remind you why you liked him or her in the first place.

Don't get me wrong, being in love is great. It means that you basically have an all-time Netflix partner and sex friend all rolled into one neat little package. In spite of those unbeatable perks, being in a relationship is hard work. If you and your partner can barely have a conversation without it devolving into a shout-fest, you may want to give each other some breathing room.

Sure, "going on a break" is often interpreted as the precursor to breaking up. If done right, however, taking a relationship breather can be healthy and productive. It gives you an opportunity to step back and take stock of what you and your partner truly want. As an added bonus, you'll get to spend some time just doing you.

Could you and your boo use some time apart? That's where we come in. We've partnered with FYI's Seven-Year Switch and chatted with some experts to help you take stock of your long-term relationship. If you recognize any of the following signs in your own relationship, you may want to consider taking a break.

In the honeymoon stages, your babe's habit of smacking her lips after she took a sip of anything was endearing. Now, every time she does it, you kind of want to gag. The longer you spend with someone, the more you get to know their flaws and foibles backwards and forwards. However, you don't want to get to the point where those flaws become the only things you see.

If you're that couple always having the same arguments

Ahh, the compulsively-fighting couple: every friend group has one. They exist for the express purpose of ruining dinner parties. However, being that couple isn't pleasant for anybody. "If you and your partner are continually exhausting yourselves with the same arguments ... it might be helpful to take a breather," says relationship writer Akirah Robinson. During your sabbatical, you can also spare your friends the public embarrassment of your mercurial chemistry. Everybody wins!

If boo has become a Bug-A-Boo

In the inimitable words of Destiny's Child, if your boyfriend makes you wanna throw your cell phone out the window, tell MCI to cut the phone poles ... he's probably a bug-a-boo. In plainer, non-early-aughts-pop language, if your significant other is smothering you, stepping back could be a good idea.

If you're not communicating at all

Good communication is the foundation of any relationship, but you've really gotta work on it. Sex therapist Vanessa Marin tells us, "You don't want to be with a partner who is unable to communicate." Even after years together, people can become less open with each other, or just develop an illusion that they can read each other's minds. Taking a break can give you an opportunity to candidly address those communication lapses and get you back on the same page.

If babe is lime-green Jell-O about your success

You and your partner should motivate each other to be the best versions of yourselves, and sometimes that involves a bit of lighthearted rivalry. However, if you feel that your dude or lady is genuinely jealous of your success, or you feel jealous of theirs, you may want to step back. In your time apart, you can evaluate why you're secretly rooting for them to fail.

If sexy-time has become virtually nonexistent

Years into a relationship, you and your person may no longer be hitting the sack like the proverbial jackrabbits, and that's TOTALLY normal. "Chemistry ebbs and flows over the course of a relationship," says Marin. However, if your formerly lush sex life has turned into a barren desert devoid of sexual desire, that could be a problem. Marin says, "If you've completely lost your desire for each other, it may be time to move on."

After years of being with someone, you sort of become compound person. However, in that glorious process of becoming a "we," you can often forget what the "me" was ever like. Breaking it off for a bit can give you an opportunity to get back in touch with yourself, and just do you.

More like this
Are Sagittarius & Sagittarius A Good Match? Astrologers Weigh In
By Kristine Fellizar
15 Ways To Deal With A Toxic Family During The Holidays
By Gabrielle Moss and Carolyn Steber
Are Sagittarius & Aquarius Compatible In A Relationship? Astrologers Weigh In
By Kristine Fellizar
Emily Ratajkowski & Pete Davidson's Astrological Compatibility, Revealed
By Nina Kahn
Get Even More From Bustle — Sign Up For The Newsletter