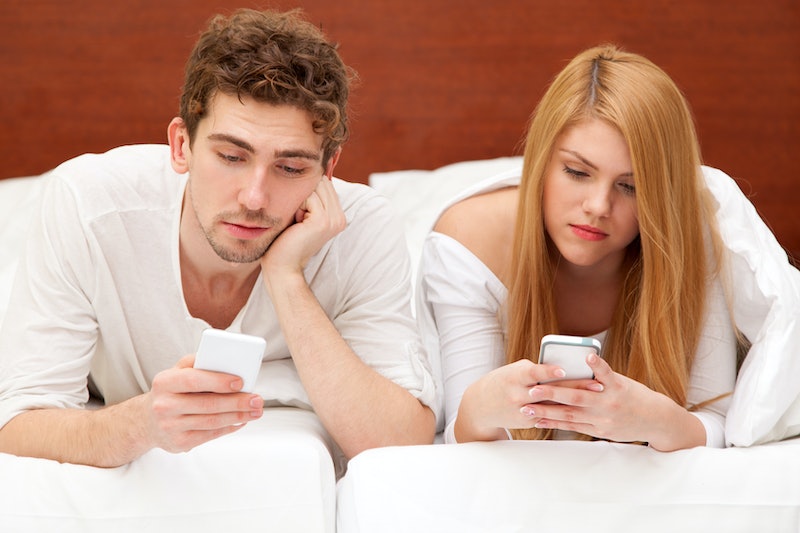 It’s safe to say that I know a thing or two about relationship ruts. I’m not proud of it or anything — it’s just a natural consequence of my idiotic penchant for years-long, miles-and-miles-spanning liaisons. (The phrase you’re looking for is “pretty, but not very bright.”) When you date someone for a long time, but also spend a lot of time apart from them, it’s easier than easy to forget what was so attractive about them to begin with. This can also happen to you if you’re a normal person who does not view life as a game with an end goal of utter and self-inflicted misery.

It can be hard to know if it’s worth pushing through choppy waters or if it’s best to just abandon ship. If you’re on the fence — or leaning over the bow, seriously contemplating a swan dive — take a minute to reflect. We’ve rounded up a list of signs that, while no guarantee, suggest that it might be worth hanging in there for for a little while longer.

1. You haven’t discussed the rut yet

DUDE. Come on. You don’t get to flip out about couples’ ennui without discussing it with your partner first. If you’re just bored, tell them that you want to spice things up a little. (That is a good way to phrase it, whether or not sex is the issue. What sane person would turn that offer down?) But if it goes deeper than boredom — anger, frustration, a sense of isolation — then you need to sit down and have a heart-to-heart. You know the rules of communication: lots of “I” sentences, no finger-pointing. And, because you’re not set on ending things yet, consider this conversation a solution-oriented brainstorm, rather than an opportunity to rant. That’s what friends, coworkers, and the poor woman who had the bad misfortune to buy a seat next to yours on a six-hour flight are for!

2. Your eye hasn’t started to wander (well, much)

Look, we all check out people who aren’t our significant others. People are pretty! It’s a fact. But there’s normal checking-out and normal flirting for free drinks (what? I work in publishing), and then there’s eye-fucking and relocating to a more intimate spot at the bar. If you still fall more in the former camp than the latter, you might be dissatisfied, but you’re also not necessarily looking for someone else to fill the void. There’s hope!

3. One of you or both of you experienced a major life event recently

This one’s a little tricky. Crazy changes happen, and in our general 20-something age group, they go down way too often. Sometimes, these changes bring couples closer; other times, they present exhausting but surmountable challenges; in the worst-case scenario, they permanently rewrite the nature of the relationship until it melts into something unbearable. Thing is, it’s impossible to know which right away.

So, here’s my rule of thumb, and I know not everyone will agree with me on this: I think that, unless this event is making one of you, like, cruel, it’s probably worth sticking around to see what you two look like when the dust settles. At the same time, it’s hard to put a timeline on someone else’s animorphing, so set limits for yourself. For example: “I think I can handle one month of this feeling. In one month, I will check back in with myself to see if I still feel strong and certain that this is the correct decision.” And yes, setting limits for yourself works better when you speak in a robot-voice.

4. You’re primarily mad because they’re not doing all the cute things they used to do

OK, here are a few of the things past boyfriends have done for me in the early stages of our relationships: made scrapbooks, wrote poems/mushy emails, gifted chocolates/flowers/jewelry/flavored vodka (what? I was underage), beheld me with awe and wonder. People. THESE THINGS DIE OUT ONE YEAR IN. Sometimes they die out sooner. And though it’s wonderful to be wooed, honestly, you would not want someone doing these things for you all the time. They’re a little creepy, compounded. That doesn’t mean that you can’t have any romance at all; you just need to spark it differently. Trying new things together is always a good one.

Also, I’ve been known to drop really obvious hints. Actually, they're not hints. Like, I will say, “Hey, boyfriend, I would really like for you to buy me flowers,” or “Can you write me a sexy email?” You would think it doesn’t feel as nice, because you had to ask, but it still feels pretty good. What? A girl needs flowers.

5. You genuinely want to make it work

Duh! Obviously, if you’re dating a bona fide Ted Bundy type, it’s worth second-guessing this feeling, and also, your decision-making in general. But if you’re still mostly in love — not just comfortable — and you can see yourself evolving with this person — instead of swimming in the nostalgia of what your relationship used to be — then it’s well worth the effort to propel your coupledom into a better place.