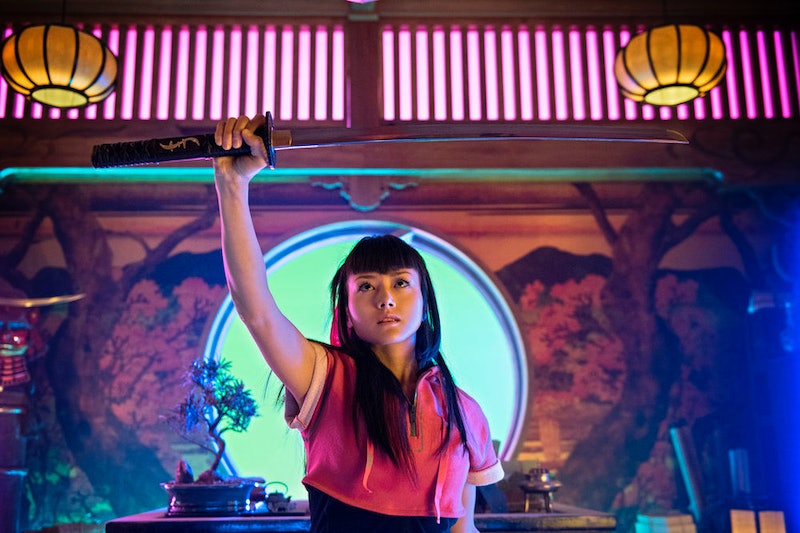 Just this Wednesday, NBC released a promo for their upcoming 13 episode miniseries Heroes Reborn that asked the question, "Where Are The Heroes?" Well, NBC revealed the answer only one day later with Heroes Reborn first real trailer, featuring viewers' first glimpse at actual footage from the reboot. The one minute promo is essentially the same teaser that was released earlier this week, complete with images of general destruction and a creepy choir of children singing Metallica's "Nothing Else Matters." Except this time, these images are interspersed with some dialogue and shots of characters — both new and returning — in action.

Along with the trailer, NBC also released the first official synopsis for Heroes Reborn, so fans finally have something concrete to anticipate. Apparently the miniseries will pick up shortly after a devastating event with global implications: "A year ago, a terrorist attack in Odessa, Texas, left the city decimated. Blamed for the tragic event, those with extraordinary abilities are in hiding or on the run from those with nefarious motives."

The first character to appear onscreen is Carlos, played by Guzman, the 27 year old actor most well-known for starring in the fourth and fifth Step Up movies — and also for playing the world's most unbelievable high school student in this year's Jennifer Lopez thriller The Boy Next Door. According to the press release, "A different type of hero is emerging through former soldier Carlos," whatever that means. Here, he can be seen delivering a lecture on potential to an auditorium full of schoolchildren.

The former Chuck star trades in his likable spy for a menacing vigilante. He's one of those previously mentioned persons "with nefarious motives" our heroes are on the run from: "Two such vigilantes include Luke and Joanne, who are seeking to avenge a tragic loss."

The original Heroes had superpowered teenager Claire. Heroes Reborn has superpowered teenager Tommy, played by the 19 year old actor audiences most likely know as Once Upon A Time's villainous Peter Pan. "While in hiding, some are discovering their newfound skills. Awkward teen Tommy just wants to be normal and win the girl of his dreams, Emily, but normalcy is virtually impossible after learning of a new ability that terrifies him."

This unknown Japanese actress will be featured heavily as a budding superhero with daddy issues: "In Tokyo, a quiet and unique young woman, Miko, is trying to track down her missing father while hiding an extraordinary secret that will make her a force to be reckoned with." Is there any chance that her conspicuously absent father ISN'T Hiro?

The sole returning cast member among Reborn's main cast is Coleman's Bennet — referred to affectionately by fans as HRG (short for Horn-Rimmed Glasses, his sobriquet before the show revealed his real name). What will HRG be up to this time around? Apparently sometime in the past five years he's, "gone off the grid but conspiracy theorist Quentin Frady finds him and opens his eyes to the truth behind the Odessa tragedy."

The following five actors aren't prominently featured in the show's first trailer, but, thanks to the press release, we at least know who they'll be playing:

This British model and Twilight Saga: Breaking Dawn — Part 2 actress will appear as the aforementioned Joanne, aka Luke's partner in vigilanteism.

The comedic actor most recently seen as Stu in NBC's short-lived sitcom A To Z will play the conspiracy theorist who brings Bennet out from hiding.

Yarosh, who recurred on Seasons 4 and 5 of Shameless as Holly Herkimer, will play another young person grappling with her newfound powers: "Coming from a very sheltered upbringing, a bold and ethereal teenager, Malina, has been told she is destined for greatness."

Kihlstedt, who has played supporting roles in films like Deep Impact and Home Alone 3, and who has played recurring roles on shows like Dexter, Nashville, and Masters Of Sex, will appear on Reborn as Erica, "the head of the highly successful tech conglomerate Renautas, [who] has an agenda of her own."

This young actress, who has popped up in episodes of Criminal Minds and Disney's Liv And Maddie, will play Tommy's dream girl Emily, aka the Zach to Robbie Kay's Claire, if you will. (Zach was the non-powered friend of Hayden Panettiere's cheerleader, played by Thomas Dekker in Season 1.)

Of course, the most exciting part of the trailer for most viewers will be the closing glimpse of fan-favorite character Hiro. He won't be the only familiar face to pop up, either, seeing as how "For better or for worse, some are fated to cross paths with assorted heroes of the past." Other stars of the original Heroes who will return in recurring roles include Greg Grunberg (Matt Parkman), Sendhil Ramamurthy (Mohinder Suresh), Cristine Rose (Angela Petrelli), Noah Gray-Cabey (Micah Sanders), and Jimmy Jean-Louis (the Haitian).

Oh, and Orphan Black fans can take solace in the fact that recently departed cast member Dylan Bruce will be popping up on Heroes Reborn in an undisclosed supporting role. Check out the trailer below.