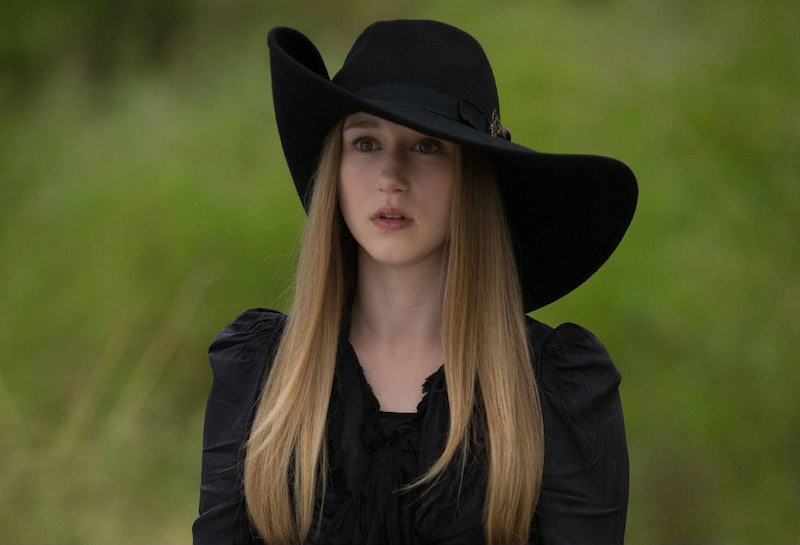 This week, American Horror Story: Coven us a curve ball — as it always does. Queenie turned against the coven and turned in her new "friend" Delphine LaLaurie into the ruthless Marie Laveau. And this is after Coven has spent most of this season trying to make us sort of like Delphine in her new, humbler form. But it begs the question: since Queenie only turns when she finds out about the horrible things Delphine did, is she really that evil? Is she just seeking to seek revenge for Delphine's victims? She can't be wholly alright, because even someone who's willing to cut someone up with a tiny sickle, as Queenie does to Delphine at the end of the episode, cannot be totally alright. (Dexter the helpful serial killer was still a guy who got off on slicing people up, folks.) It was a swift turn in Queenie that made us question just how much evil she is capable of.

For that matter, is anyone on this show straight good or straight evil? It's all a little murky for these New Orleans residents, so we took it upon ourselves to sort it all out. Which witch is the most evil of them all?

Here they are from not so bad to hell incarnate:

Ultimately, Nan is a sassy lady who appreciates the value of of a human life (remember, she risked her own to save the handsome next door neighbor).

Wrongdoing: She's defended her mother against the witches' council — of course, she didn't know she was abetting a criminal. Then comes this week, where she suggests the only way to keep Fiona from killing again is to murder her. Sure, it's a matter of rescuing Zoe from her wrath, but it doesn't take her long to reach that conclusion.

She's not exactly evil, but she's more than a step beyond sweet and innocent.

Wrongdoing: She just seems like she's got something up her sleeve. But so far, Misty's killed a few nasty guys who were responsible for burning her at the stake and she's made up for it by healing Kyle, regenerating Madison, and (we think) regenerating the witch Fiona burned.

She ultimately seems good (she does worship Stevie Nicks, so she can't be that bad). Of course, we've been fooled before.

Wrongdoing: She's generally pretty prickly and she did kill a bus full of boys (after most of them gang-raped her, to be fair). Madison is not a very nice girl and she'd probably strike out in anger at whoever crossed her (need we remind you of the flaming drapes incident at the neighbor's house), but she's not ultimately doing it because she's evil.

Wrongdoing: She willingly killed a fratboy for revenge (she was pretty justified there). She's a little strange with Kyle — she's tried to kill him twice — but ultimately, she's unable to take his life. She's willing to extract information from Spalding and then stab him, but she has to take a sad cold shower afterwards. Ultimately, she's a very powerful witch trying to ensure her survival — and that means putting her power to destructive use against Fiona.

Zoe's not outright evil right now, but she's slowly learning to embrace her darker side, which makes us concerned that she could eventually cross over to the Fiona side of things.

Wrongdoing: At first, it seemed Queenie was one of the most compassionate people on AHS, but in the most recent episode, she let go of her capacity for compassion. Part of the reason is that Delphine revealed her true past, but she did express her true desire to be a better person (and I suppose there's not a whole lot of research on the effect of immortality on people's morals). Queenie not only rejects her plea, she tricks her into being captured by Marie Laveau, and what's worse: Queenie actually lifted her hand to torture and slice Delphine herself.

Queenie may have been good for most of the series, but it seems her desire to be loved has made her an emotional wreck capable of atrocities none of us thought possible. And now that she's with Marie Laveau, it's likely she'll be asked to do much worse.

Wrongdoing: She's sent zombies after the coven, she's had Cordelia's husband on a life-long mission to kill witches, she sent the Minotaur after the ladies, she killed Delphine's helpless family as a punishment to Delphine, and she's capable of the same torture that made Delphine infamous. Marie is a scary woman.

However, she brings that hatred and viciousness from a place of pain. She experienced racism at its worst and as such, she finds it hard to exhibit compassion for her enemies. Still, she's dangerous.

Wrongdoing: She kills to maintain her youth. She kills because she's bored. She lies to get a witch burned at the stake because she's a pain in her side. She'll do just about anything she wants to get what she wants.

Fiona is the most dangerous because unlike Laveau or Queenie, she's got no reason other than her own complete selfishness for the horrible things she's done. She's self-obsessed, and that gives her evil actions a sense of hollowness — that is something to be truly afraid of.

More like this
There Are Only Four 'Temptation Island' Couples Still Together
By Brad Witter
What Does Michael Peterson’s Family Think Of 'The Staircase'?
By Arya Roshanian
Everything To Know About ‘The Handmaid’s Tale’ Season 5
By Amanda Whiting
The 'Grey’s Anatomy' Season 18 Finale Might Have Had A Sneaky April Easter Egg
By Grace Wehniainen
Get Even More From Bustle — Sign Up For The Newsletter