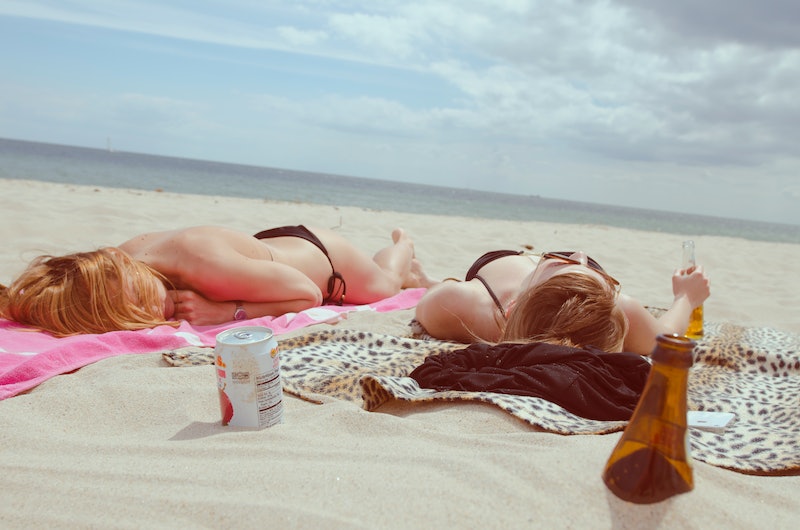 I realize I can't speak for all Australian people. I am but one in a country of 23 million wonderfully unique people. But what I can do is speak in generalizations, because sometimes stereotypes aren't damaging or hurtful, they're just mostly observations based on truth. Like many Scandinavians are tall and blonde. Or Chinese people mostly eat with chopsticks. Or Australians go to the beach a lot. These aren't intended to profile negatively, they're just things that are what they are. And so, Australian women being as Australian women tend to be, I'm going to tell you why you should date an Australian woman based on some very loose character traits that tend to permeate fairly consistently amongst all the Australian women I know.

Who doesn't love a foreign accent? Never mind that most of the time you can't understand what she's saying (like my boyfriend), all that gibberish is still pretty cute.

I happen to think Melbourne has the best and most diverse selection of food of any city I've ever been to, including New York. Generally, Australians like quality produce and all sorts of flavors, so you're going to be able to share some great meals with an Aussie woman.

Australia, oddly, is also home to some of the best coffee and baristas in the world, which isn't just a my opinion thing, it's a fact thing. So if you like coffee, you'll find a world of wonders and delights with your Australian girlfriend.

So many urban Australians, like myself, are first generation from immigrant families, and those who are not have grown up in rich communities with diverse heritage. Which means most urban Australians, women or men, are what you'd call "cultured", although you probably wouldn't call them that because it sounds really wanky.

5. She probably knows how to pitch a tent

I remember being struck by how little the people (not just women!) I was meeting in New York knew how to do for themselves. Australian girls grow up spending a lot of time outdoors, and develop skills you wouldn't even think of in other places, like pitching tents for camping or running a BBQ. It's weird, simple things that you don't think about mostly, but Australian girls have some hidden practical talents that people who live in cities generally don't get the opportunity to learn. It's not even a point of pride really, because when you're in Australia it doesn't seem so much as a skill as just something you do.

I'm not going to sit here and pretend like and Australian woman doesn't want her date to pay for dinner. But overall, Australian women don't expect to always be paid for, and even at the start of a dating relationship, are happy to go halves or get the next round.

I don't know why, but Australians, generally, love to travel. Because we're so far away, when we travel, we have to really commit to traveling. If you're looking to backpack around Europe, a little Aussie might be a really great companion.

8. If you love summer, she probably does too

Not all Australians are partial to summer. There are cold seasons and parts of Australia that snow. But generally, if you're a summer person, an Australian girl is a good bet on matching your seasonal joy to your partner.

9. She likes to drink

Australians love a social drink or four. What's not fun about that?

I love going home because people say hi to you in the street. It's such a huge jump from what it's like in New York. People talk to you everywhere, and I've made girlfriends standing in line for the bathroom. In other big cities, people can be more reserved and defensive with strangers, but Australians generally seem to be up for talking to anyone. You can certainly take your Australian girlfriend into any social situation and she'll hold her own.

This woman grew up in a country where nearly anything could kill her. So she's definitely got her wits about her.

You've probably never really, seriously thought about going to Australia before, but now you have a reason! It's the best country in the world, and if things go well, you might even get the chance to move there. Aren't you lucky?