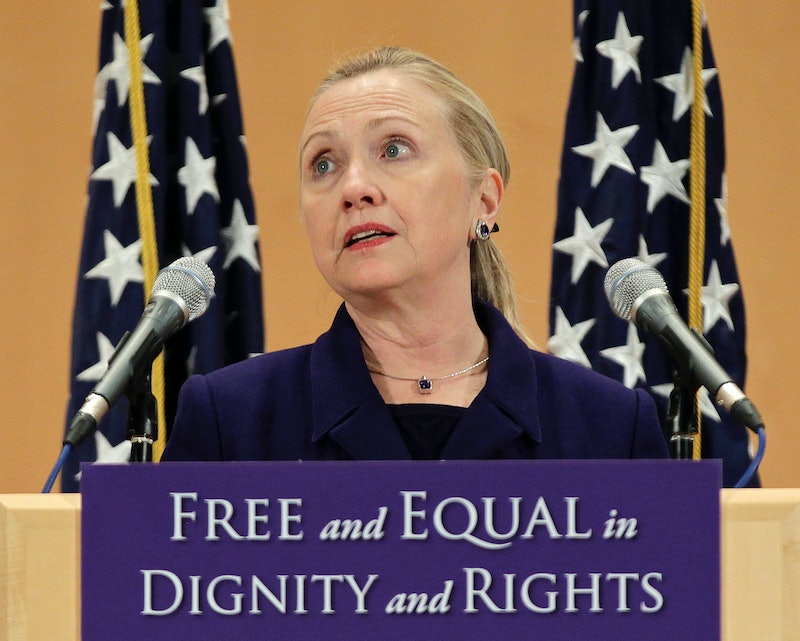 Despite criticisms that she has flip-flopped on gay rights through the years, it's undeniable that the Democratic presidential frontrunner has shown strong and consistent support for the LGBT community's right to marry in her nascent 2016 campaign. So of course, Hillary Clinton weighed in on the Supreme Court decision to legalize same-sex marriage on Friday, June 26. It's probably no surprise that she's thrilled.

After the announcement, Clinton issued this statement on Twitter: "Proud to celebrate a historic victory for marriage equality — & the courage & determination of LGBT Americans who made it possible. — H"

Just days before, Clinton's campaign put out a video called "Equal," which showed various gay couples getting married after years of fighting for the right to do so. The completely tearjerking clip ended with Clinton saying: "Gay rights are human rights, and human rights are gay rights," riffing from her popular quote about women. The final shot of the video read, along side Clinton's logo, "Stand with LGBT families."

On April 28, when the Supreme Court heard oral arguments on the same-sex marriage case, Clinton turned her logo rainbow and tweeted:

One of the couples in "Equal" also made an appearance in Clinton's campaign announcement video, saying that they were going to get married that summer. Clinton's decision to include gay couples in her debut and feature equality merchandise in her campaign store made it clear that this time around, she wasn't wavering on where she stood on same-sex marriage. But that wasn't always the case.

Today is one of those days we'll tell our grandchildren about. Marriage equality is now the law in all 50 states.From Stonewall to today’s decision, the courage and determination of the LGBT community has changed hearts, minds, and laws. Generations of advocates and activists sacrificed so much for this victory.This is our country at its best: inclusive, open, and striving towards true equality.But the struggle for LGBT rights doesn’t end with this triumph. Our work is not finished until every American can not only marry, but live, work, pray, learn, and raise a family free from discrimination and prejudice.I will never stop fighting for every American who needs a champion. Jenny, are you with me?Add your name to celebrate history:https://www.hillaryclinton.com/history/Thank you,Hillary

She also released this statement on Friday:

Along with millions of Americans, I am celebrating today’s landmark victory for marriage equality, and the generations of advocates and activists who fought to make it possible. From Stonewall to the Supreme Court, the courage and determination of the LGBT community has changed hearts and changed laws.

This ruling is an affirmation of the commitment of couples across the country who love one another. It reflects the will of the vast and growing multitude of Americans who believe that LGBT couples deserve to be recognized under the law and treated equally in the eyes of society. And it represents our country at its best: inclusive, open, and striving towards true equality.

But we know that the struggle for LGBT rights doesn’t end with today’s triumph. As love and joy flood our streets today, it is hard to imagine how anyone could deny the full protection of our laws to any of our fellow Americans—but there are those who would. So while we celebrate the progress won today, we must stand firm in our conviction to keep moving forward. For too many LGBT Americans who are subjected to discriminatory laws, true equality is still just out of reach. While we celebrate today, our work won’t be finished until every American can not only marry, but live, work, pray, learn and raise a family free from discrimination and prejudice. We cannot settle for anything less.

Clinton, like many politicians who have been in the national spotlight over the last decade, has shifted her views on same-sex marriage over time. When she started her campaign for Senate in December 1999, Clinton said that she support the Defense of Marriage Act, which her husband had signed into law in 1996. But she added that she supported same-sex unions.

In 2004, she spoke against a federal measure that would ban same-sex unions. In 2006 she declared it a state's rights issue. In 2007, during her first run for president, she backed away from DOMA but still did not support same-sex marriage. According to PolitiFact's Flip-O-Meter, which looks at how many times politicians switch sides in an argument, Clinton's opposition to same-sex marriage largely changed with the rest of the country's in 2013.

It's enough to make your head spin, but she's in good company with politicians waffling on the issue. But one thing's for sure, Clinton has now given her full support.