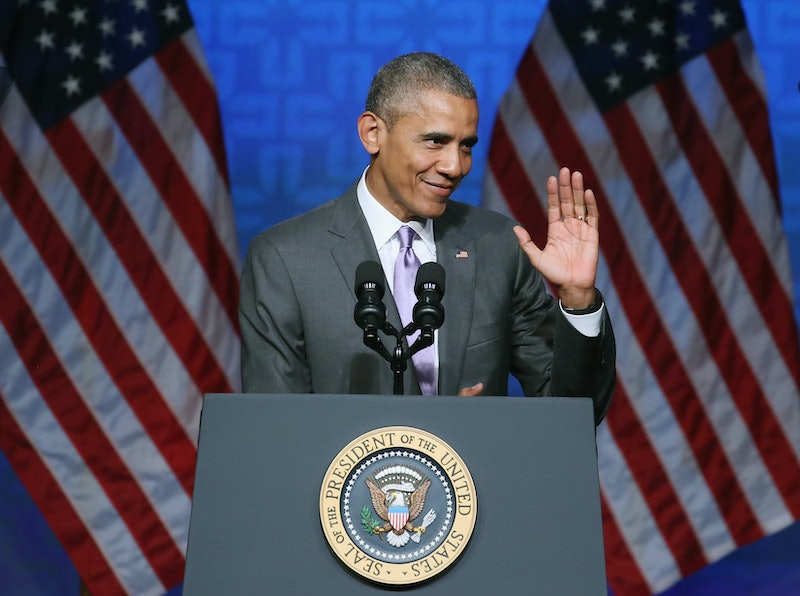 The Supreme Court finally made same-sex marriage legal everywhere in the U.S., and President Obama is on board with the decision. After months of waiting, SCOTUS announced the monumental decision on Friday, saying “same-sex marriage bans have been ruled unconstitutional" in the opinion. Celebrations popped up all over the country in response to the ruling, and the nation's leader was also in a celebratory mood.

After the ruling was announced, President Obama tweeted: "Today is a big step in our march toward equality. Gay and lesbian couples now have the right to marry, just like anyone else. #LoveWins"

It's no surprise that President Obama backs SCOTUS' decision — he's been pretty vocal about the fact that he wanted same-sex couples to have the freedom to marry nationwide. In January, he came right out and said that he hoped the Court would legalize it during a YouTube interview. He said: "My hope is that they go ahead and recognize what I think the majority of people in America now recognize. Two people who love each other and are treating each other with respect, and aren’t bothering anybody else, why would the law treat them differently?"

Obama hasn't always been a supporter though; his views on the subject shifted over the years. During the 2008 election, Obama said: "I believe marriage is between a man and a woman. I am not in favor of gay marriage. But when you start playing around with constitutions, just to prohibit somebody who cares about another person, it just seems to me that’s not what America’s about." In 2012, he told ABC News that he had changed his mind, saying, "I've been going through an evolution on this issue. I’ve just concluded that for me personally it is important for me to go ahead and affirm that I think same-sex couples should be able to get married." He said he originally hesitated on gay marriage partially because he thought civil unions would be "sufficient," but Sasha and Malia helped change his mind when they didn't understand why same-sex parents would be treated differently. "That's the kind of thing that prompts a change in perspective," Obama said. Thankfully he came around on the issue.

President Obama got the good news he was hoping for, as did same-sex couples and LGBT allies across the nation. The fight for marriage equality has a victory at last.