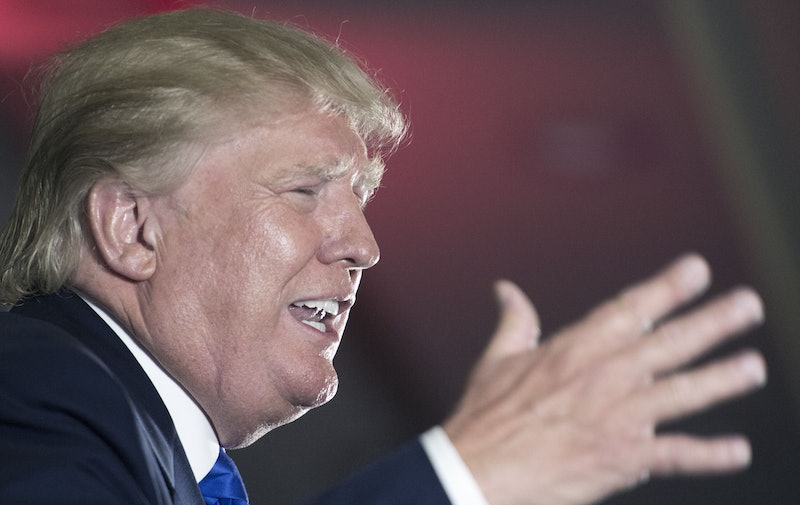 American Spanish-language broadcast television network Univision said Thursday it would drop the Miss USA pageant and cut ties with Republican presidential candidate Donald Trump over recent comments he made about Mexican immigrants, according to the Associated Press. During his presidential kickoff speech last week, Trump said Mexican immigrants are "bringing drugs, they're bringing crime, they're rapists" before admitting that "some, I assume, are good people." He also advocated for building a wall along the southern U.S. border. Unfortunately, those aren't the only rTrump's comments on Mexican immigrants aren't the only racially-targeted or inappropriate things he's ever said.

Trump has previously made other comments about Mexican immigrants and black people. In 2011, in comments that weren't as inappropriate as some of his have been, he said the fact that 95 percent of black people in New York backed President Obama was "frightening," according to USA Today. Then, he made one of his most famous comments about the black community when he said, "I have a great relationship with the blacks. I've always had a great relationship with the blacks," according to USA Today. Trump is also known for being a birther, or someone who believes that Obama isn't actually a U.S. citizen. He was so loud in his demands for Obama's birth certificate that CNN asked him in 2011 whether his demands were race-related, and he said he was the "least racist" person. Regardless of the answer to that question, Trump has made a few inappropriate, race-related comments in the past:

On The Baltimore Riots

Trump used a racially-targeted blanket statement to say that Obama's race had a negative impact on the actions of people in Baltimore, calling protesters and rioters, "thugs." He tweeted a message that is inappropriate, to say the least:

On Mexican Filmmakers Doing Well At The Oscars

Trump was really upset that Mexican filmmakers succeeded at the Oscars in February. Director Alejandro Iñárritu took home best picture for Birdman, and Trump phoned into Fox and Friends to express his feelings.

It was a great night for Mexico, as usual. This guy [Iñárritu] kept getting up and up and up. I said, ‘What is he doing? He’s walking away with all the gold.’ Was it that good? I don’t hear that. But it was certainly a big night for them.

Then, as if he hadn't made the comment about how things "being great for Mexico" clear enough, he decided to tweet about it and get a little clearer and a lot more inappropriate.

On Black People In An Office Environment

In 1991, Trump was accused of making racial slurs against black people in former president of Trump Plaza Hotel & Casino John R. O'Donnell's book called Trumped!, according to the Huffington Post. O'Donnell claimed Trump once said, in reference to a black accountant, that "laziness is a trait in blacks." O'Donnell also alleged that Trump said, “Black guys counting my money! I hate it. The only kind of people I want counting my money are short guys that wear yarmulkes every day."

On Renting Apartments To Black People

In 1973, Trump was sued by the Justice Department for alleged racial discrimination in renting apartments from the Trump Management Corporation, according to HuffPost. The case alleged that the company had discriminated against black people who wished to rent apartments in Brooklyn, Queens, and Staten Island. The government charged the corporation with quoting different rental terms and conditions to blacks and whites and lying to blacks that apartments were not available, according to reports of the lawsuit cited by the HuffPost. Trump sued the Justice Department for defamation, but the case was dismissed. Two years later, the company settled the case and promised not to discriminate against blacks, Puerto Ricans, and other minorities.

But the promise didn't stick for long. Three years later, the Justice Department charged the company with continuing to discriminate against black people, for example, by telling them that apartments were not available, according to the HuffPost. The company was forced to compensate victims of discrimination and also report to the department on its compliance. But there were still problems. New York City's human rights commission had to get involved and regularly dispatched investigators to search for examples of discrimination in Trump-owned buildings. Trump told the New York Times that the investigation was a “form of horrible harassment,” according to the HuffPost.

On TV Shows About Black Culture

Trump doesn't seem to understand why anyone could make a TV show about black culture, and he also wants to be the authority on how that culture can label itself. When ABC's show Black-ish came out, he tweeted something that clearly says he doesn't understand white privilege.

Sigh. Come on, Trump. Get your decent human act together.