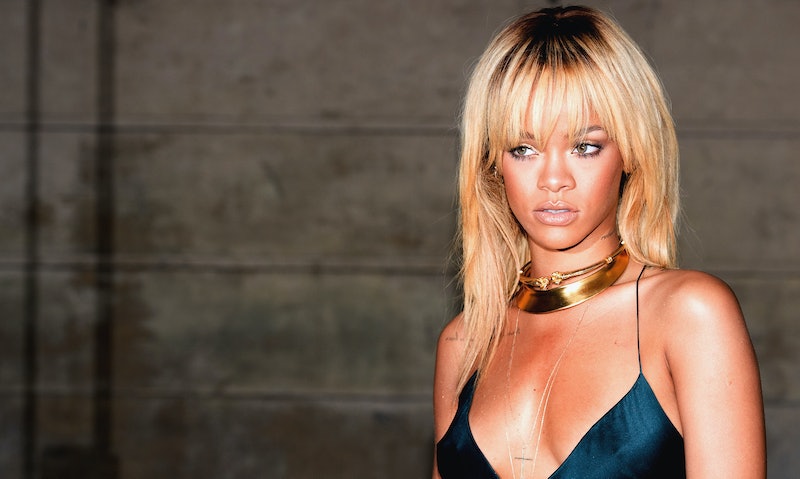 I'm pretty convinced that Rihanna changes her 'do daily. Rihanna's many hairstyles suggest that she is super non-committal when it comes to her coif. She swaps out length, color, and style with the kind of frequency that might make most of us cringe. All that processing, coloring, chemicals, and applying possible extensions is absolute murder on one's natural locks — but I'm so glad she does it for us.

Rihanna certainly has some signatures look, like her pixie cut, which showcases her stunning, fine features. That's a style she has revisited several times through the years. The "American Oxygen" singer also tends to play with various shades of red, often favoring a fire engine hue. She'll also have fun with several variations of the bob, be it asymmetrical or chin-length, with clean lines and bangs.

Since RiRi has had so many hairdos since bursting on the scene, it's, like, insanely hard to keep track of them all. While we may vividly recall those aforementioned styles, there are plenty of cuts and colors that I've straight up forgotten about. Here are 17 Rihanna hairstyles you might have missed, just by blinking.

Lobs are so "in" with celebs right now, but Rihanna did a flame-hued lob ages ago. Even with the bold color, it was incredibly pretty.

One of her earlier styles was this head-hugging, straight bob.

The pop starlet has worn a long bob with bangs pretty regularly, but remember when she did an Anna Wintour bob, with heavy bangs and in a chin length? It was severe, but she worked it like she always does. Maybe this cut is why Wintour made Rih a Vogue cover girl!

Rihanna also went with an asymmetrical bob for a brief moment post-Wintour.

Rihanna doesn't often go mega-long — but when she does, she leaves an impression, like with these mermaid tendrils.

This mom shag wasn't my fave Rihanna look, which is probably why I forgot about it. But the fiery color was certainly a loud touch.

Mermaid hair is a thing in 2015, but Rihanna did a while ago during her red phase. She was like Ariel from The Little Mermaid.

RiRi did a voluminous ponytail like the one that Ariana Grande is now known for. She rocked it for an NBA All-Star weekend and it was way sexy.

A golden shag with visible roots? It was so messy and so rock 'n' roll.

These big curls were super '70s. They might have been boring if not for those peek-a-boo roots.

Did the singer look to Kris Jenner for inspo? Skrillex? Both?

OK, this time she was totally doing the Kris Jenner 'do.

Defined spiral curls? That's not something RiRi pumps very often, and I'm way into it.

Two-toned hair was so mid-'00s, and RiRi rocked it to the extreme.

Her pixie generally has short bangs, but she also goes long once in a while.

16. The Even Longer Pixie

Her bangs fell well past her brows and lashes and into her eyes. It had a very '80s, helmet-y vibe.

Rihanna Grande again! RiRi's half up, half down do was so pretty.

How was that for your walk down the memory lane that is Rihanna's hair?

More like this
How To Style Your Hair For A Festival, According To Maya Jama’s Hairstylist
By Tomi Otekunrin
11 Heat-Free Hairstyles That Anyone Can Master
By Paris Giles
Why Sarah Jessica Parker Wanted Fans To Stop Calling Her Hair Choice “Brave”
By Brad Witter
Kim Kardashian Chopped Her Platinum Hair Into A Lob
By Olivia Rose Ferreiro
Get Even More From Bustle — Sign Up For The Newsletter