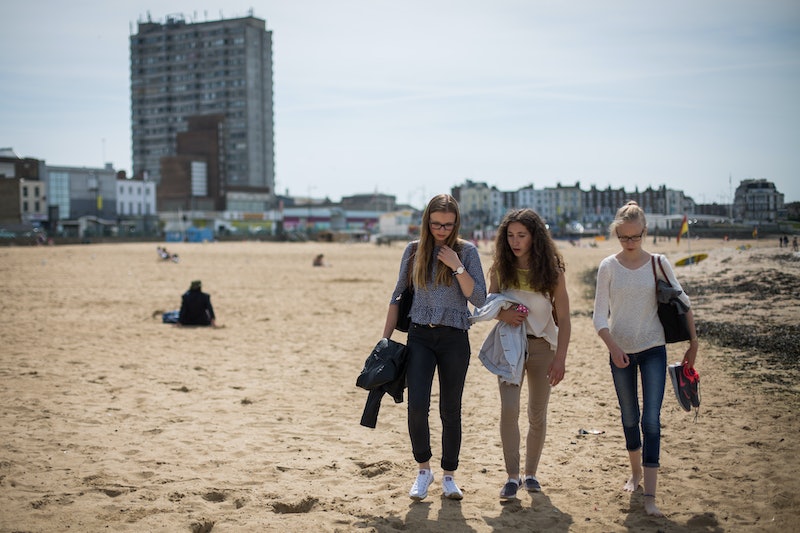 Every summer we hear about a scary fin sighting at the beach, but people tend to forget that there are about a billion things more likely to kill you than a shark attack. Right now, the nation is feeling some intense shark-mania that (for once) has nothing to with Shark Week or bad Syfy movies. In the past two weeks, there have been four shark attacks off the coast of North Carolina. All took place in shallow water, and while one survivor walked away with a scraped foot, two other teenagers had their arms amputated as a result of their bites.

America has a strange and morbid obsession with sharks, ranging from curiosity to terror. We watch Shark Week and Jaws religiously and take joy in the idea of these underwater beasts. But we also overreact the second we might possibly meet one. As many have pointed out, our fear is kind of irrational. The mythos surrounding shark attacks make it sound like every second, someone out there is being devoured. When in reality, sharks contribute to an average of five deaths annually. We are literally more likely to die by falling out of our beds.

However, that's not to say that there isn't danger lurking in the warm waters and sandy beaches of your travel destination. The beach is a silent killer. So pack up your umbrellas and sunscreen because you're walking into a death trap. Don't believe me? Here are the main threats you face when you go to the beach.

If you've ever had heat stroke, you know how serious of an issue it is. Without proper protection from the sun's UV rays or proper hydration, you're at serious risk of severe sunburns or heat exhaustion. Thousands die each year from a combination of sunburns and heat stroke. And that doesn't even take into account the long lasting damage that the sun can do. Prolonged exposure to the sun is known to cause melanoma, which claims the lives of 50,000 people worldwide every year. So just stay inside or at least in the shade.

Don't get me started on how much you should avoid the water. According to the National Oceanic and Atmospheric Administration, rip tides are the leading hazard facing beachgoers. Think it's just a catchy song? Wrong. These powerful currents can suck you in and carry you far out to sea. Don't worry though — if stuck in a current, you're more likely to die of exhaustion before you drown. Remember to always swim with the current, not against it.

Drowning is also a major concern. There are between 400 to 500 drowning deaths a year in the United States, and that's only counting deaths that occur in oceans and lakes, not manmade pools. Pool deaths are actually way higher so don't think that's a viable alternative to your beach vacation.

If you're a strong swimmer and not worried about drowning, I have one more fear to instill in you that can come with venturing into the water: E. coli. Last year nine people in Florida alone died from a flesh-eating bacteria that lived in the water. These bacterias can come in all shapes and sizes, but are usually a result of fecal contamination. Yum.

That's right. Sand is a killer. Between 1985 and 2007, there were 31 sand hole deaths. Yup, sand holes. Ill-constructed sand tunnels are likely to cave in, and being buried under sand is a serious concern, considering that the annoying substance is heavy and very difficult to move. And impossible to get out of shoes. Or any crevice of your body really.

Just because the sharks aren't usually out to get you doesn't mean nothing else is. Be sure to avoid jellyfish, who kill anywhere between 40 to 100 people annually and can do some serious damage. Do yourself a favor and never ever Google "box jellyfish sting." (I warned you.)

If the jellyfish don't get you, the mosquitos may. Commonly referred to as the most dangerous species in the world, mosquitos carrying the West Nile virus cause an estimated 800,000 fatalities each year. Also be sure to look out for coconuts, who are responsible for about 150 deaths annually.

Everyone loves a good hotdog, but almost 3,000 people choke to death each year, a number that doesn't even come close to the 5,000 who die from uncooked or contaminated food in the country alone. So put down the hamburgers and put away the Weber grill (which is probably also a hazard, but I don't have statistics for it. For good measure, just throw it away though.)

Yeah, yeah, this isn't beach-specific, but it doesn't matter how safe you think you are because something can happen at any time for any reason. Those of you who are left-handed have probably always felt pretty special and unique, but I'm here to tell you that you are actually 5 times more likely to die in an accident than a right-handed person. I have no idea why.

More like this
13 Summer Solstice Quotes To Celebrate The Longest Day Of The Year
By Sadie Trombetta
The Summer Solstice Spiritual Meaning, Explained
By Jessica Booth and Brittany Beringer
The 7 Best Waterproof Sprays For Shoes
By Marshall Bright
The Guide To “Witches Stairs” & Why They’re Actually Great For Small Spaces
By Emma Garza
Get Even More From Bustle — Sign Up For The Newsletter