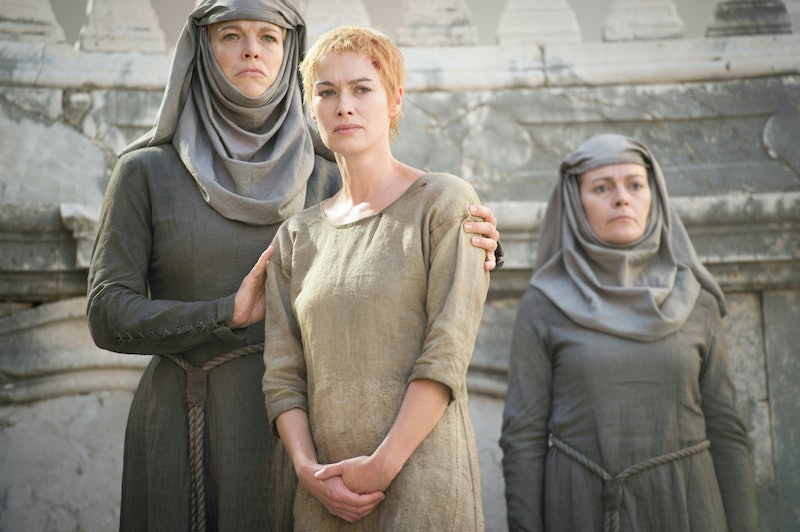 Over eight million people tuned into the Game of Thrones Season 5 finale a mere two weeks ago, and, at this point, I assume everyone and their mom has watched the finale, but just in case, here's that spoiler warning, because let's talk about that finale. No, not about the part when Jon Snow (maybe?) dies, but Cersei's walk of shame through King's Landing. As you probably now know, Game of Thrones actress Lena Headey chose to use a body double in the scene "for several reasons," and that body double's identity has now been discovered. So, who's the woman who really bared it all and took a walk of shame through King's Landing? That would be actress Rebecca Van Cleave.

I completely believed that it was actually Headey during the entire scene, so that goes to show you how well it was done. In the days following the finale, everyone (read: me) was so upset about about Jon's alleged death, that we were too busy to even question whether it was really Headey or not. I assumed it was. So did many others. But then, later on in the week, the U.K. press "outed" the fact that a double had been used, and gave this second Cersei a name: Rebecca Van Cleave.

"I'm not going to lie," Van Cleave explained to the The News Leader, "It was really hard not being able to say anything. But, a few people on the Internet put two and two together and someone added a credit on my IMDB page that I couldn't take down, and the rest is history."

It was never the intention to keep her veiled in secrecy, it just wasn't a thing that came up (because everyone, a.k.a me, was too busy Googling stuff about Jon Snow to pay close attention to Headey's body parts, I guess). But, now that word is out, Van Cleave is talking about the experience, and about how wonderful it was to take a walk in Cersei's shoes.

In an interview with Entertainment Weekly , Van Cleave said that, “It was one of the scariest, most wonderful, most gratifying experiences I could have imagined. I never in a million years would have thought I would be in Dubrovnik surrounded by hundreds of extras and crew members throwing food at me, but it was amazing.”

She also revealed that Headey — dressed in a nude cat suit — walked with her the entire time, coaching her through Cersei's feelings, so both their performances could be seamlessly fit together. But, take away Cersei, and who exactly is Van Cleave?

Van Cleave has been acting, on both stage and screen, and modeling since she was young, but Cersei was her first nude scene so far. She had a part in The Royals earlier this year, but so far that's been her biggest role to date. That is, until Cersei came along. And, from the looks of her Instagram, she's slowly breaking into music, too, since a lot of images show her hanging out in a studio behind the microphone. According to her IMDB bio, her first EP, The Bedroom Sessions, will be out in July.

It also appears as if she's been a Game of Thrones fan for quite a while.

Through the depths of my Van Cleave-lurking, I couldn't find anything from her time on the set of Game of Thrones, but there's a reason for that. She was, in fact, sworn to secrecy about the role, since even us viewers weren't sure if we'd see Cersei's walk this season. As EW writes, "Friends and family [didn’t] yet know about her role on the hit show" until after it had aired.

Going forward, she's not going to be just a body double anymore. She just wrapped up a shot horror film called The Prey, and continues to book modeling gigs along with commercials.

Van Cleave is clearly talented to have been chosen for the role, and now that her name is out there I'm sure her star will only continue to rise.