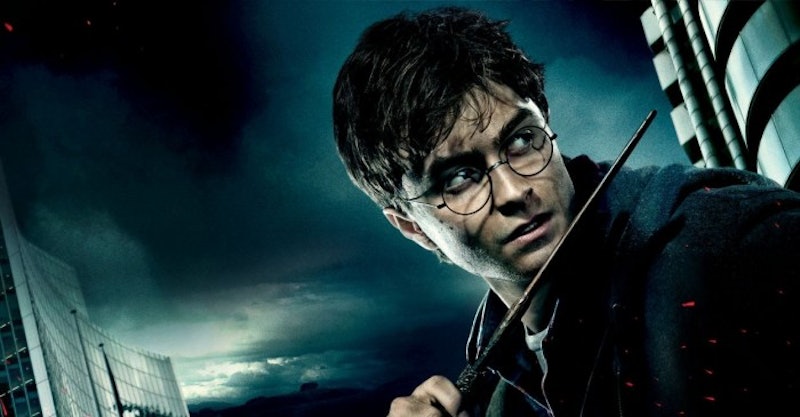 He's back from the dead, and I can't even deal. J.K Rowling announced that a Harry Potter play called Harry Potter and the Cursed Child is coming to London's West End in 2016. Suffice to say, I'm not emotionally prepared, and my morning was spent racked with sobs and researching plane tickets to London (it costs like NOPE thousand dollars, to say the least). But among all of our happy tears, hyperventilating, and cursing the gods that we aren't British we all have to ask: who is the titular "cursed child" anyway?

..I mean, I don't know. Considering that Rowling is insisting that the play is not a prequel, and Harry hasn't been a child in a very long while (I mean, he'd be pushing 30-something today, right?), I'm really hedging most of my bets on next gen Harry Potter children. But, in a world where no one ever TRULY dies, I guess anyone's up for grabs. You know, albeit some characters would make more sense than others. A lot more sense. To say the least.

So I assessed the situation, and this is what I could dig up. In order of probability, here are 13 suggestions of who this cursed child could plausibly be.

Cedric's really the first significant death in the series, so maybe Harry is now being haunted by his ghost? Maybe Cedric shows his past, that he was cursed all along? By his leadership qualities and dashing good looks?

Ultimately, I'm going to veto this because nobody's going to watch a play about a Hufflepuff.

...maybe it's Sirius's ghost? Maybe we can get some more Sirius backstory up in this house? He was kicked out of his family, but there's no mention of him in the nominal information we're given.

I mean, Snape seems far more cursed than most of the characters in the series. Pretty much every aspect of his life sucks. Buuuut he already has that "Half-blood Prince" moniker, and I think we got all the Snape background information that we need. He pretty much went full circle as a character; there's nothing to rehash.

Being a werewolf is a legitimate burden to deal with, but, for all the above reasons (and of course, not a prequel), I really don't think it'll be him either. I don't think any potential ghosts of the above will have unfinished business with Harry.

I mean, that dude came back in every form every for six out of the seven of the books. Why not one more for the road? Well, because it's redundant, and would take away from the poignancy the Battle of Hogwarts. No, let's not revive Voldemort for another chapter.

And, no, I don't mean George. I mean, we can either get the Fred Weasley of-the-Weasley-twins-fame E! True Hollywood story of how he became the CURSED brother, or we focus on George's son Fred, who has to bear the name of the cursed Weasley's brother.

Nope, I'm gonna veto this right now because A. I can't bear to relive Fred's death and B. This is a little bit more involved than I want it to be.

7. Some horrible unknown child of Voldemort's

Conceptually, this would work really well, and make a lot of sense. How can you be the descendant of living evil and not be cursed, literally or otherwise? But my problems with this is coming from, well, logistics. That is, what non-Bellatrix Lestrange woman would willingly pro-create with the Dark Lord?

Picture this: an alternate universe where Neville becomes the Chosen One, and Harry just gets neglected and stuck on Privet Drive by being distinctly not-chosen. I don't know what would bring upon said universe, though. Magic?

I mean, that's definitively Ron in the above gif, but think about it. Ron has anxieties about being the last and least-loved son of a mother who wanted a daughter. Hugo is, like, the 11th grandchild in an army of Weasley children. What a bummer.

Think about how Hogwarts must suck for Scorpius. "Hey Malfoy, heard your family was besties with You-Know-Who and then whimped out like little babies during the Battle of Hogwarts." That, every day. The question is, why would HARRY be involved?

I mean, if we're maybe doing a Fight Club thing, why WOULDN'T it be about Harry? EVERYTHING is about Harry. I mean, it's awkward to make a play called "Harry Potter and Basically Himself," but, if we're focusing on his past and his parents' past... well, we can't discount that as a possibility, can we?

If I was putting my money on it, I would say that Harry's godson Teddy Lupin would make the most obvious candidate for the cursed child, and it's all in the parallels. Both the sons of Marauders, both orphaned in infancy, both living with the knowledge that their parents died fighting... Teddy has a relevant tie to Harry that would allow him to reflect on his own past, as well as to flashback to the Marauders-era past in a non-prequel context. We'll see...