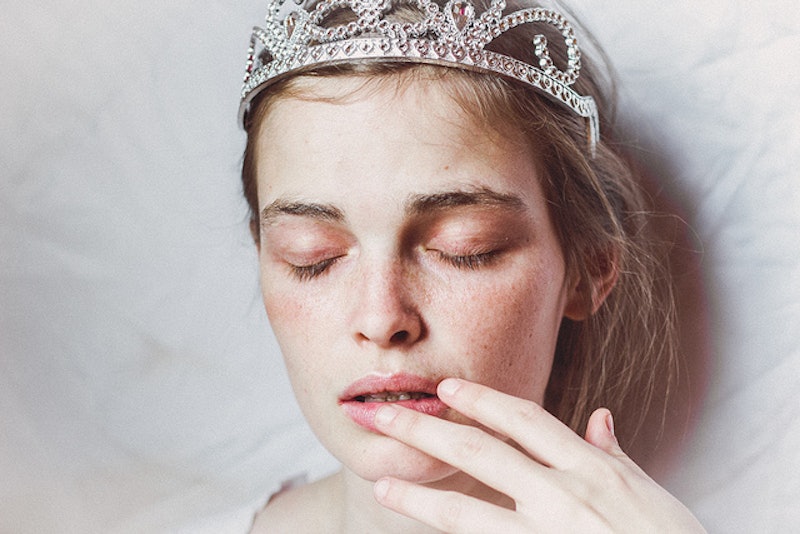 For some women, getting sexually aroused can be difficult. Whether it’s due to physical or emotional concerns, getting blood pumping to their genitals, which is what happens when people are aroused, can be trying, especially if the woman is disgusted in any way. Why would a woman be disgusted by sex? Well, germs for one thing. In the hopes of figuring out what affects sexual arousal in women, the “arousometer” has been created to gauge exactly what’s going down there.

Through the use of the “arousometer,” a vaginal photoplethysmograph shaped like a tampon to measure blood flow to the genitals, evolutionary psychologist, Dr. Diana Fleischman, studied 76 straight women between the age of 18 and 42 in regards to what turned them on or didn’t. What she found was that women have a lower threshold for disgust when it comes to sex than men do.

As Fleischman explained, “Women are more vulnerable to contracting diseases through sex than men and show worse outcomes once infected, so we should expect that women will be especially turned off when they are disgusted."

Takeaway? If you’re disgusted, it’s a pretty powerful motivator to stay the eff away from getting it on. But if you're fearful, you still might be able to swing it. Strange, I know. Because that's not the only weird thing that scientists have discovered about sexual arousal, here are six more WTF scientific finds on the topic.

1. Women Can Be Aroused During A Sexual Assault

Not only does this correspond with what Fleischman discovered in regards to fear not being a major component in shutting down arousal, but other research has found that there’s an evolutionary reason for it.

According to a 2010 study, a woman’s body may become aroused during rape as a means to protect her from genital injury. This is no way means consent, but just that the human body reacts in ways that are meant strictly for protection.

2. Certain Scents Can Cause Arousal

Research has found that just smelling a specific scent can increase blood flow to the genitals. As a 1998 study found, the smell of Good and Plenty (yes, that candy), cucumbers, pumpkin pie, and lavender can arouse a woman. When combined, the scents have even more of an effect, with the combo of Good and Plenty and cucumber creating a 13 percent increase in blood flow to the genitals.

3. Men Can Become Aroused Under Threat Of Electric Shock

A 1987 study found that when men were placed in anxious situations, they became aroused. The specific research threatened men with an electric shock if they didn’t get and maintain an erection. Surprisingly (or not surprisingly), men were able to be aroused pretty much on command.

According to psychologist Meredith Chivers, watching bonobos, a species of ape, have sex often arouses women. This isn’t to suggest that women want to have sex with apes, but that even being exposed to images of bonobos getting it on, can create an arousal in them.

5. The Smell Of Women’s Tears Can Kill Arousal In Men

A 2011 study found that when men in a controlled experiment were asked to “sniff” women’s tears, they immediately experienced a decrease in their sexual arousal. According to researchers, the smell of a woman’s tears is the evolutionary way of telling her partner she’s not in the mood for sex.

6. Spinal Cysts Can Cause Persistent Sexual Arousal In Women

While some women may have a hard time getting aroused, other women just can’t stop being aroused. A 2012 study found that persistent genital arousal disorder (PGAD) could be brought on my Tarlov cysts in women’s spines. Although not all doctors agree that this could be the reason for PGAD, the thinking is that in removing the cysts, these women could find some relief. No woman wants blue vulva all the time.

More like this
13 Ideas To Add To Your Sex Bucket List
By Kristin Magaldi
35 Sexy Texts To Send Your Partner
By Griffin Wynne and Carolyn Steber
What Are Swingers? Everything You Need To Know
By Lexi Inks
34 Quotes That'll Inspire You On Juneteenth & Beyond
By Syeda Khaula Saad and Siena Gagliano
Get Even More From Bustle — Sign Up For The Newsletter