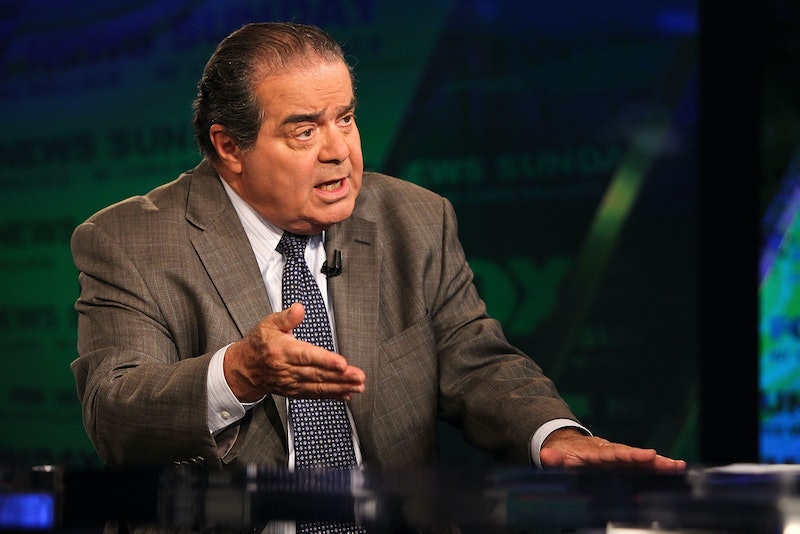 In the immortal words of Ice Cube, today was a good day. After years of legal wrangling, with multiple rulings from district courts, appeals courts, and now the Supreme Court, it's finally official: same-sex marriage is legal in America. Not just legal like, "hey, let's go get married in New York." Legal everywhere, thanks to Justice Anthony Kennedy siding with the court's liberal bloc, leaving its four conservatives — Roberts, Thomas, Alito, and Scalia — out in the cold. This much is now clear: Justice Kennedy's ruling on gay rights landed on the right side of history, and the exact opposite could be said of Justice Antonin Scalia.

There's no real drama there, except insofar as Kennedy's decision to side with the liberals is concerned. Often the swing vote on contentious, highly political cases, and an appointee of former President Ronald Reagan, Kennedy is by no means an overtly liberal justice. But his decisions over the past couple of days have brought considerable cheer to many on the American left, joining a six-justice majority to save the Affordable Care Act on Thursday, and now, affirming the rights of gay and lesbian Americans to tie the knot.

But Scalia, another Reagan appointee, earned a very different legacy on Friday — that of the cantankerous sore loser, and the demagogue.

Nowadays, we basically take it for granted that our Supreme Court is a highly politicized body. You've got your Ruth Bader Ginsburgs, Elena Kagans, and Sonia Sotormayors on one side, and your Scalias, Alitos, and Thomases on the other, and many of them speak plainly and publicly about their views on society, public policy, and so forth.

For example, when Ruth Bader Ginsburg makes a ruling involving gay rights, contraception access, or abortion, we all know (or can easily find out) how those rulings track with her personal beliefs on the issues. This isn't to say that she can't have a perfectly reasonable legal argument underlying those beliefs, but few people nowadays view the court the way we ideally would — as a truly non-political judicial body.

And of all the justices, Scalia seems most to enjoy being on that ragged edge. This was vividly demonstrated during oral arguments in Obergefell v. Hodges, the case which secured marriage equality for all Americans, back in April. After the proceedings were disrupted by a zealous, shouting same-sex marriage opponent, as Jeffrey Toobin described in The New Yorker, Scalia made a truly dismal remark.

Right after Mary Bonauto, the lawyer challenging marriage bans in several states, completed her argument, a spectator rose from a back row and started screaming, “If you support gay marriage, you will burn in Hell!” As the man yelled, “It’s an abomination!,” guards carried him from the courtroom.

That wasn’t the ugly part, though. In the quiet moment after the man was removed, as his shouts vanished into the hallway, Justice Antonin Scalia filled the silence with a quip. “It was rather refreshing, actually,” he said.

Given a willingness to say something like that in public — whether it was a joke or not is unclear, and Toobin seems unsure — and while presiding on the Supreme Court, no less, you can probably guess how Scalia felt on Friday. If you're curious whether it was a difficult call for him, he says no — in his dissent, he made it clear that he thinks the Fourteenth Amendment basically answers the same-sex marriage question before its asked. A so-called Constitutional originalist, Scalia believes that if the Amendment was written without gay marriage in mind, then it does not apply.

When the Fourteenth Amendment was ratified in 1868, every State limited marriage to one man and one woman, and no one doubted the constitutionality of doing so. That resolves these cases.

While Kennedy's majority opinion was a humane, impressive reflection of the increasing acceptance and care that same-sex couples have won all over the country, Scalia's dissent was equal parts snarl and condescension. Take, for example, his dramatic assessment of what this case means for American democracy.

Today’s decree says that my Ruler, and the Ruler of 320 Americans coast-to-coast, is a majority of nine lawyers on the Supreme Court. The opinions in these cases is the furthest extension in fact — and the furthest extension one can even imagine — of the Court’s claimed power to create “liberties” that the Constitution and its amendments neglect to mention.

Make no mistake, what Scalia is complaining about here is virtually the literal, necessary function of the Supreme Court — to determine what "liberties" are enshrined by the Constitution, and interpret laws accordingly. Obviously, some justices will disagree about what those liberties are, but the fact that a ruling can have big impact is not new, or novel, or even something that Scalia always shies away from — he was one of five Justices who formed a majority in the seismic Bush v. Gore ruling in 2000, effectively handing the presidency to George W. Bush.

In this context, it's hard to view Scalia's doomsaying rhetoric as anything more than sputtering, ideological mud-slinging. Considering that the outcome of the 2000 presidential race as close as it gets at the time, and that Gore had indisputably won the popular vote by a comfortable margin, you don't get much closer to being a "ruler" of "Americans coast-to-coast" than that.

Now, I'm sure that Scalia could defend that Bush v. Gore ruling on Constitutional and procedural grounds — the allowed time frame for the recount had expired, after all, thanks in no small part to the Supreme Court having halted it days prior. That would, at the very least, be a measured, coherent, and serious way to make that case.

But it's striking — if not terribly surprising — to see him attack his colleagues on the grounds of the ruling's widespread influence. You can accuse your fellow justices of being ideologically motivated, or causing sweeping changes if you want, but it's disingenuous to act like this is a uniquely grave instance, or as though he hasn't made such sweeping decisions himself.

So, how best to answer his complaints? While speaking at Wesleyan University in 2012, Scalia falsely claimed that the Bush v. Gore ruling "wasn't even close" at 7-2 — it was actually 5-4, making him the deciding vote — and insisted that people should "get over it."

So, given the invitation, and Scalia's legendarily combative attitude, why overthink it? Let's just reply in his own words: Justice Scalia, get over it.