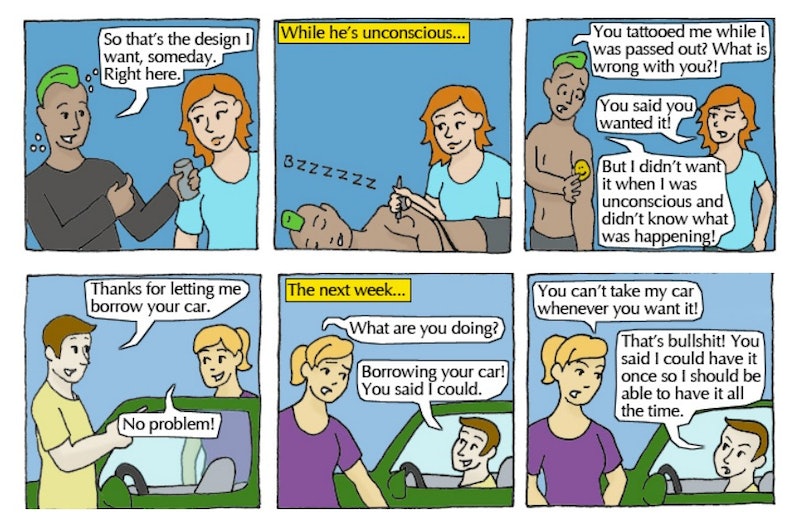 The way our society responds to victims of sexual assault and misconduct can be pretty messed up, to say the least, with all sorts of excuses made on behalf of perpetrators. Too often, victims are told they didn't fight back hard enough, led the perpetrator on, or secretly wanted the assault. But sometimes it's hard to get people to see why those responses don't make sense. So, cartoonist Alli Kirkham created a brilliant series of comics for Everyday Feminism on what these frustrating conversations about sexual consent would look like if they addressed any other type of consent.

By exposing the inconsistency with which we view sexual encounters and other types of interactions, Kirkham's comics help us realize that adherence to affirmative consent — the standard that considers only a "yes" to be consent, rather than a lack of "no" — is not a lot to ask. As Everyday Feminism's editors write in an introduction:

Consent around sex is ignored all the time, and it’s not okay. These everyday examples of how we give consent for other things shows just how absurd it is to blame sexual assault survivors or to try to justify rape in any way.

And guess what? If we bring our cultural beliefs surrounding sexual consent to other situations, it highlights exactly how ridiculous they really are. Take these 10 exchanges, for example — seven from Kirkham's comics and three from a few other sources. Would you really pull any of these moves on anyone else?

1. We'd guilt people for calling it quits in the middle of an activity they got tired of.

Just like you wouldn't make someone finish a movie with you, even if you really wanted to know the ending, it's not OK to ignore someone's wish to stop at any point during a sexual activity, even if they said "yes" to start.

2. We'd steal things from people just because they let us borrow them once.

When you don't have permission, borrowing becomes stealing and sex becomes rape. Even if someone is doing the same exact thing they did in a previous interaction, the absence or presence of consent at that particular moment completely changes the context. And, like permission to borrow a car for a day, consent to one sexual activity is not an all-access pass to someone's bedroom at any future time.

Someone can be a huge fan of a sexual act and not want it all the time, just like someone can love a song but not want it blasting and waking them up. Once again, it's all about context.

4. We'd give people things they want someday before that day arrives.

Most people (though not all) have sexual desires, but that doesn't make it OK to fulfill these desires at one's whim. Especially since our society views women's sexuality as existing for men's enjoyment, openly sexual women are often treated as objects available for men's use at all times, even when they are incapable of giving consent. Just like you can want a tattoo but not want it yet — especially when you're unconscious — everyone has the right to choose when they do and don't have sex, no matter how openly they enjoy it.

5. We'd act entitled to favors from our partners.

You may decide to cook your partner their favorite meal one day but not the next; similarly, you can also decide that what happened in bed last night won't happen tonight. Your partner is not entitled to anything in the bedroom, or the kitchen, or anywhere else, even if you're in a relationship or married. And to take the analogy a step further, just as a restaurant can change its menu or not serve certain items on a given day, sex workers do not have to comply with every request from every client. Contrary to popular belief, the customer isn't always right.

6. We'd tell people they owed us participation in activities just because we expected to do them.

It's never OK to expect anything in return for going to somebody's room, buying them dinner, or doing them a favor, and it's always OK to back out of an activity, even if it's with someone who has gone to great lengths for you.

7. We'd force people into situations because of how they looked.

8. We'd blame people for crimes committed against them.

This analogy is from Tumblr, though the original source is unclear. In it, the victim of a mugging experiences all the hurdles rape victims have to jump through: accusations of not fighting back hard enough even when their lives are under threat, suggestions that they secretly wanted it, and guilt-trips about ruining the criminal's life. Our justice system doesn't subject victims of any other crime to this level of hostility.

9. We'd get mad at people for not accepting things we've offered them.

As this video from Blue Seat Studios points out, the same way it wouldn't be OK to get annoyed with someone for not wanting a cup of tea or trying to pour it into their mouth after you've brewed it, it's not OK to sulk if someone declines sex or try to pressure them into it. Another excellent point: "Unconscious people don't want tea, and they can't answer the question 'Do you want tea?' because they're unconscious... Don't make them drink the tea."

Here's a dialogue I came up with myself:

One interesting thing I noticed about these analogies is that some of these scenarios do actually happen. Sometimes people are guilted into sticking with activities they no longer enjoy, pressured into doing other people favors, or rushed into doing things they're not ready for, even outside sexual contexts. Just as we can learn from other forms of social contracts how to practice sexual consent, the standard of affirmative sexual consent can conversely help inform an entire consent culture where everyday activities like watching a movie, hugging people, or eating ice cream require the consent of all involved. Hey, a girl can dream.