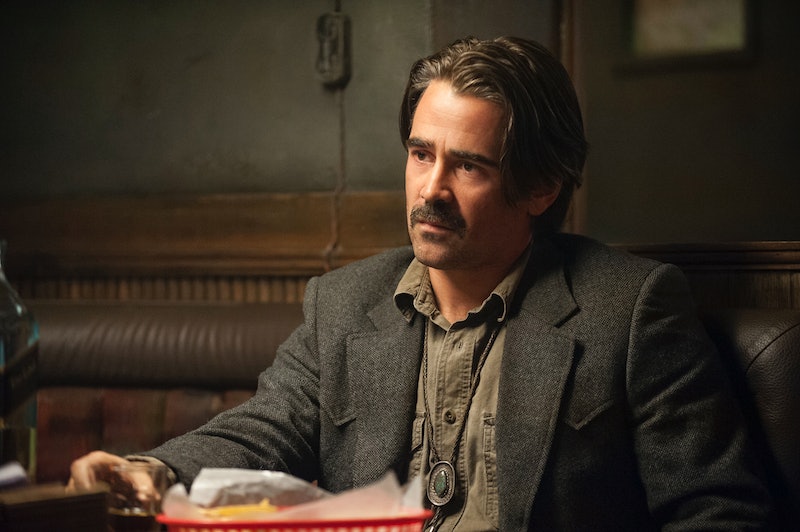 Will you ever look at a bird the same way after watching the second episode of True Detective? I won't. Colin Farrell probably won't. And whoever is behind the terrifying bird mask on True Detective certainly should not. Seriously, Mondays are hard enough, but going into a Monday with the haunting image of a giant human bird shooting Colin Farrell in the crotch makes it that much harder. If you're wondering what the bird mask on True Detective is all about, you're not alone. We don't know much about the man behind the mask, currently, but that doesn't mean there isn't some deep theorizing that can be done about it.

We first saw the bird mask in Episode 1. It was quick, but pretty terrifying, as the black bird mask was sitting "shotgun" to Caspere's killer, while the city manager (Caspere) rode Weekend at Bernie's style in the back seat. We saw the killer drive off with Caspere, probably taking him to the bench where his body would later be found.

On Episode 2 — SPOILERS — the mask made another appearance, as it was worn when Colin Farrell's character, Ray Velcoro, was shot while looking around Caspere's sex house. Why Velcoro didn't take the smooth jazzy sounds of "I Pity the Fool" playing in the background as a sign to GTFO, I'll never understand. So moral of this story: don't trust the guy with the bird mask.

There was one person that knew that Ray was going to be at Caspere's sex house when he was, and that was Frank. Frank gave Ray the address at the bar the scene before the shooting happened. Could Frank be behind that mask? I kind of doubt it because Frank is the one who is royally screwed over by Caspere's death, since the city manager had all of Frank's money.

Then there's the question of what the bird mask means. After a little research, the mask most resembles a raven. And I think that means something. Ravens have a long standing as symbols of death or bad omens. In this case, I'd say that's very true. But I'd also argue that there is a deeper, more intricate meaning to the raven mask (if it is a raven mask).

Ravens also have a place in Greek mythology, which seems to be a trend in the first two episodes of the season. In Greek mythology, Raven's are closely associated with (and often act as symbols of) Apollo. In mythology, Apollo used a white raven to spy on his then love, Coronis. The bird returned with the message that she had taken another lover while Apollo was away. Out of anger, Apollo turned the white raven's feathers black.

So now that you're caught up on your Greek mythology, you might be wondering how this relate to True Detective. If the person who is wearing the mask is acting as Apollo, Greek god of the sun, that would tie into the Greek themes the show has produced so far. There isn't much history between Apollo and Antigone (Rachel McAdams' character) in Greek mythology, but that doesn't mean there can't be a connection in True Detective.