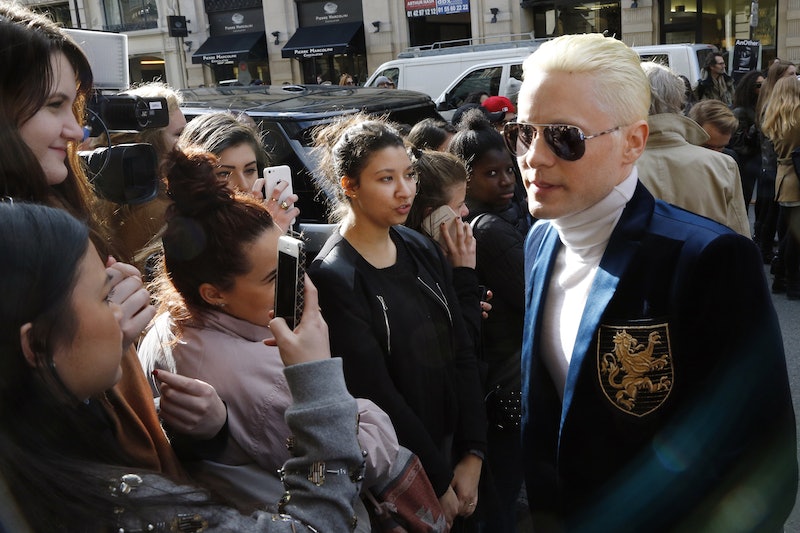 Obviously, number one is our favorite hipster-Jesus-turned-psychopathic-villain, the lovely Jared Leto. Leto is no stranger to method acting. To prepare for his role as a junkie in Requiem For a Dream, Leto shed a ton of weight, abstained from sex, and hung out with junkies in New York City so he could really understand what it felt like to be an addict in withdrawal. For Dallas Buyers Club,Leto dropped 40 pounds and dressed in drag both on and off the set.

Now, as the time for The Suicide Squad's debut inches closer, we are able to see the latest method to Jared Leto's madness as he sends rodents and various other dead creatures to his cast members. There is no doubt in my mind that Leto's Joker will be so extremely creepy.

To get the terrifying visage of The Joker out of my mind, let's move on to the rest of these genius method actors who will stop at nothing to prepare for their roles.

If you hear the words "method acting," there's a very, very high chance that those words are either preceded or proceeded by the words "Daniel Day-Lewis." Daniel Day-Lewis is like the godfather of method acting, going to incredible lengths to get in (and stay in) character when shooting a film. For the film My Left Foot, in which he played Christy Brown, a paralyzed artist, he refused to leave a wheelchair, even off set. For Last of The Mohicans, he spent six months living in the wild and only ate animals that he killed himself as sustenance. These examples are just the tip of the Day-Lewis iceberg, too.

Obviously you can't have a list of great method actors without having Heath Ledger on the list. As we all know, Heath Ledger's role as The Joker in The Dark Knight was something he took very seriously, to the point of holing himself up in his apartment for months on end and running on two hours of sleep a night to put him in the manic, chaotic shoes of The Joker. His performance was incredible and will live on past his tragic, unexpected death.

In preparation for Black Swan, the already-tiny Natalie Portman lost a whopping 20 pounds to look the part of the ballerina she played. Portman also spent a year in a rigorous ballet program and, though she had a stunt double, actually danced in a few of her scenes that made the final cut of the film.

I have a weird obsession with Christian Bale because this dude literally gets lost inside the characters he portrays. It is incredible to think about the amount of dedication and self-control it takes to physically and mentally transform yourself in such a short period of time. My jaw still drops every time that I think about how quickly Christian Bale went from 121 pounds for The Machinist to 190 pounds for Batman Begins.

Christina Bale's yo-yo weight is actually one of my favorite party topics ever and I have pulled out this handy little chart on more than one occasion.

\When she was cast as a former Nazi guard in The Reader, Kate Winslet took method acting to the extreme and got so into her role that she didn't fully recover or get back to her normal self until two months after shooting wrapped.

Though not as extreme as some of his contemporary method acting brethren, Marlon Brando was the O.G. method actor. When preparing for his role in The Men, Brando did not move from a hospital bed in a veteran's hospital for a full month to really get in the mindset of the injured vet he would be playing.

Robert DeNiro's method acting is legendary. He drove the streets of New York City working 12-hour shifts in a taxi to prepare for Taxi Drive, he was rated at a professional level as a boxer when preparing for Raging Bull, and he mastered the saxophone for his role in New York, New York. Oh, and let's not forget the time he grinded down his teeth to look more menacing for Cape Fear. Mmmmkay, Robert DeNiro, I think it's time to take it down a notch or 50.

To prepare for her role as a female-to-male transsexual in the film Boys Don't Cry, Hilary Swank spent a full month living as a boy to get into the proper headset to play the character Brandon.