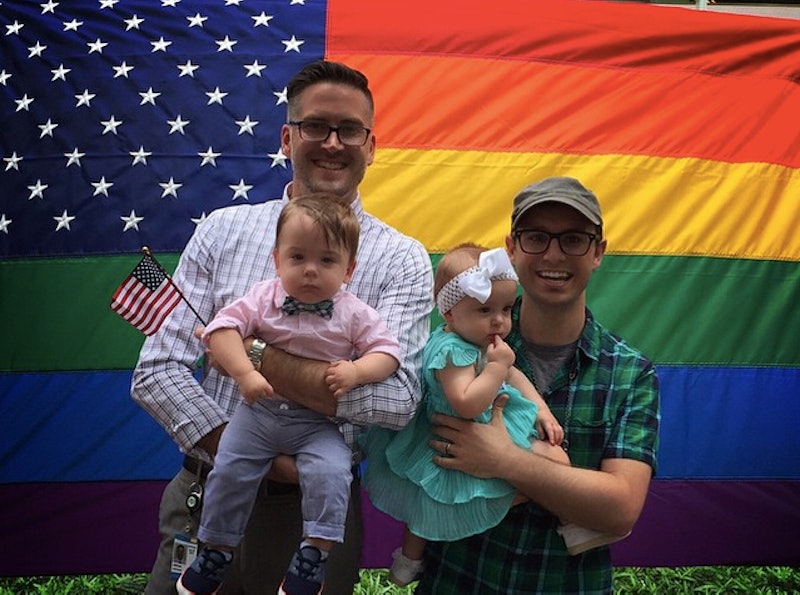 Oh man, my heart is so full right now, you guys. Thanks to SCOTUS being straight-up awesome lately (well, except you, Scalia), America's had one pretty historic week. First, the Court banned housing discrimination Thursday by upholding the 1968 Fair Housing Act. Then they let us keep our health care subsidies (and phew, 'cause that would have sucked). But then SCOTUS dropped what might be the best Friday news ever: gay marriage is now legal nationwide! Soon came the happy dances, the tweets, and perhaps best of all, the heartwarming Instagram photos of gay families celebrating that at last their families can be recognized as "real" — in all 50 states.

These images of gay families are all the more touching when you consider the fact that this ruling's been a long time coming. Aside from the years — well, make that decades — that the LGBT community has been fighting for marriage equality, the decision itself kept the country biting its nails for months. The landmark gay marriage case Obergefell v. Hodges first hit the Supreme Court in April, a consolidation of three other same-sex marriage cases from Tennessee, Michigan, and Kentucky. But rumors of a decision have been coming for weeks. All three of the cases challenged individual state laws that ruled same-sex marriage was illegal, but Friday's decision ruled once and for all that states can no longer ban same-sex couples from marrying. "It is so ordered," declared the Supreme Court.

And needless to say, that news is huge for these 11 families, who could all be seen rocking the biggest, broadest smiles ever today — and are about to have one amazingly emotional Pride weekend.

Yep; it doesn't get much better. And those smiles are no doubt partly due to Justice Anthony Kennedy's moving words, read this morning, which reminded us all that same-sex marriage isn't just about the couple — it's also about the kids. In the decision, Kennedy wrote:

the right to marry … safeguards children and families and thus draws meaning from related rights of childrearing, procreation, and education.

Kennedy also made mention of the fact that the whole "traditional family" thing doesn't actually exist — so who are we kidding, anyway? America (and the world, for that matter) is made up of millions of non-homogenous families, from single-parent households to adoptive families to divorced families. So the argument that children of LGBT parents are somehow worse off than others is a bit moot. "This provides powerful confirmation from the law itself that gays and lesbians can create loving, supportive families," Kennedy added.

Such was the message behind Fisher-Price's recent Pride month partnership with Proud Parenting, an online community devoted to supporting LGBT families. For the partnership, families were encouraged to share group shots, selfies, and more in an online photo gallery, as a means of increasing the visibility of same-sex parenting. The resulting photo gallery, much like all of the images above, is pretty heartwarming — and if you haven't checked it out yet, please do yourself a favor and go there now. (Oh, and get yourself ready for a major case of the feels.) In the meantime, I'll just be over here, refreshing my Instagram feed all weekend long; because luckily, they'll be plenty more where this all came from.