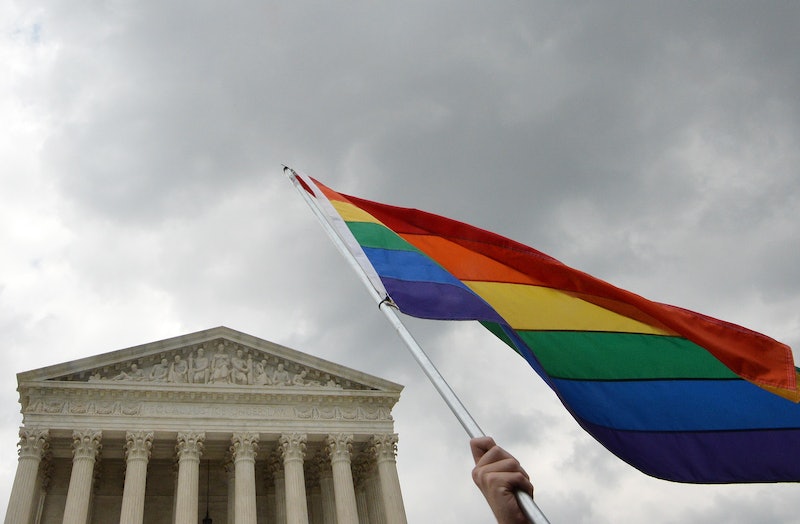 It took just hours after the U.S. Supreme Court ruled in favor of gay marriage on Friday for analysts to start comparing the decision to another landmark case decided exactly 12 years earlier. On June 26, 2003, the Court ruled that citizens had the right to engage in "certain intimate contact" (in this case, sex between two consenting, male adults) and that the state of Texas did not have the authority under the law to infringe on the private physical matters between couples in their own home. Over a decade later, to the day, Constitutional scholars have begun to draw comparisons between Lawrence v. Texas and Friday's historic marriage decision, Obergefell v. Hodges.

Both sides of the marriage argument have cast their opinions on the matter with many decrying the latest ruling as an infringement on state rights.

"Marriage between a man and a woman was established by God, and no earthly court can alter that," wrote 2016 presidential candidate and Louisiana Gov. Bobby Jindal on Twitter Friday. Fellow candidate Rick Santorum called the ruling a judicial overreach, also taking to Twitter to vent his frustration.

"Today, 5 unelected judges redefined the foundational unit of society," he wrote. "Now it is the people's turn to speak ... Stakes are too high to cede marriage to unelected judges."

The outpouring of anger matched the similarly frustrated sentiment that followed the 2003 Lawrence decision. In a stubborn retort against the 2003 Court decision and in response to one of the petitioning attorneys who insisted that the state of Texas had conceded the right to impede on private, consensual matters, Scalia was quoted as saying, "They may have conceded it, but I haven't."

Scalia added in his official dissent that the Court seemed to have "largely signed on to the so-called homosexual agenda."

"If this were simply a decision that said we are going to strike from the books all state laws that prohibit genital intimacy between persons of the same sex, then we wouldn't be deeply frightened or offended by that," explained Fuller Seminary president Richard Mouw, in an interview with Christianity Today that same month. "But this seems to be not the last item on the agenda of a movement that wants to undermine traditional notions of family."

The case itself hinged on a dangerous precipice: one year earlier, authorities in Houston, Texas were dispatched to a private residence "in response to a reported weapons disturbance," wrote the Court in October 2002. A neighbor had reported an alleged "weapons disturbance," indicating falsely to police that one of the men inside the residence was "going crazy." When police entered the home, they found the petitioner, John Lawrence, and his partner, Tyron Garner, engaged in anal sex, which, according to Texas sodomy statutes at the time, was illegal. It didn't matter that the two were consenting adults engaged in intimate relations inside their private residence; under the law, they were (in legal jargon) engaging in "deviate sexual behavior."

"Pause here to consider that bestiality is not considered 'deviate' under Texas law," joked Slate reporter Dahlia Lithwick at the time.

Both men were subsequently jailed for their actions and fined $200 apiece. After their release, Lawrence and Garner appealed, unsuccessfully, several times (including once to the highest Texas appellate court, which declined to hear their argument), before their case was accepted by the U.S. Supreme Court that fall.

Upon the Court's 7-2 ruling that Lawrence and Garner's conviction and the Texas sodomy law were unconstitutional, Justice Anthony Kennedy declared that the right to privacy and personal protections superseded the rights of the government to dictate behavior.

"When sexuality finds overt expression in intimate conduct with another person, the conduct can be but one element in a personal bond that is more enduring," wrote Kennedy in the Court's decision. "When homosexual conduct is made criminal by the law of the State, that declaration in and of itself is an invitation to subject homosexual persons to discrimination both in the public and in the private spheres."

Some analysts guessed that the Court had put off the most recent ruling in order to announce the legality of same-sex marriage on the anniversary of the historic Lawrence decision. Both cases, of course, had weighed in largely on the rights of the LGBTQ community and it was unlikely that the nine Justices had forgotten about it. But whatever their reasoning for putting off the announcement, many felt that the outcome, felt strongly and identically in 2003 when same-sex couples were given intimate protections under the law, was worth the brief wait.

"Twelve years from Lawrence v. Texas to gay marriage," wrote one Twitter user on Friday. "Hopefully this bodes well for other marginalized groups."