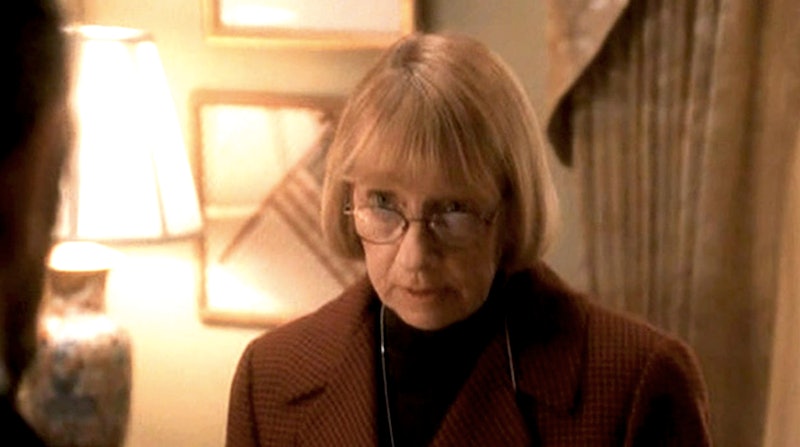 With some shows, picking a favorite character is easy (I'ma let you finish, Michelle, but Uncle Jesse is the heart and soul of Full House). For others, though, it's near impossible: Spike vs. Angel? Rory vs. Lorelai? Chandler vs. Ross? (Just kidding, we all know that's a no brainer.) Such is the case for The West Wing , a show with such a fantastic ensemble that choosing just one member to celebrate is incredibly difficult. Well, for most people. In my opinion, there was no better character on the show than the late, great Mrs. Landingham (Kathryn Joosten).

Don't get me wrong — I love C.J., Josh and the rest of the West Wing crew. But none of them compare to Mrs. Landingham, a character who, though only on the show for two seasons, made an enormous impact on President Bartlet's White House, not to mention the show's fans. From her first scene to her last, the secretary brought constant entertainment to the series, advising the President like a knowing big sister and muttering sarcastic comments to to his over-eager staff.

Unfortunately, Mrs. Landingham died in a car accident at the end of Season 2 (and Joosten passed away of cancer in 2012). The show went on to do great things even without her, including adding a new admin, Lily Tomlin's Deborah Fiderer, but the loss was felt by all — especially President Bartlet, who had to do without the zingers and one-liners happily provided by his first assistant at his expense. In honor of the legendary character, here are 11 times Mrs. Landingham totally told it like it is:

1. When She Had No Time For Anyone's Sass But Her Own

2. When She Wasn't Afraid To Stand Up To The President

4. When She Convinced Him To Run For President Again

He needed a push, and this imaginary sequence, in which Mrs. Landingham told him that if the reason he wasn't running was because he was scared, "well God, Jed, I don't even want to know you," did the trick. What followed was one of the best episode conclusions in West Wing history.

5. When She Told His Younger Self To Get His Priorities Straight

In a flashback, Mrs. Landingham, then a teacher, wouldn't rest until she she got Jed, a student, to listen to her complaints over the pay gap faced by the school's female faculty.

6. When She Was Forced To Issue This Command

7. When She Took The President's Ego Down A Notch

8. When She Had To Say This To Josh And Toby, With This Look On Her Face

Clearly, she was not thrilled.

10. When She Got So Much Enjoyment From Taunting The Press

11. When She Always Had The Answer To This

Every single time. We miss you, Mrs Landingham.