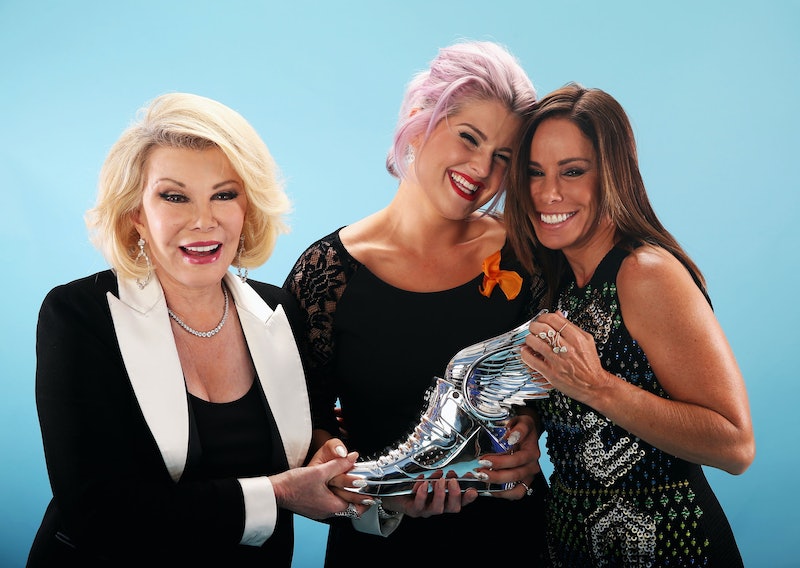 Let's face it: Fashion Police simply will never be the same without Joan Rivers. But just like The Tonight Show post-Johnny Carson or The Daily Show minus Jon Stewart (sigh), the E! series will live on in the pursuit of poking fun at celebrity red carpet style. After the show's new lineup was announced last week, former "Joan Ranger" Kelly Osbourne is happy about Melissa Rivers taking over hosting duties at Fashion Police .

"This is what should have happened from day one," Osbourne said. "Melissa always should have been there." The 30-year-old TV personality and famous celebrity spawn shared her excitement about Joan's daughter hosting the hit show while in New York City this week. Osbourne even called the return of the younger Rivers to the front of the camera "the right decision."

It was practically set in stone that Melissa was taking her mother's seat on Fashion Police after the widespread controversy surrounding co-host Giuliana Rancic's comments about Zendaya's hair that aired after the Oscars. The incident resulted in Osbourne quitting the show and Kathy Griffin leaving soon after her. After the comedian publicly criticized Fashion Police, Melissa called out Griffin in defense of the show, saying "she kind of shit all over my mother's legacy." However, it looks like there's no bad blood between Melissa and Osbourne, who was one of the first people to know about Melissa's new hosting gig.

"When [Melissa] called me to tell me, I was like screaming, jumping up and down because I'm like, continue the legacy!" Osbourne said. Fashion Police returns to E! this summer with Rivers, Rancic, and Brad Goreski.

More like this
Iris Law's Skunk Mullet Is Not For The Faint-Hearted
By Tomi Otekunrin
'The Circle' Season 4 Star Yu Ling Wu Is Already A Beauty Icon
By Erin Stovall
Machine Gun Kelly Wore A $30K Diamond Mani To The BBMAs
By Paris Giles
How To Master Baby Braids, According To TikTok
By Tomi Otekunrin
Get Even More From Bustle — Sign Up For The Newsletter