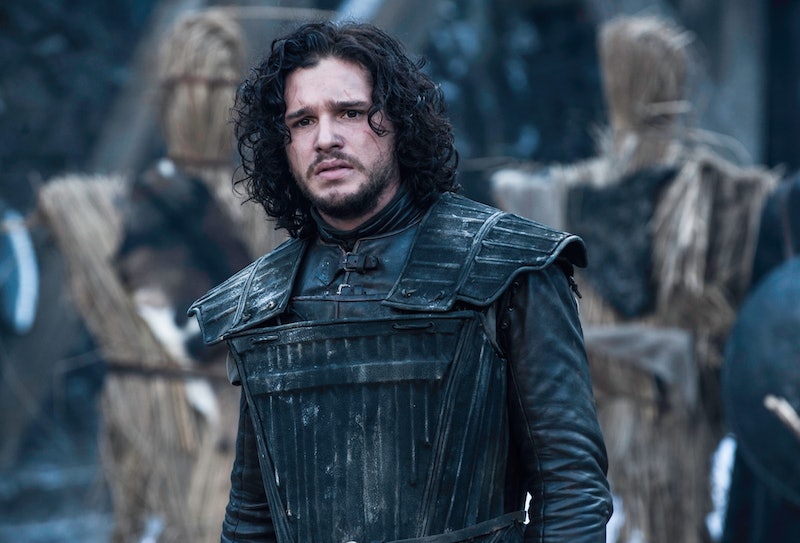 The mega-bummer that was the ending of Game of Thrones Season 5 has me feeling all kinds of wistful for Season 1: Ah, the days of not worrying about whether or not Jon Snow actually died at the dagger-wielding hands of the Night's Watch. Were we ever so young? Sure, it's only been four years since the first season set sail on the HBO seas, and sure, in real-world time, 2011 wasn't that long ago. But as far as GoT is concerned, it feels like forever ago. The reason: So much happens in so little time. A lifetime's worth of action can occur in a single episode, and my memory can retain only so many details about the show. If I'm being perfectly honest, I couldn't tell you what went down at the beginning of Season 5, let alone anything that transpired over the course of the show's first season. The Battle of Hardhome really wiped me out.

While we're on the topic of Jon Snow, here's one of the many things I couldn't remember about GoT Season 1: Did we love the human companion of Ghost the direwolf right off the bat? Or did our adoration for Jon Snow develop over time, like the reluctant friendship between the Hound and Arya Stark?

I scanned through a few reviews of Season 1 eps, and it was pretty clear pretty fast that the audience was wooed by the wondrously coiffed hero right away.

It’s hard to be super sympathetic towards Catelyn when she treats Jon Snow so coldly. There’s no acceptable reason to take out the anger you feel for your husband’s infidelity on an innocent child. She’s actually nicer to Jon on the TV show, if you can believe it. How can anyone hate Jon Snow?

That question is so valid. I might even say it's the most valid question ever asked.

There's just something severely awesome about Jon Snow. It's hard to put one's finger on. I think, perhaps, it's because one gets the feeling that on any other show we might want to punch this character in the face; a rich kid who mopes a bit, trying to find his place in the world. But Jon is so much heartier than his logline.

"There's just something severely awesome about Jon Snow" holds as much water now as it did then.

Plus, we got to see Jon use his wolf to threaten those who would pick on Sam. Of all of Ned’s kids, Jon seems the most likely to be the one who takes up his father’s creed of just putting your head down and doing the right thing.

You know nothing about being not noble, Jon Snow.

For me, though, the best scenes of the episode were with Jon Snow. Distraught at the death of his father and determined to aid his brother, Jon contemplates deserting the Night's Watch. It's only Samwell Tarly and his other ‘brothers' who convince him to stay by reminding him of his vows. With only three scenes at The Wall, the writers packed a lot of punch into surprisingly little screen time.

From The Guardian's review of "Fire and Blood" (Season 1, Episode 10):

Kit Harrington has made a superb Jon, equal parts kindness and arrogance, and he has had strong support from John Bradley's Sam, Jozef Altin's Pyp and Mark Stanley's Grenn to the extent that they are now my second favourite band of dysfunctional brothers (behind Tyrion and Jaime who have the advantage of most of the best lines).

How do you do, shoutout to Kit Harrington? Always happy to cross paths.

On The Wall, we see Jon Snow galloping southward to flee the Night’s Watch and join his brother Robb against the Lannisters; his friends and fellow Night’s Watchmen stop him and convince him to stay on The Wall — as he promised, as is honorable.

FOREVER HONORABLE. And on that note, here's baby Ghost:

I ask you again, were we ever so young?