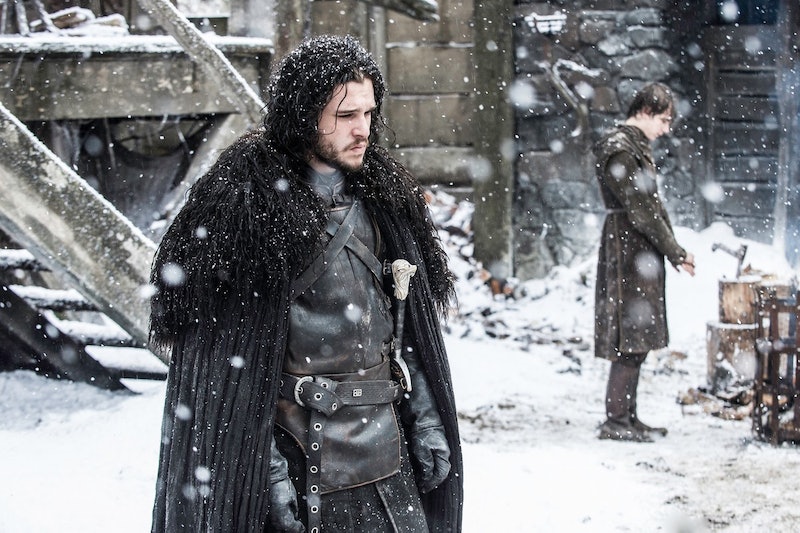 I've got a fever and the only prescription is more Snow. Jon Snow, to be exact. Ever since the Game of Thrones Season 5 finale aired a few weeks back, viewers have become obsessed with uncovering the truth in regards to whether or not Jon Snow is actually dead. And while his stab wounds did look pretty fatal, that hasn't stopped us from theorizing the many different ways our beloved bastard could return nor dampened our confidence that it's definitely going to happen. Why? Because Jon Snow simply can't be gone for good. There's still so much left of his story to tell. (R+L=J, anyone?) We know it. The writers know it. (And the writers know that we know it.)

That being said, there are those select few out there who are hesitant to share this #JonSnowLives belief either because they're choosing to accept the worst possible scenario (that he really is dead) or they just don't care. Either way, it's safe to say that amid all the Jon Snow talk that's been circulating the web these past few weeks, there are some things that us diehard supporters are sick and tired of hearing. So if you ever find yourself in the presence of Jon Snow enthusiasts, you may want to keep these comments on the DL.

First of all, even if Jon is dead (and intends to stay that way), that doesn't disprove who his real parents may or may not be. This means that he could still totally be a Targaryen. Second of all, if anything, this theory just helps to further prove all the reasons why the writers are definitely going to bring him back. Otherwise, why did they make so many references to it, especially in Season 5, if nothing was ever going to come from it? I rest my case.

"But Kit Harington Confirmed His Character Is Dead."

Right, because he was really going to just come right out and divulge a whole bunch of spoilers to the world. Actors aren't obligated to be entirely truthful to the media, so he could've been instructed to lie about it. And technically, he might be telling the truth. Because even if Jon Snow is dead, that doesn't mean he'll necessarily stay that way forever. Whether Melisandre resurrects him or he becomes one of the White Walkers, there are plenty of loopholes that could bring him back to our television screens.

This is the best Jon Snow face I could find that encapsulates my emotions toward you at this time. Look, it's fine if you're not as into the show as I am, but these are characters a bunch of us have grown to love both in the books and on the TV series. We're allowed to rant and rave about it if we so choose. So as long as it's not your gallon of ice cream that I'm sobbing into, I'd say I'm free to express myself in any way I see fit.

"You're Grasping At Straws With All These Theories."

Oh, I'm sorry, are you one of the writers for GoT? Can you, like Melisandre, see into the future via the flames? I didn't think so. Maybe the blood spilling around him wasn't intended to look like a dragon wing. Perhaps his eyes changing color was just a trick of the light. But until we know for sure, leave me and my theories alone. Please and thank you.

"The Actor Is Already Taking On Other Projects."

Yes, Kit Harington recently joined the thriller movie Brimstone . But he wouldn't be the first person to fit multiple projects into his schedule. It's called multi-tasking. Look into it.

That may be true, my friend, but until Season 6 premieres, neither do you.