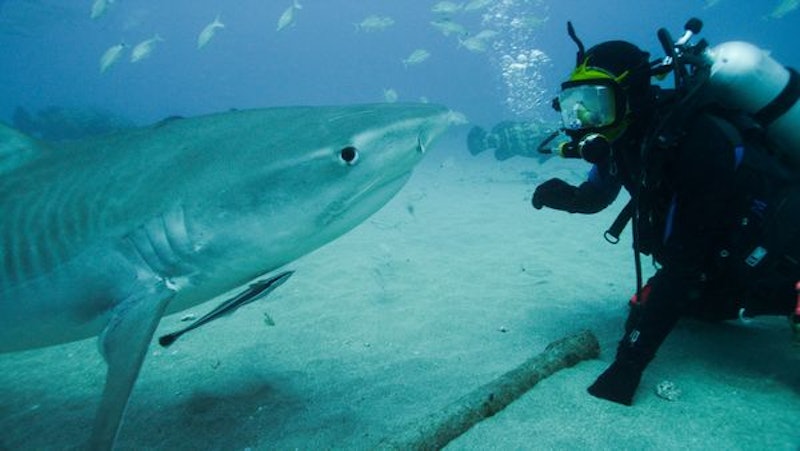 The best week of the year is finally upon us. Discovery Channel's Shark Week 2015 begins Sunday, July 5, hosted by horror film director Eli Roth. Every year the awesomeness that is Shark Week treats us to some of the coolest facts about and footage of these beautiful, terrifying, incredible creatures of the sea. Seriously, Shark Week is like the freaking Super Bowl of animal shows. This year, Shark Week has quite the interesting programming scheduled from chases for sharks that have never been seen before, to episodes about sharks species that have yet to be explored. For those who think there are only a few types of sharks and that all they do is swim around and bite stuff, Shark Week is quite the eye-opening experience. And, there's so much to be excited about this awesome week. So while we impatiently wait for July 5, why not whet our appetites by getting a peek at what's to come?

I'm not sure how the Discovery Channel and all of the shark researchers and scientists keep finding these insanely cool facts to make these programs, but they do and it's the best thing every year. So let's sit back with our shark bite drinks, grab some popcorn, and get ready to watch sharks doing their thing.

The Mako shark is rarely caught on film, until now. This shark is considered to be "fastest of all species of sharks in the world" which means watching it in the wild is going to be an awesome sight to see.

This show "seeks to find answers for a series of Great White shark attacks that have occurred with clocklike precision at the same beach, in the same month, every two years." Creepy!!

Alien Sharks attempts to find the rarest of shark species, meaning this will be some eye opening stuff.

Here's the description for this episode: "Bride of Jaws searches for Joan of Shark, the largest female Great White ever tagged." She sounds like a badass.

The Whole Week — Shark After Dark

Every night of Shark Week, Shark After Dark is hosted by a new celebrity who puts their own spin on Shark Week events, talks with researchers and scientists, shows highlights of what's already happened, and teases what's to come for the rest of the week. This year Eli Roth is bound to bring a horrifying and insanely entertaining twist on Shark After Dark. "Dark" will certainly be the right word for the event.

More like this
'Black Mirror' Season 6 Is Reportedly In The Works, Here’s What To Expect
By Maxine Harrison
The 7 Best Slow Feeders For Cats
By Masha Vapnitchnaia
The 10 Best Cat Puzzle Feeders
By Lauren Moison
My Picky Eater Dog Absolutely Devours This All-Natural Food
By Allison Berry
Get Even More From Bustle — Sign Up For The Newsletter