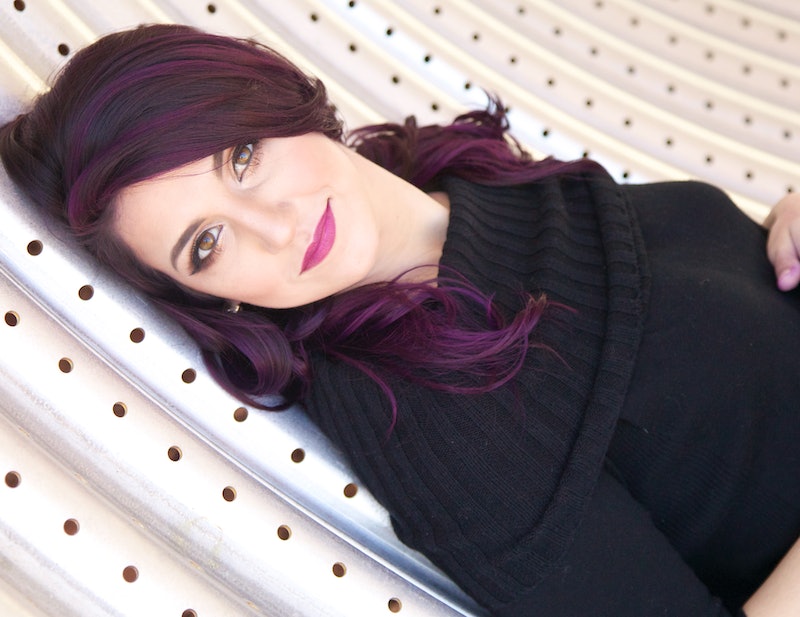 Pixar's latest film, Inside Out, is making waves not just for its monumental success but also because of its complexly layered, Aesopian-like tale that promotes emotional balance and self-acceptance. As a person who has dealt with mental health issues, it took me about two minutes of watching the film before I thought, “Oh, duh. Inside Out is about depression.” And though, overtly, depression might not be the core topic, it's definitely a key issue.

Mark my words, anyone who has struggled with depression or other mental health issues will immediately relate to Sadness’ reluctant but ironclad hold on Riley’s brain. Though Joy is the head honcho in the teen's mind (the Justin Timberlake to Riley's band of emotions, if you will), in the end (spoiler alert), the unexpected main character in Riley’s brain is Sadness.

Inside Out teaches us to embrace sadness, not repress it; to let Sadness take the center stage rather than trying to push her to the side or put her in a space where you don't have to deal with her. Sometimes the best way through the sadness is to dive right into it, the movie says, and once you allow yourself to accept those emotions, things might start to look up.

But what if the main character in your control center of a brain isn't Sadness? What if it's Fear that takes over and runs your emotional headquarters, his tyrannical reign leaving you a quivering shell of a person? Well, then you are probably like me, and while your head emotion may be different than Riley's, the themes of the film still hit close to home.

When I was in my first year of grad school, I was diagnosed with Generalized Anxiety Disorder (GAD). GAD is depression’s best friend (or perhaps a close cousin) and they make for a doozy of an emotional roller coaster. I would generally consider myself a happy person, and I think that those around me would agree with that. In the months leading up to my diagnosis, though, the self that I knew was gone. In her place was a person unsettled.

The first time I had a panic attack, I didn’t realize what was happening to me, but I knew something terrible was coming. I was sitting in a Starbucks and attempting to study (but I was actually journaling about my relationship with my long-term, long distance boyfriend). Things had been really, really rough lately, and I had started to feel like my whole life was crumbling into pieces around me. I was trying to get my relationship and my life sorted out, but was struggling.

I sat in the crowded Starbucks and tried to hold back my tears as I typed on my keyboard when suddenly, I was hit with a cold wall of fear and panic, overcome with a sense of impending doom. I didn’t know what was happening. I packed my backpack in a rush and dashed to my car. I drove the five minutes home, speeding the whole way. I felt like I was racing against the clock, running for my life. I don’t know what was going on but I knew that something really, really wrong was happening.

As I pulled into the parking garage of my apartment, the tears came and huge sobs shook my body as I struggled to breathe. The walls were closing in and I had to get out. I sprinted down the hallways of my building, and when I eventually made it into my bedroom, I internally shattered into a billion pieces.

Imagine a baby pitching a temper tantrum, crying so hard he or she can’t breathe, hyperventilating to the point of vomiting. Now imagine a 22-year-old girl having a reaction like that with absolutely no provocation. That's what I was like.

I don’t know how long I cried for but I know that I couldn’t stop. I have a heart problem, and the adrenaline coursing through my body, coupled with my sobs and gasps for breath, meant that my heart rate spiked and then dropped, leaving me afraid that I would faint.

The pinnacle of what I would later learn was a panic attack (and not a heart attack, like I feared at the time) was when I experienced depersonalization. Depersonalization is a symptom that some with anxiety experience and it's a manifestation of panic where you switch out of a first-person perception of yourself into a more abstract, third-person understanding.

Your reality no longer feels real. "You" as an entity, as a human, doesn't seem to exist anymore. Here I was, my physical body lying on my bed, sobbing, soaked with sweat and stained with tears, heart racing, head spinning. But the "me" that thinks and feels felt as if it was outside my body, floating above it. A tiny voice in my head saw this broken, withering husk of a human that it looked down on and registered that something was off. This didn't make sense: why was my body acting like this? Why did I feel separate from my physical self? I don't know how much time passed before I started to feel like I was me, Chelsea, in my own body again, which I could control.

Learning to cope with my anxiety has been an ongoing process of self-discovery. It's taken me several more panic attacks, nearly a year of therapy, and dozens of terrible days to understand my anxiety. When my anxiety was at its worst, fear would course through my body at the tiniest provocation. Anything related to my relationships, bills, school, you name it: my stomach would drop with worry. I would feel so out of control I would have the urge to make myself vomit so I could feel in control of something. I got stuck in a cycle of fear and anxiety, hysteria, sadness, guilt for being so difficult, and then more sadness because I felt so alone.

I still have bad days and I know I will have periods where things will get out of hand again. I'm in a time of life categorized by change and chaos. Every new element of my life that I experience, I experience with hesitation and a bit of terror. I'm wary of my own reactions because they're so unpredictable. It's unsettling, feeling like you are a ticking timebomb and that anything unexpected might send you into a downward spiral of panic.

But Inside Out gets it. I was floored when I saw it, because the concept of the film so poignantly captured exactly how I’d felt when my anxiety was at its worst. I felt like I was an agent-less subject, subservient to the whims of my emotions just as Riley was totally obedient to whichever emotion was taking over the controls in her brain at the time.

Inside Out spoke to me, understood me. Riley's struggle (however unconscious it might have been) to fight against the sadness she felt was a battle I'd fought myself. Her struggle was my struggle; the disconnect between her emotions and ability to control them is something I still have a difficult time dealing with.

Yet while Sadness was Riley's demon, Fear is mine. Too much fear all at once, too much pushback against that fear. Sometimes it's hard to separate myself from the anxiety. It clearly complicates and problematizes my thought process, but I’m afraid of using anxiety as a scapegoat for bad behavior. Are my irrational emotions a by-product of all this, or is it unfair to blame everything I do on my disorder? I honestly don’t know.

What Inside Out taught me — what I've been struggling to realize — is that I am not my anxiety. I am not my sadness. And I am not my fear. Yes, I am culpable for my actions and my behavior, but I have to remind myself that I'm just wired a bit differently. There's the me that worries incessantly and goes cold with panic at inappropriate times, and there's nothing I can do to change that. But I can hover above it, observe the emotions, let them happen, and wait out the storm until I can sink back into myself with a better understanding of who I am and why I work the way I do.

Every day is a surprise. The future still scares me. I still feel crippling fear when the first of the month approaches and it's time to pay rent. My anxiety comes and goes like the weather. I just wake up and have to see what it's going to do today and weather that storm. Before, I felt weak, and even the smallest disruption threatened to destroy me. But I'm older, wiser, and better equipped to handle my own subconscious, and comforted in knowing that others get what I've experienced. Most importantly? I know that my brain can't dish out anything I can't handle.