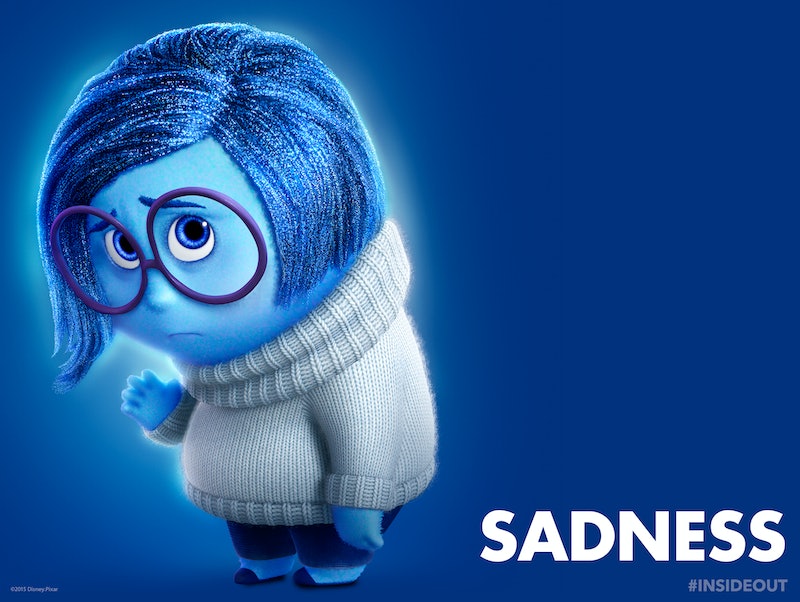 A long time ago, animated movies tended to stick to a similar formula: tell a nice story, maybe add in some drama or suspense, but make sure that it all ends happily ever after. That was before Pixar arrived on the scene. Ever since the studio released their first film, Toy Story, back in 1995, it's completely reinvented the game; instead of just sticking to the kid-pleasing basics, today's best animated movies are sprawling, complex films that leave both children and adults and awe. They're also not afraid to tackle the hard topics, even if it means that "happily ever after" ending might come with some baggage. Take the newest Pixar film, for example; despite being a film about a preteen girl, Inside Out deals with sadness and depression, and it does so in a major, unprecedented way for an animated film.

About the life and mind of Riley, an 11-year-old girl, Inside Out follows the exploits of the five emotions who control her "headquarters:" Joy (Amy Poehler), Anger (Lewis Black), Fear (Bill Hader), Disgust (Mindy Kaling), and Sadness (Phyllis Smith). For most of Riley's life, Joy is the most active, ensuring that the girl has a happy, pain-free existence; thanks to the emotion's constant optimism and skilled maneuvering , Riley's childhood is a picturesque whirlwind of family vacations, ice skating in Minnesota, and bonding with friends. The other emotions all have roles, of course; even the happiest child still throws the occasional tantrum or gets scared of the dark. Yet for the most part, Riley's life is led solely by Joy, and the others, thrilled that their girl is doing well, have no problem leaving the dashboard in her hands.

Everything changes, however, when Riley's family moves to San Francisco, a few minutes into the film (minor spoilers to follow). While at first, Riley's okay, if not thrilled, about the situation, a chaotic situation back in headquarters quickly changes her outlook for the worse. Thanks to Sadness accidentally touching her best core memories, Riley begins to see her new life in a more negative view; she regrets the move, is angry at her parents, and rejects her once-favorite activities. And when Sadness and Joy (who'd tried to stop the disaster) are accidentally kicked out of headquarters, things only get worse.

From then on, it's only Anger, Fear, and Disgust in Riley's mind, and despite their best intentions to keep things afloat, their girl begins to act out, fighting with friends and showing attitude towards her parents — in short, acting like a typical preteen. Yet while all those emotions are certainly darker than typical animated fare, that's not where Inside Out goes deep; most of those situations, like Riley embarrassing herself in front of classmates, are played for humor rather than introspection. It's what happens outside of headquarters, during Sadness and Joy's attempt to return home, that brings the film to new, darker territory.

Until they become stuck together on their journey home, Sadness and Joy know little about how each other functions; Sadness can't understand how Joy has such optimism about life when she views the same things so negatively, while Joy doesn't even get what Sadness' role in headquarters is. After all, until this point, everything in Riley's life was going great — what use did an emotion that only felt darkness have in a preteen girl's mind?

Yet as the two embark on their travels, they begin to open up, and by the end of their journey, they've each learned quite a bit about the other — Joy, especially, gains significant insight into the purpose of Sadness in Riley's life. She learns that feeling bad is not always a horrible thing or something to be avoided at all costs; in some circumstances, it's helpful, even necessary. When Riley feels sad, her parents and friends give her support, the comfort she receives from those she loves soothing and healing her pain. She needs sadness just as much as all the other emotions, as without it, she isn't able to fully understand and express everything she feels.

It's an important lesson, and not just for 11-year-old girls. Feeling all emotions, even the "bad" ones, is a crucial part of human existence; life is not meant to be viewed only through one or two filters. As Joy learns, ignoring sadness, or anger, or fear, is incredibly limiting, and while experiencing life purely as a happy occasion, without the challenges and frustrations that accompany it, may be easy, it's not healthy or beneficial. Inside Out encourages the acknowledgment, and the expression, of all of one's emotions, no matter how difficult it may be.

That said, Riley is, overall, a happy person. She loves her parents, is active in sports and school, and generally views life with a positive outlook. Even when Joy leaves headquarters, she's able to keep afloat, expressing hardly more than the normal amount of angst for a girl heading into her teens. She is not said, or implied to be, seriously depressed, and Inside Out is much more a movie about the way our minds work when they're healthy than when they're ill. Still, it's easy to see how, if Joy never returned to headquarters, Riley could've spiraled into a dark state; even without Sadness' presence, the combination of Anger, Fear, and Disgust could quite possibly have caused serious problems. Inside Out may not be about depression, but it's aware of its potential, and in a film geared towards children and their parents, that's equally important.

There are so few films aimed at young audiences that are brave enough to tackle the issues that'll affect them the most. Depression, and mental health in general, is a major part in the lives of millions, with teenagers especially vulnerable — and often without solid support systems. A movie like Inside Out that encourages expressing one's emotions and confiding in others is hugely important, and hopefully — undoubtedly — it'll inspire viewers who are struggling with their own issues to get the help they need. It's an amazing feat for any movie to achieve, but for an animated film with a PG rating? It's absolutely remarkable, and should be applauded. Inside Out is a must-see movie for many reasons, but especially for its bold, honest, and much-needed take on mental health.

More like this
Celine Dion Reveals She’s Been Diagnosed With Stiff Person Syndrome
By Jake Viswanath
Hailey Bieber Has A "Painful" Ovarian Cyst "The Size Of An Apple"
By Radhika Menon
Ashley Benson Revealed The Whole-Body Effects Of Her Anxiety On TikTok
By Stephanie Topacio Long
Yes, That's Lindsay Lohan's Sister Singing In The 'Falling For Christmas' Movie
By Radhika Menon
Get Even More From Bustle — Sign Up For The Newsletter