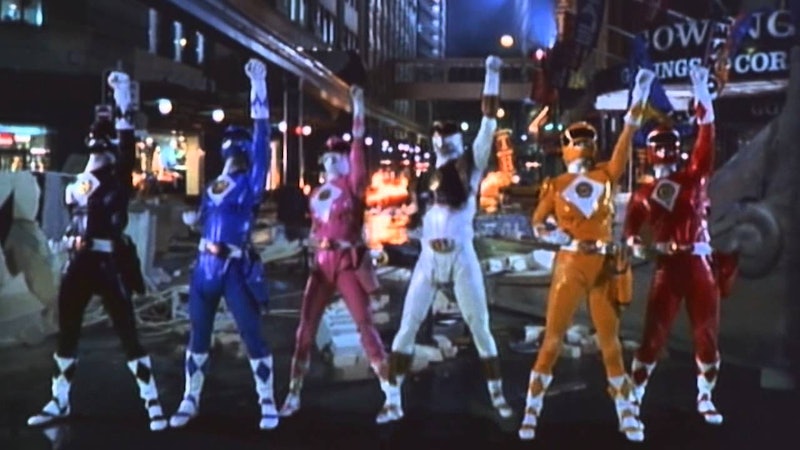 Exactly 20 years ago, on June 30th, 1995, Mighty Morphin Power Rangers: The Movie was unleashed unto the world, and it was the greatest thing that ever happened in the history of all the things... at least, if you were eight years old at the time. I wasn't exactly a "Power Rangers kid" — I never had the Halloween costumes or the action figures — but I did watch the TV version everyday after school, and had a passing familiarity with the mythology. While I may have been only a casual fan of the series (although my mother insists I was rabid about it), I remember seeing the movie as an 8-year-old boy and thinking it was the most wonderful piece of cinema ever created. (Yes, even better than Citizen Kane.) All 88 minutes of the movie fully captivated my childlike imagination and my love for poorly choreographed fight scenes.

Watching it 20 years later was a slightly different experience, though. On the one hand — despite my childhood fandom — I had literally no idea what was happening throughout most of the movie. On the other hand, I had so many nostalgic emotions resurface as I remembered certain characters, plot points, and bad CGI that I, as an 8-year-old, loved.

For those of you who either don't remember or are too young to know anything about it, Mighty Morphin Power Rangers was a part of the Fox Kids weekday afternoon lineup. The series came out in 1993, and was an overnight success — it spawned countless spinoffs, tons of merchandise, and eventually a movie.

Plot-wise, the Power Rangers were five teenagers selected by a "space wizard" named "Zordon" to battle an escaped intergalactic villain named "Rita Repulsa" using giant robots called "Zords." If you have no idea what anything in that sentence means, don't worry — neither did anyone over the age of 13 in 1995. (Like, I wrote that sentence and rewatched the movie, and even I am at a loss).

I would walk you through the intricacies of the movie's plot, but, suffice to say, it's not that important. In short, it starts with Rita Repulsa unleashing a new villain, Ivan Ooze. Ivan Ooze tries to kill Zordon, the Rangers lose their powers, the Rangers go to some planet to get their powers back, they succeed, then they kill Ivan Ooze. The end. In between plot points, there's a handful of fight scenes and horrendously terrible attempts at comic relief.

So, with nostalgia in my heart, I'm going to try my best to set my adult brain aside and look back on Mighty Morphin Power Rangers: The Movie 20 years later to figure out what holds up, what's weird in hindsight, and what parts are absolutely atrocious to the modern eye?

The Film On Which It Was Recorded

Like most movies made only 20 years ago, it's a film still easily accessible to the public, should anyone have the desire to watch it.

My Crush On The Pink Ranger

Even as an adult gay male, it turns out that my crush on the Pink Ranger Kimberly is still alive and well.

My Super Suppressed Crush On Tommy The White Ranger

I think closeted 8-year-old me might have had more than a few secret feelings about Tommy that I wasn't totally aware of at the time. In fact, rewatching the film made me realize that Tommy might have had a lot to do with my early sexual development on a subconscious level. But hey, can you blame me? Look at the guy!

Bulk and Skull were the high school bullies who regularly made life difficult for the Rangers. As a child, I may have found their incompetent antics amusing; as an adult, I can't get past what a bad ripoff they are of Laverne & Shirley's Lenny and Squiggy.

Zordon Is A Giant Talking Head

I totally forgot that the "space wizard" who mentors the Rangers, Zordon, is just a giant pale head projected on a weird looking tube. How did that not terrify me as a child? Likewise, why are these teenagers so immediately trusting of him?!

What's Atrocious To The Modern Eyes (ohmygod SO many things)

Alpha 5 is a more neurotic, less intelligent rip off of C-3PO from Star Wars. His catch phrase is "Ay yi yi," and I hate him.

The song embedded above plays through numerous fight scenes. The lyrics are as follows: "Action boy now!/ Action girl now!/ Are you ready!?" ...and that's about it. What?

Part of me loves the camp value of her character, but most of me is confused as to why ALL of her lines are dubbed over.

The whole movie is designed to sell action figures — that's just a given. Literally, though, there's a five-minute scene where Ivan Ooze goes to a carnival and sells toys to children as a way to brainwash their parents. The children clamor around him, and he instructs the kids to unwittingly enslave their parents by sharing the toys with them. It's a touch "on the nose," don't you think?

Do you remember the last time you tried watch George Lucas' remastered versions of the original Star Wars movies, and you were like, "Oh man, this CGI is lame. Why did they ever do this to Star Wars?" Well, this movie was made with CGI that predates the remastered Star Wars... and boy, is it terrible.

Am I happy that I rewatched this movie? Maybe not. Do I regret it? To be honest, I'm still not sure.

More like this
The OG Power Rangers Are Returning For A Spandex-Clad Special
By El Hunt
Rupert Grint Just Shared A *Major* Update About Ron Weasley’s Future
By El Hunt
Anne Hathaway Shared A "Thrilling" 'Princess Diaries 3' Update
By Darshita Goyal
12 Years Ago, Austin Butler Manifested His Oscar Nom In This Disney Movie Scene
By Jake Viswanath
Get Even More From Bustle — Sign Up For The Newsletter
From hair trends to relationship advice, our daily newsletter has everything you need to sound like a person who’s on TikTok, even if you aren’t.