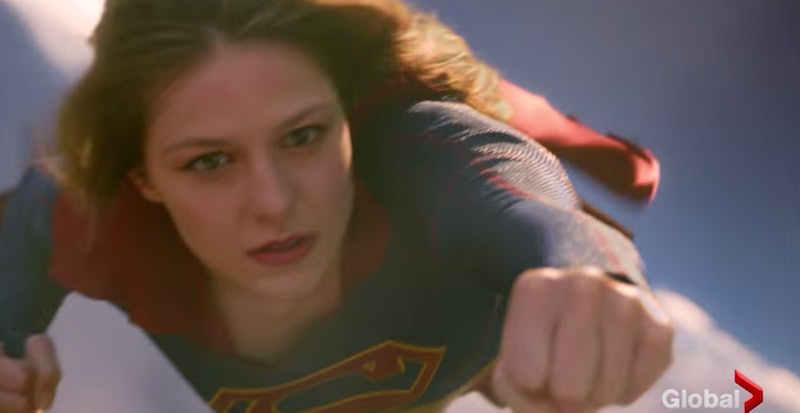 When it was released in May, the first trailer for CBS' Supergirl had some fans worried that the show would emphasize the "girl" part a lot more than the "super." Luckily, the latest Supergirl trailer for the its international home, Global Entertainment, proves that theory wrong — and assures viewers that they don't have anything to worry about when it comes to this show lacking action.

I'll admit: The original trailer (which was more of a "first look" than a trailer, to be fair) made Supergirl look like a rom-com with a bit of superhero thrown in. In that first look, Supergirl, aka Kara Zor-El (played by Glee's Melissa Benoist), awkwardly interacts with a love interest and appears to have a very Devil Wears Prada- like work situation. While it looked really cute, it also did seem like what TV execs thought the fun girly alternative to all the brooding superhero films would be. It certainly didn't help that the trailer came shortly after a highly prescient Saturday Night Live parody of what Marvel would do with a Black Widow movie.

However, this new international promo shows that that original look only highlighted one aspect of the show. There's a lot more action, and a lot more superhero in the new trailer. In the first half of the trailer, we get to see Supergirl's badass origin story: Specifically, that she was sent from Krypton to Earth in order to protect her famous cousin Superman. This, of course, suggest that she is good at more things than being an awkward gal in the big city.

In the second half of the trailer, she's flying, fighting, and stopping trucks with her bare hands. She proclaims her pride in her superhero identity, and, in an awesome and pertinent feminist moment, she wonders why "Supergirl" can't be called "Superwoman." The trailer ends with her proclaiming that "Earth doesn't have just one hero anymore." There are lots of explosions, alongside a few scenes with her Devil Wears Prada/Miranda Priestly-esque boss.

It's difficult to conceive how this series will reconcile the rom-com element with the action, but I'm definitely interested in how they'll pull it off. The first episode will air on CBS Oct. 26.