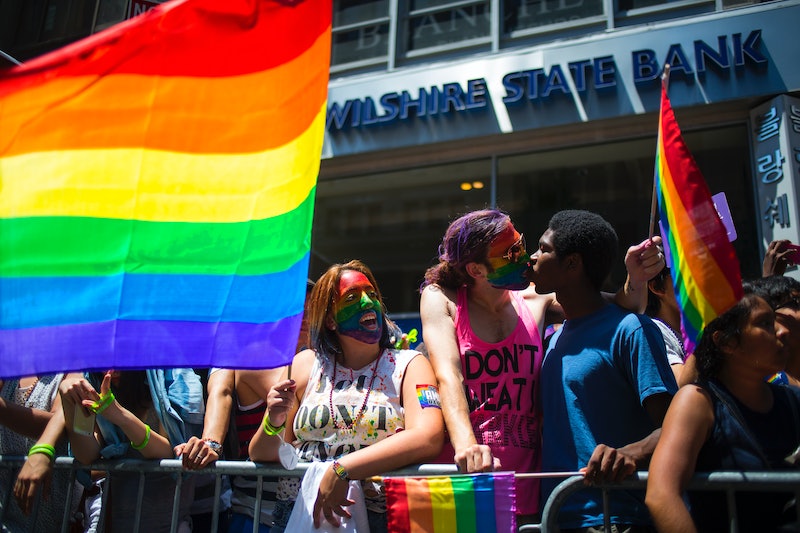 In a landmark decision Friday, the Supreme Court gave same-sex couples in all 50 states the right to marry — finally — and the celebrations since have been pretty rowdy. Saturday and Sunday, LGBT pride celebrations across the country were in full force and then some because of the historic decision. Hundreds of thousands of people were packing into the parades, which took place in New York City, Seattle, San Francisco, Chicago, and cities throughout Europe. Photos of pride celebrations across the country show that they are about embracing love, equality, and self acceptance.

Organizers of San Francisco's Lesbian, Gay, Bisexual, and Transgender Pride Parade, just called "Pride," told the Associated Press they expect about 1 million people to join in what is sure to be a hell of a party. The organization said it will have 240 groups marching in the Sunday parade and more than 30 floats — its largest demonstration in 45 years. David Studinski, march director for New York City Pride, told the AP it would be an "epic" weekend: "I actually just wrote on Twitter that this is the most historic Pride march since the first." New York City expects to have about 22,000 people marching and about 2 million visitors throughout Sunday. Studinski told the AP that the celebrations should still be called marches because the movement still has quite a bit of work to do. These photos of pride marches across the country show why it's so important to love and celebrate people for who they are.

Jim Obergefell, one of the central plaintiffs in the Supreme Court case that overturned marriage bans across the country, even attended pride in Cincinnati, Ohio, according to USA Today. He drove through the parade in a black convertible and waved as people held signs that said "Love Wins." Despite the fact that he told reporters he had no more tears left to cry, he cried and embraced people as they cheered and thanked him, according to USA Today.

Tom Kirdahy, Broadway producer and human-rights attorney, told the New York Daily News that the court ruling represents a “seismic shift” in the tone of New York's parade for this year:

I came to New York in 1981. In 1982 I watched the parade go by. I was too afraid to step into it. The next year I gingerly stepped into it. This year I think people will be running toward the parade, and not gingerly. What's really glorious is that the parade will be throbbing with straight allies.

Even pride marches in London got a little bit crazier after the Supreme Court decision. To mark the historic ruling, the U.S. flag joined the flags of Ireland and Mozambique at the front of the march, representing three countries who have recently recognized gay rights, according to The Guardian.

Pride is historically held to commemorate the 1969 Stonewall riots, which were a series violent demonstrations by the gay community that started after a police raid at the Stonewall Inn, a popular gay bar in New York City. The riots are known as a major turning point in the gay rights movement.

Ruth Hunt, chief executive of Stonewall, an LGBT rights organization in London, told The Guardian that Pride was a wonderful way to celebrate how far we've come, but that people can't forget how much more work is left. She said marriage equality is just the beginning:

The number of reported LGBT hate crimes is on the rise across the UK, our government must address trans-law reform, LGBT people are still being bullied in school and isolated at work, and overseas, many Prides either take place under armed guard or not at all. In fact, it’s illegal to be gay in 75 countries and punishable by death in 10.

There is much more work to do, but this weekend's marches recognize just how great it can feel to be accepted and loved for who you are. Michelle Span, who's celebrating pride in New York on Sunday, told CBS that the message is no longer just about "tolerating" gay people — it's finally about celebrating them and joining in their fight for equal rights:

My daughter and all my friends have struggled over the years and had to hide their love over the years, and now love wins, and that’s all that matters.