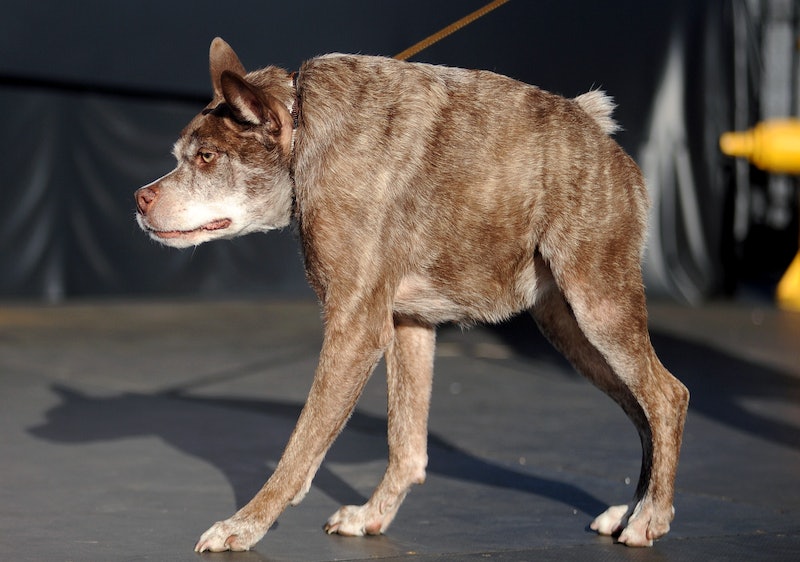 America has found its new top dog, and, well, let's just say he's not the prettiest pup in the basket. Quasi Modo won the World's Ugliest Dog Contest this year at the Sonoma-Marin Fair in Petaluma, California, beating out 26 other canines all contending for bragging rights as the ugliest dog on the planet. Woof.

The competition takes place every year in California as dog owners from around the country bring their pooches to be judged based on a number of different factors, including natural ugliness (of course), attitude, and personality. So while it may help to have bald patches of fur and maybe a wonky eye, it's really inner beauty and charisma that win out in the end — which makes this competition so incredibly special.

As for Quasi Modo? He may not have golden tufts of fur or a perky, wagging tail, but this dog definitely has some winning charm about him, if you ask me. Hailing from Loxahatchee, Florida, the 10-year-old short-spine pit bull-Dutch shepherd has occasionally been mistaken for a hyena and a Tasmanian devil, thanks to his sharp, pointy ears, long back legs, and bristly fur. But just look at those puppy eyes, people! This guy just seems to radiate good vibes. I want to meet him immediately.

This is actually Quasi Modo's second time competing for the title of World's Ugliest Dog. Last year, the honors went to a scrappy little mutt named Peanut (who, I must say, is also ridiculously adorable). According to his contest profile, Quasi Modo (or Little Quasi, as I've started calling him in my head), has multiple birth defects to his spine, and was left abandoned in an animal shelter. Now, having been adopted by two loving parents, the dog is making it a mission to teach people about tolerance, love, and understanding — which is pretty much exactly what the World's Ugliest Dog Contest is all about. As the contest's organizers explain on their site:

A good many of the contestant dogs have been rescued from shelters and puppy mills and the contest has done much to raise awareness for adoption of dogs, and that no matter their physical detractions, these animals are loving companions.

Awareness, acceptance, those warm, fuzzy feelings you get from looking at 27 super cute dogs... sounds to me like everyone here wins. But especially Quasi Modo. He even has a $1,500 prize to prove it.