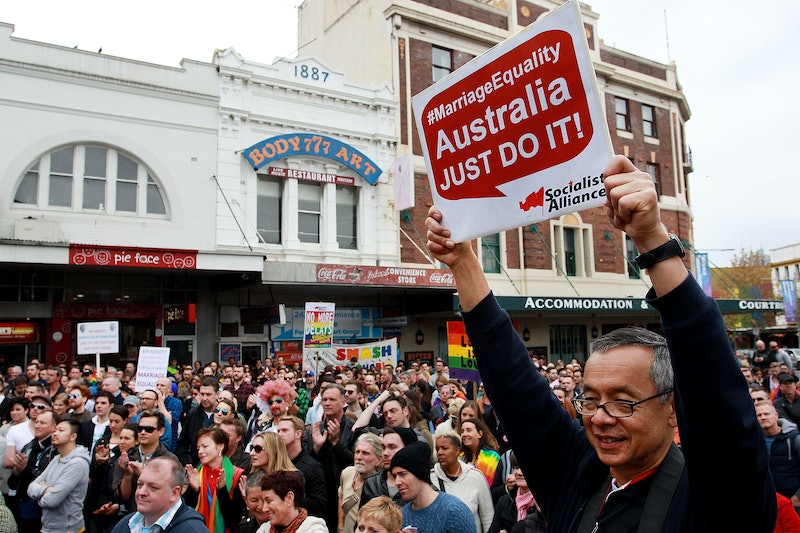 The landmark Supreme Court ruling Friday that gave same-sex couples the legal right to marry in all 50 states could have broader, worldwide implications. Though the ruling will have no legal jurisdiction internationally, gay rights activists in other countries say the decision could help their movements, according to the Associated Press. What country could legalize gay marriage next? Activists say the Supreme Court decision could impact the Philippines, India, or Australia, among others.

Same-sex marriage is legal in 21 countries, according to the Pew Research Center. In Mexico, some jurisdictions allow gay couples to marry while some are more restrictive about with rights and benefits. Activists told the AP that the U.S. ruling will only help influence more attitudes internationally, just as the U.S. was influenced years earlier when some European countries easily accepted same-sex marriage. Activists in the Philippines said the Supreme Court decision could be particularly useful because the country's legal system is largely based on the U.S. system. Philippines civil code limits marriage to a union between a man and a woman, but lawyer Jesus Nicardo Falcis III is challenging the proviso's constitutionality. Most countries are either doing that — using a court system to establish constitutional rights or overturn unconstitutional bans — or they are putting marriage to a popular vote, which Ireland did when it legalized gay marriage in May.

Argentina was the first country in Latin America to legalize gay marriage five years ago, according to the AP, and it believes it was pivotal in the U.S. fight for marriage equality. Esteban Paulon, president of the Argentine Federation of Lesbians, Gays, Bisexuals and Transsexuals, told the AP his organization provided documents to the lawyers arguing the Supreme Court case that became the basis for marriage equality. He said the decision could have a big impact on other Latin American countries:

Sometimes U.S. influence is negative, but we believe in this case it will be positive and accelerate the process of approving gay marriage in other parts of the world.

In India, the SCOTUS decision could mean doing away with criminal laws. In 2013, the Indian Supreme Court reinstated a colonial-era law calling homosexuality an "unnatural offense" that is punishable by 10 years in jail, according to the AP. Police have allegedly used it to harass people and demand bribes from gays. Ashok Row Kavi, head of the Humsafar Trust advocacy group, told the AP the SCOTUS case might make the Indian Supreme Court feel so uncomfortable that they are forced to reexamine the issue:

In the light of globalization, the (Indian) Supreme Court judgment is being cited as a totally reactionary judgment. A judgment that goes against the whole concept of human rights which had been on a progressive upsurge in India.

Same-sex marriage is still not legal in almost all of Asia, most of Western Europe, parts of Latin America, and all of Africa except for South Africa, according to Human Rights Watch. A good majority of these countries — about 75 — have criminal laws against homosexuality.

A member of the small gay community in Jordan spoke to the AP about the Supreme Court ruling on the condition of anonymity; he feared the consequences of being identified as gay. Jordan does not have criminal laws against being gay, but it is still considered a taboo. He told the AP that he hopes the U.S. decision will help influence the rest of the world until marriage equality makes it to Jordan:

In this region, we are going through the dark ages, and when we come out, we will move toward full rights.