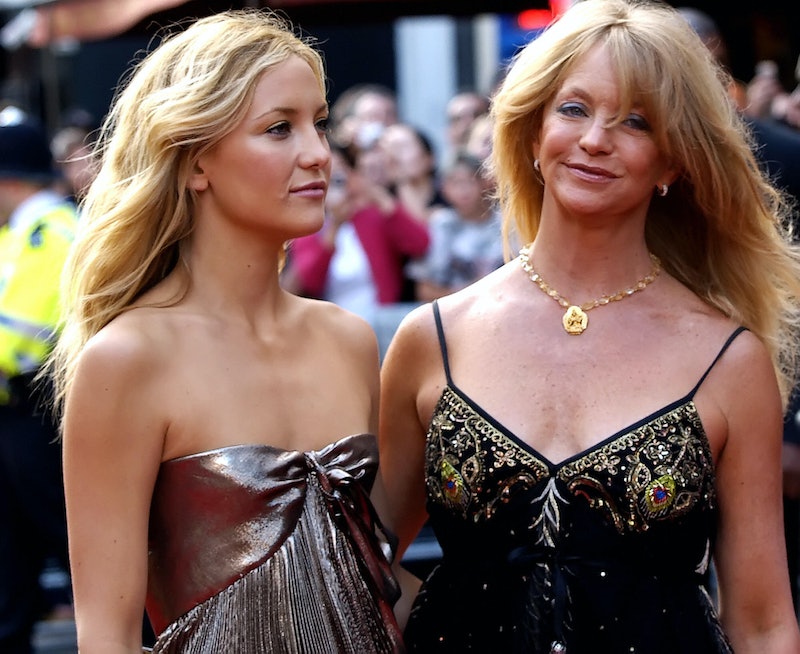 Nobody has a perfect family. I think we can all admit that we have grievances or issues with our relatives in one way or another. But it's a whole different ball game when you're a celebrity and have to deal with those familial sensitivities in a public forum. Especially when it's something as deeply personal as the rift between Kate and Oliver Hudson and their biological father, Bill. On Father's Day, Oliver posted a childhood picture of himself, his sister Kate, and their birth father, but the post was definitely more sarcastic than it was sentimental. He entitled the Instagram, "Happy abandonment day... @katehudson," referring to the fact that he and Kate apparently don't have a relationship with the man they were pictured with in the photo. Now, though, Bill Hudson has responded, telling The Daily Mail:

"That was like a dagger to the heart. If what he wanted was me out of their lives, then he’s succeeded. I don’t want to see either of my eldest children ever again. It’s over. I say to them now, 'I set you free.' I had five birth children but I now consider myself a father of three. I no longer recognize Oliver and Kate as my own. I would ask them to stop using the Hudson name. They are no longer a part of my life. Oliver’s Instagram post was a malicious, vicious, premeditated attack. He is dead to me now. As is Kate. I am mourning their loss even though they are still walking this earth."

I suppose that everyone involved is entitled to their own feelings and opinions. Yet that doesn't mean that this isn't a terribly sad circumstance. A parent's love is said to be unconditional, but it's apparent that in this particular situation, the eldest Hudson involved isn't quite believing of that sentiment. The publication further explains that Hudson defended himself by telling the Daily Mail that Goldie Hawn set the ill will in motion, saying,

"When we split up, she never had a bad word to say about me. But when Kurt [Russell] came on the scene, the narrative changed and I became the big, bad wolf. I would say to her 'Goldie, why are you trashing me and saying I’m an absent father when it’s simply not the case?' and she’d laugh and go 'Oh Bill, you know it makes for a better story."

Whether or not Hudson's claims to The Daily Mail are true or not, one thing is for certain. This situation, exacerbated by his damning statement, does not, "make for a better story." It makes for a sadder, more troubling one, and we wish Kate and Oliver all the best in dealing with their birth father's claims.