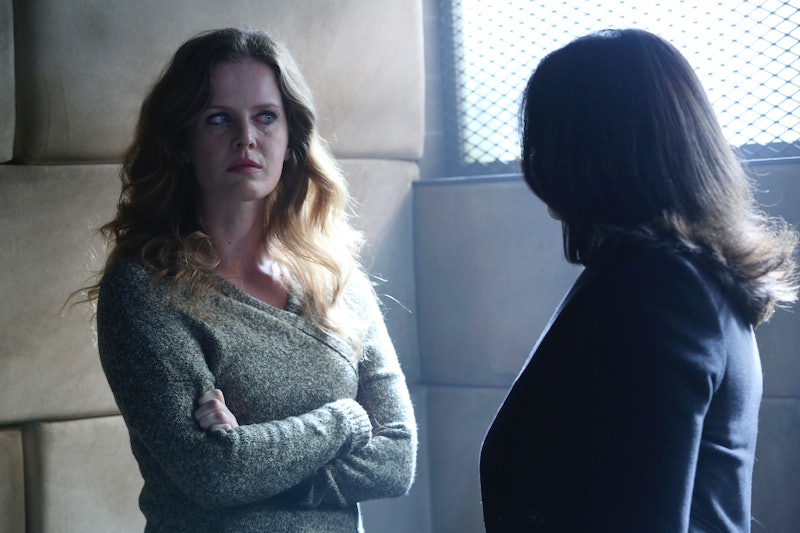 While we're all waiting (not so) patiently for Once Upon A Time Season 5 to begin, we don't have much else to do besides speculate on what awaits us once we return to Storybrooke this fall. Things as we left them are, needless to say, a bit of a mess. Emma's the new Dark One, Gold's in a magical coma, Henry's the new author, no one knows where Merlin is — and oh yeah, Regina's long-lost but recently returned wicked sister, Zelena, is pregnant with Robin Hood's child after tricking him by killing his wife Marion and impersonating her likeness. That last bit remains one of the most uncomfortable and unnecessary storylines in the series' four seasons, but it's happening — Zelena will definitely give birth next season — so we're going to have to deal with it, one way or another.

As it stands, Zelena is currently in some basement holding cell with an anti-magic cuff on her wrist and a bad attitude, to boot. Regina seems to be rather unfazed, for now at least, at the idea of her boyfriend fathering a child with her estranged and evil sister who's tried to kill them all on several occasions, but I suppose she's got bigger fish to fry at the moment. The point is, Zelena's pregnancy is going to come to an end soon, and then there will be a baby of some sort (you never know what's going to happen on this show) to deal with in one way or another. And while viewers of the show seem rather flummoxed on how exactly it'll all go down, I think it should be vaguely comforting to consider the fact that the showrunners are likely in the exact same boat.

It seems reasonable to assume that the whole "Zelena gets pregnant" storyline was approved because it fit the idea that Zelena was intent on destroying Regina's life in every possible way. While it would seem perhaps more straightforward and effective for Zelena to maybe have gone after Henry or destroying Storybrooke or sending Regina back to the Enchanted Forest or literally anything else besides what they eventually went with, I suppose it fits a greater societal narrative that a woman's happiness is largely tied to the man she's involved with. That Once writers were willing to excuse what is essentially a rape storyline for the sake of proving a point — that women are competitive over men and consider romantic dalliances to be the most important thing in life — is disheartening, to say the least. But Regina, ever growing and surprising us these days, managed to at least make a good point as she addressed Zelena in her cell: Robin Hood isn't her happiness, he's just part of a bigger picture. Sorry, sis.

Because this is a show about fairy tales, it's highly unlikely that Zelena's child will be "normal" in any sense of the word. Believing that she'll give birth to a non-magical baby and be so overcome by the experience of motherhood that she'll be a changed woman who desperately longs to connect with her sister and make amends for so many years gone wrong is not only foolish, but it's reductive and even more unrealistic than the fact that she got pregnant in the first place. After all, it's not like she conspired to conceive this baby with Robin because she was desperate to become a mother. She did it to get revenge, so I doubt we'll hand over any Mother of the Year awards anytime soon.

Of course, I am aware that pointing out the issues Once has (and this is just one of many) does nothing to fix them. But when it comes to this storyline, I'm literally lost for suggestions. I'm unsure how writers can work their way out of this whole in a way that would be thoughtful and cautious — or how they can ensure that we still care about Zelena, in one way or another. Sure, she may never endear herself to audiences as Regina has done over the years, but even villains need humanity if we're expected to fear or loathe them. Otherwise, they just become props we could have done without. I don't know that Zelena will ever have a redemption story, if she deserves one or if it would even be believable if one was written in, but it's a shame to realize that a character's potential has been all but squandered by one very big plot misstep.

This criticism applies only to the character and certainly not to Rebecca Mader, the actress behind Zelena who may just be the Wicked Witch's saving grace. Mader brings a fiery joy to the role that is constantly bubbling below the surface, and that energy has made Zelena worth watching, even when what Zelena was doing was cringe-worthy, as it so often has been thus far. Now that we know we'll be seeing more of Zelena and Robin (Sean Maguire) in Season 5, we just have to keep our fingers crossed that she can come of this whole thing in one piece — and with the audience's sympathies intact.

More like this
'Heartstopper's Kit Connor Revealed His Hopes For Season 2
By Nola Ojomu and Sam Ramsden
'Gentleman Jack’s Cast & Crew Are Keen On Season 3, Too
By Frances Stewart
'Ghost In The Shell: SAC_2045' Was Only Supposed To Last Two Seasons
By Kadin Burnett
'Bridgerton' Season 4 Will Likely Focus On This Brother's Divided Heart
By Grace Wehniainen and Alyssa Lapid
Get Even More From Bustle — Sign Up For The Newsletter