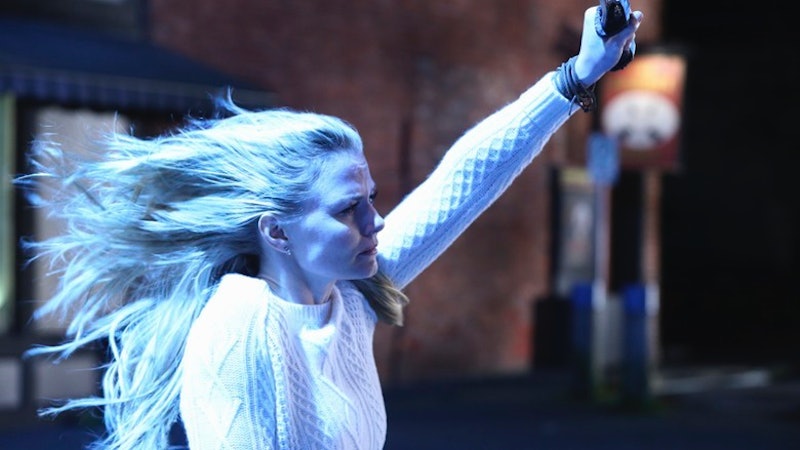 It truly pains me to say this, but Once Upon A Time Season 5 is still so, so far away — about three months, if you want to get particular — and there's still so much we don't know. In fact, we don't know much of anything when it comes to actual storylines. Everything is up in the air and we've been left with so many unaswered questions, especially now that Emma is the new Dark One, Zelena's having Robin Hood's baby, Gold is in a magical coma, Lily's back in town and coming to terms with her dragon identity, Henry is the new author... you see where I'm going with this, right? We've likely got a pretty heavy season coming, but that's how we like it, right?

While ABC and Once creators have been keeping all the gossip pretty under wraps when it comes to what lies ahead for the residents of Storybrooke, we're not completely in the dark. Little details have leaked here and there, and, while putting them together won't really provide any clearer picture of what's to come, it's at least something to go on. Plus, it's all we've got for now, so it'll have to do.

Here's what we know about Season 5 so far.

Why is it SO FAR AWAY?! Seriously, what are we supposed to do the rest of the summer? I mean, besides reading fanfic and writing meta articles for online websites, of course...

2. We're Going To Be Dealing With A Seriously Dark Emma

I mean, probably? Jennifer Morrison is reading old fairy tales to prepare for her character's new turn as the Dark One, but I'm still not convinced we need to be too worried yet. However, it's pretty safe to assume that Season 5A will center on Emma's dark side.

3. We're Going To Be Looking For Merlin

The Apprentice told us during "Operation Mongoose" that Merlin is the only one who can stop the Dark One, since he's the one who created him (which was a pretty dumb idea, you have to admit). Given that finding him is going to be central to help Emma, at least in theory, trying to locate him is a serious thing.

Rumple's mother, Evanna, is supposed to be pretty different than her son, but we'll find out just what she was like via flashback scenes that should appear next season. Showrunners are currently working on casting the role, but I can't wait to see what she's like. If nothing else, we'll get a real insight to what's made Rumple who he is.

The casting notice for King Arthur & Guinevere went out at the same time as Merlin's, which makes me think that we might find Merlin in Camelot, and end up there sometime next season. It's anyone's guess as to what any of these characters will be like, and how far they'll deviate from their Disney counterparts, but it's exciting, no?

6. Will Scarlett Won't Be Around Much...

Michael Socha was done so, so wrong. He was a regular cast member during Season 4, but barely got any screen time at all. Now, he's been demoted for Season 5. He'll still probably be around in some way or another, but don't expect to see him much.

Rebecca Mader and Sean Maguire were featured actors during Season 4, but their ridiculous storyline (you know, the whole "Zelena killed Robin's wife, impersonated her, and then tricked Robin into getting her pregnant" insanity) will be a massive part of Season 5, so the actors have been upgraded to regulars. Whether this bodes well or not is too early to tell, but I'm feeling pretty "meh" about the whole thing at the moment.

8. The First Episode Of Season 5 Has Been Written

Adam Horowitz likes to tease Oncers mercilessly on Twitter (in the best way possible) by offering little looks into what goes into making the show. He let everyone know when writing on the script for 5x01 began, and we also know it's finished now. I need to see what's in it, and I'm sure I'm not the only one. How many days until the premiere again?!

More like this
Only 3 Of The One That Got Away Couples Seem To Still Be Together
By Brad Witter
Everything To Know About The Terminal List Season 2
By Kadin Burnett
6 Shows Like Stranger Things To Get Over Your Emotional Season 4 Hangover
By Kadin Burnett
Did *That* Character Really Die In The 'Stranger Things' Season 4 Finale?
By Grace Wehniainen
Get Even More From Bustle — Sign Up For The Newsletter